Four of the dealership’s burnt cars which protesters attempted to steal stood outside the gates in Jules Street.   The Salajee family has had the dealership since 1991. Owner Abdallah Salajee said when they closed shop on Saturday afternoon “everything was fine”.   Salajee said they were alerted to the violence in the area on Sunday by the owner of a workshop next door.   Very sad news. 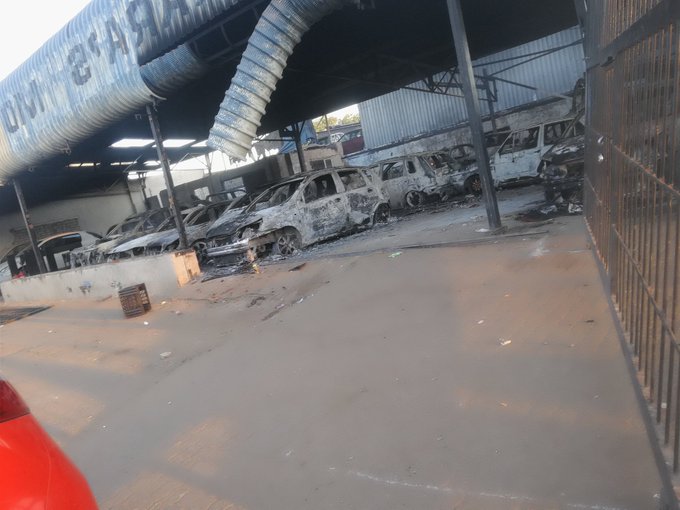 ‘I’m ashamed to be a South African’ – shop owner after Jeppe violence.     About 2km from the busy streets surrounding the Jeppe police station, several car dealership and shop owners in Malvern, Johannesburg, pick up the pieces after protesters ran rampant in the area on Sunday.   Tears flow as family members of Salbro Auto hopelessly walk through their car dealership which has been burnt to the ground.   Nothing but burnt down frames of 40 cars, which were once worth millions, are left.

“Overnight things happened, you come back to nothing on Monday morning. Last night there was not a minute of sleep.   “We feel terrible and we can’t handle it. You can’t even complain to the police or anyone,” he told TimesLIVE.

He said the total value of damage and cars destroyed were estimated to be R2m. The cars were not insured.    “We have to clear up and start from scratch. We just have to turn to God and pray,” the emotional Salajee said.    Violence erupted in the area on Sunday after the mob looted and set alight several shops in the area. Dozens of cars were torched at dealerships.   Many of the 41 people arrested by mid-morning on Monday were caught in the act – looting shops or carrying stolen goods.   Eight suspects were arrested inside a shop at Vusimuzi informal settlement, where there was more looting in Tembisa. 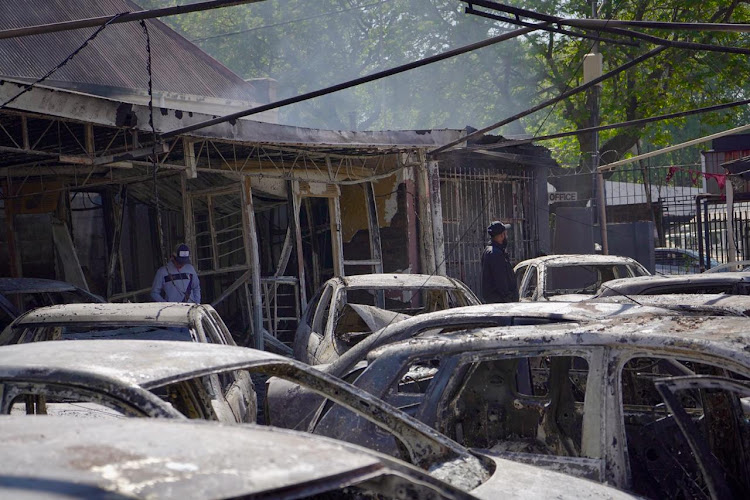 By Monday morning, the streets were buzzing with people, some walking around drinking beer while others took pictures of the damage. The streets were lined with  broken glass, empty rubber bullet shells and burnt tyres.

Isaac Hlatshwayo said he noticed a group of people moving up and down Jules Street at 9pm on Sunday.

Hlatswayo lived in a backroom of the second dealership the mob targeted at 2am on Monday.

“They broke the big gate open and then they came in. They moved two cars out and came into my room where I was sleeping and took some money from me, which was about R120.”

He said the group set a car parked in the corner alight which then ignited all the other cars.

The owner of the dealership, Obinna Henry, said the more than 30 cars were worth millions, pointing to a burnt down Audi TT standing in the back.

By mid-morning on Monday, a local liquor store owner started loading all his stock on a truck. A police Nyala with armed officers stood by. The shop was not looted during the violence.

“I think we are the lucky ones who did not have our place burnt down,” the man said.

Resident and shop owner in the area Lerato Peete said she was “ashamed to be called a South African”.

“In fact, I denounced my South African connection on this day. How is it possible that a black person can be foreign in Africa. Who is a foreigner in Africa?

Police Minister Bheki Cele has arrived in the Johannesburg CBD after chaos erupted on Monday.

It’s true , check out this from today – they burning the trucks trying to deliver food to shops . 🤦🏻‍♂️ pic.twitter.com/90yYrm0psm

3 gedagtes oor “Violence in Jeppe – South Africa – AND other”