George Soros, FARC, Norway, Cuba, the UN, and the European Union. 6 reasons why Colombia cannot declare “Sovereignty” on July 20.  The July 20 celebration parade not only constitutes a vulgar histrionism about the true situation of diplomatic dependence on Colombia, but directly an explicit deception about the famished sovereignty of the territory in the face of foreign agents in the country.

Communism is not working at all – why is the communists in South Africa so quiet about this?   That brings corruption, poverty – no farmers and no food.   It is also now back to private ownerships.    That was in April 2018 – The departure of Raul Castro  as president of Cuba will mark the first time in sixty years that the country will not be ruled by someone with the surname Castro. While Raul carried out some incremental reforms, the legacy of Raul and his brother Fidel is one of a long-repressed, economically stunted nation,  says  Christopher  Sabatini, lecturer of international relations at Columbia University’s School of International and Public Affairs and executive director of Global Americans.   BUT George Soros is also involved here – more about that.
Cuba “Moves Away From its Communist Past” but is still “socialists” – 2018 (Soros)

The recent celebration in Colombia of the July 20 parade, presented in commemoration of the independence of the Spanish crown, constitutes a distortion of the current political reality of the country. Specifically, in recent years, Colombia’s degree of political dependence on international actors has not only increased, but has occupied institutional spheres that had not been occupied by international actors at any time in its recent history.

Specifically, to date, the decisions taken by the administration in the sense of protecting the so-called “Havana Agreements” not only eliminates national sovereignty, but also serves as the basis for more advanced processes of domestic political domination by international actors constituted as a country or as private organizations.

In sum, the so-called “legal framework for Peace” legitimized by the administration of Iván Duque after Santos leaves, not only prompts the government to submit periodic balances to “international guarantors” such as Norway and Germany, but also submits any agent to condition their policies to the regulatory framework created in favor of the FARC drug trafficking group. 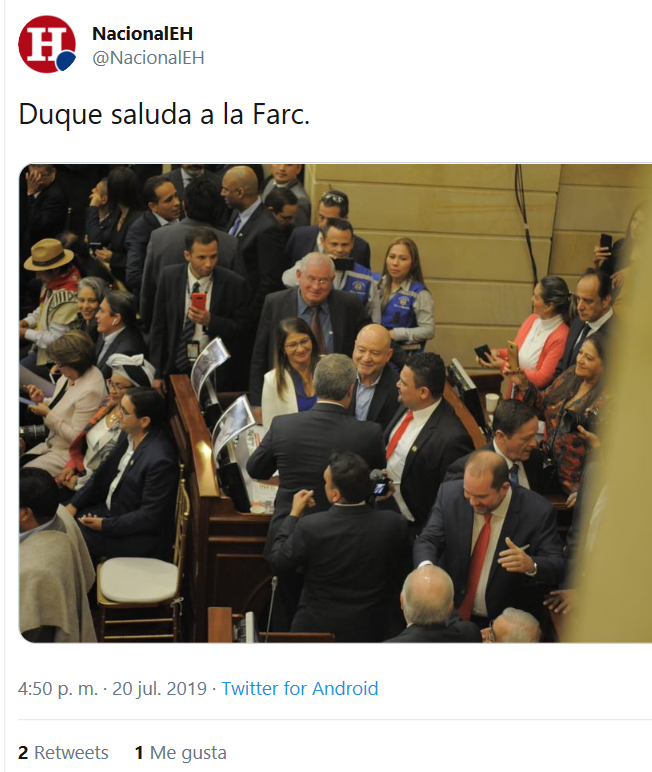 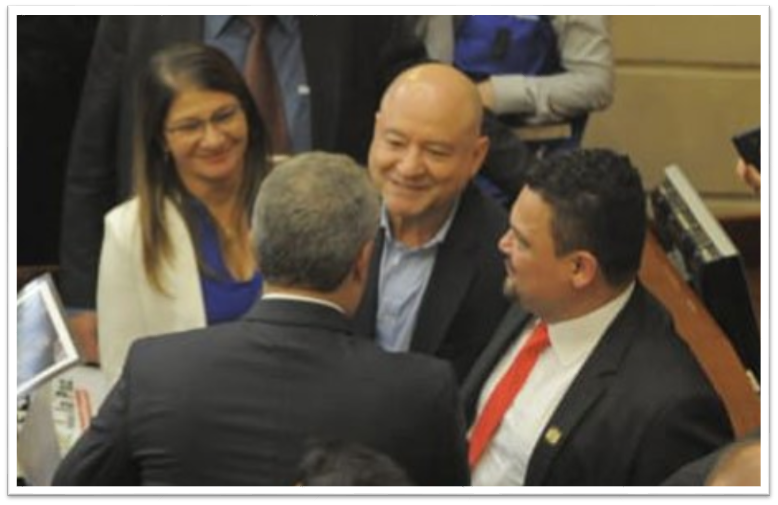 Thus, the installation of the Congress of the Republic where President Iván Duque not only agreed to tolerate the secretariat of the FARC drug trafficking group in Congress, but also approached to greet his leaders in parliament, not only constitutes a dishonorable scenario for the Colombian institutions in their fight against the impunity of terrorism, but an explicit submission to figures that did not even submit to the terms of electoral participation established in the 1991 Constitution, creating their own seats in Cuba, with the consent of the regime of Castro.

In these circumstances, Colombia as a political project is not only kidnapped by international agents part of the Habanero institutional framework, but also lacks the political will to eliminate interference in internal affairs, excluding itself as part of numerous treaties linked to the diplomatic scaffolding of the chancellery. 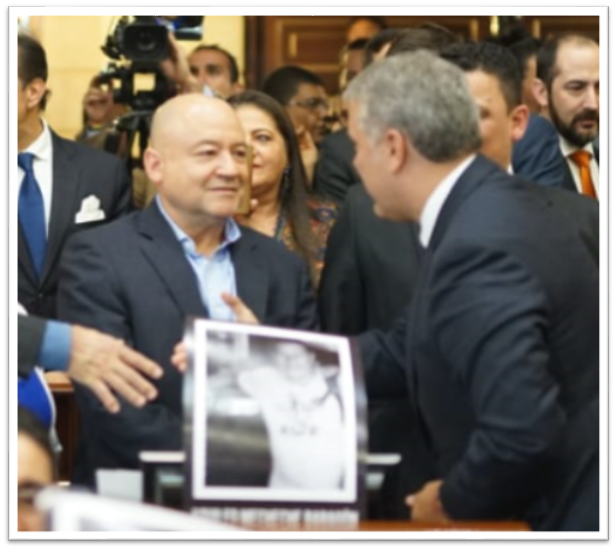 As if that were not enough, the processes of diplomatic domination of international actors are not only conditioned in Colombia by subjects of international law such as the States, but also by organizations such as the Open Society Foundation, which since the 1990s has financed with figures billionaires NGOs that are actively involved in the decisions of all past administrations, such as guerrilla-related publishing projects such as “Pacifist” or “Open Truth”, as well as NGOs that establish neo-Marxist ideology processes in the territory such as “De Justice ”or“ Human Rights Watch ”. 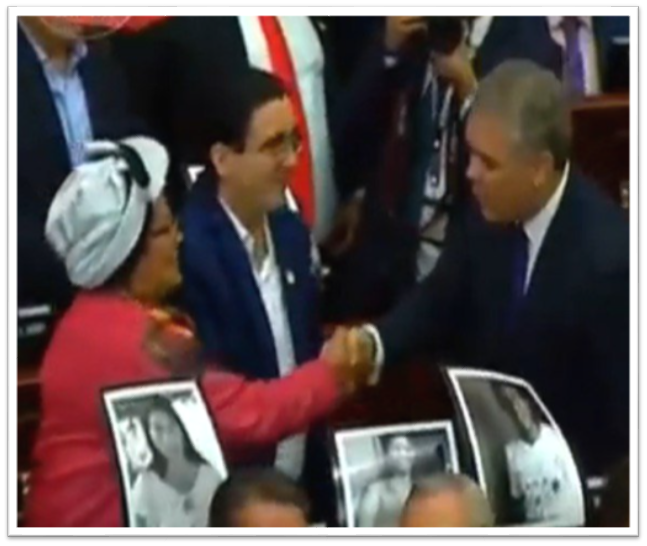 As reported by El Nodo on February 12, only in the financing components of the Open Society, from abroad, for organizations based in Colombia, the NGO of George Soros estimates to invest up to $ 7.4 Million dollars, which automatically It becomes an international intervention in the domestic affairs of the nation.

“On January 10, the official website of the Open Society Foundation, the main financing appendix of radical leftist activism in the world of George Soros, publicly announced the destination of USD $ 2.6 Million dollars for the far-left NGO” Dejusticia “, led by Colombian judicial activist Rodrigo Uprimny. The donation, as used by the Open Society, was “justified” by George Soros‘ need to create a “fairer” society. In the midst of the announcements, the Open Society also pledged to get up to USD $ 7.4 million for the same NGO until before 2025, in a need to “bring justice to the less favored groups.” 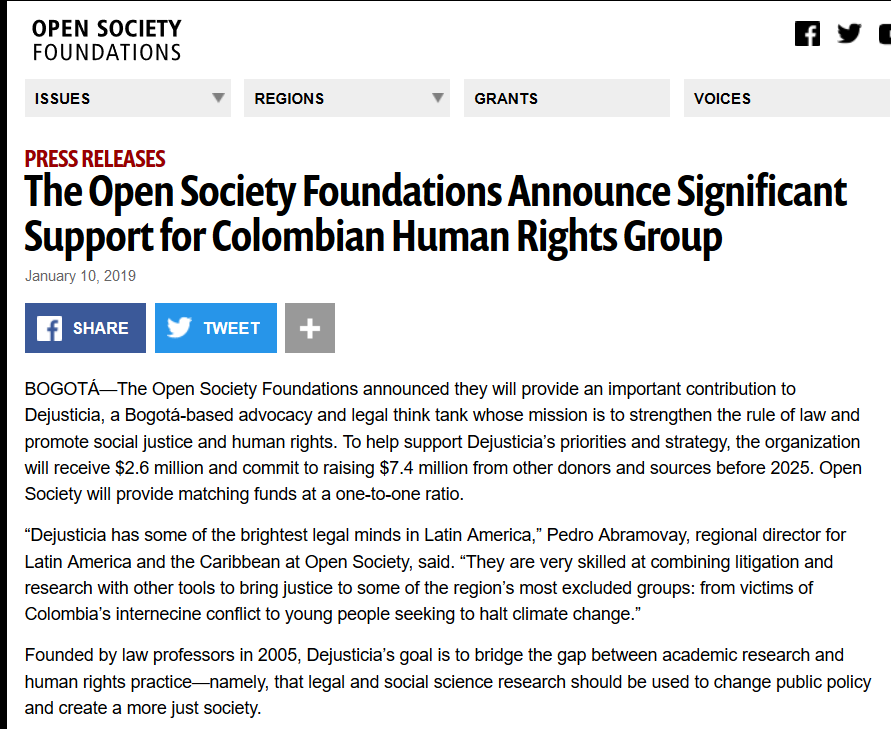 The reality, however, is that the sovereignty of Colombia is not only subject to these onerous sums from abroad, but also to the political agendas of numerous countries and international institutions that from the agreement legitimized by Iván Duque with the FARC have a superior interference in the Republic.

Thus, the recent parade of celebration of July 20, not only constitutes a vulgar histrionism about the true situation of diplomatic dependence of Colombia, but directly an explicit deception about the famished sovereignty of the territory before the dominance of foreign agents in the country .

Don’t be surprise – the same happened in South Africa as well.

The Open Society Foundations, the NGO system of billionaire George Soros, is pointed out behind the “color revolutions” in the former Soviet environment, in subversion against the Bolivarian revolution in Venezuela, and Soros himself has recognized his role in the Maidan Ukrainian.

Together with the Ford Foundation, with a long history of working with the CIA, the National Endownment for Democracy, Open Society and the Cuba Study Group screen financed the Encuentro de la Cultura Cubana magazine since the 1990s, this time to Cuba.

This May 26, Open Society Foundations hosted the Cuba Posible “ideas lab” at its New York headquarters. Quite similar to Encuentro… Cuba Posible, according to statements by its “director”, Roberto Veiga, promotes the “transitional change” and a “multiparty Cuba”. The New York event, organized by Cuba Posible with a think tank financed by the Ford Foundation and Open Society, dealt with “the current challenges of Cuba.”

Among the speakers of the event were Carlos Saladrigas, co-director of the Cuba Study Group, to which Fidel dedicated his phrase “How cheap the new Carlos Saladrigas wants to buy us!”, Arturo López Levy who asked Cuba to “moderate” its foreign policy to be accepted by the United States, Carmelo Mesa Lago, a cubanologist who recriminates Raul Castro because “he has not responded to Obama’s steps with any concession” and so we could continue until we meet three ambassadors in Havana giving opinions on issues that only concern the Cubans; a whole “creative pleiad” in the words of the “director” who looks at “the current challenges of Cuba” … with the support of George Soros and his Open Society Foundations.