Remember,  the Bible mentioned there was more than one “Flood” and those different waters were not all part of the water in the oceans after the flood.   A Massive Freshwater Sea is buried beneath the Atlantic Ocean.   Perhaps some other places as well. 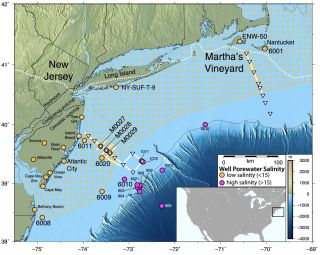 Giant underground ocean hidden in the middle of this Chinese desert

A gigantic freshwater aquifer is hiding under the salty Atlantic Ocean, just off the northeastern coast of the United States, a new study finds.

While the aquifer’s exact size is still a mystery, it may be the largest of its kind, taking up a region stretching from at least Massachusetts to southern New Jersey, or nearly 220 miles (350 kilometers). The area includes the coastlines of New York, Connecticut and Rhode Island. This aquifer may contain about 670 cubic miles (2,800 cubic kilometers) of slightly salty water (we’ll explain its slight saltiness later).   This water isn’t young, either. The researchers said they suspect that much of it is from the last ice age.

Scientists got the first hints that an aquifer was hanging out under the ocean in the 1970s, when companies drilling off the coast for oil sometimes hit freshwater instead. But it wasn’t clear whether these freshwater water deposits were isolated pockets or whether they covered a larger expanse.

About 20 years ago, study co-researcher Kerry Key, now a geophysicist at the Lamont-Doherty Earth Observatory at Columbia University in New York, began helping oil companies pinpoint oil hotspots by using electromagnetic imaging on the subseafloor. Much like an X-ray can image a person’s bones, electromagnetic imaging uses electromagnetic waves (from static to microwaves and other high frequencies) to detect objects hidden from view.

More recently, in an effort to find freshwater deposits, Key decided to see if tweaking this technology could help him find aquifers, which are underground pools of fresh water. So, in 2015 he and study co-researcher Rob Evans, a senior scientist of geology and geophysics at the Woods Hole Oceanographic Institution in Massachusetts, spent 10 days at sea, taking measurements off the coast of southern New Jersey and Martha’s Vineyard in Massachusetts. The researchers chose these spots because oil companies had reported finding fresh water there.

“We knew there was fresh water down there in isolated places, but we did not know the extent or geometry,” lead author Chloe Gustafson, a doctoral candidate of marine geology and geophysics at Lamont-Doherty Earth Observatory, said in a statement.

An analysis found that the fresh water wasn’t scattered here and there, but was instead continuous, starting at the shoreline and extending out on the continental shelf. In some places, the aquifer stretched as far as 75 miles (120 km) offshore.

The feature also ran deep, starting at about 600 feet (182 meters) below the ocean’s floor and ending at about 1,200 feet (365 m) below the seafloor. If later research shows that the aquifer is larger, it could rival the Ogallala Aquifer, a huge freshwater pool that supplies groundwater to eight Great Plains states, from South Dakota to Texas. [Dry and Dying: Images of Drought]

How did the water get under the ocean?

The aquifer likely came into being at the end of the last ice age, the researchers said. About 20,000 to 15,000 years ago, much of the world’s water was locked up in glaciers, making sea levels lower than they are now. As temperatures rose and the ice covering the U.S. Northeast melted, water washed away huge quantities of sediments, which formed river deltas on the still-exposed continental shelf. Large pockets of fresh water from the melted glaciers then got stuck in these sediment traps. Later, sea levels rose, trapping the sediment and fresh water under the ocean.

These days, it appears that the aquifer isn’t stagnant. Rather, it’s likely fed by subterranean runoff from the land, the researchers said. This water is then likely pumped seaward by the rising and falling pressure of the tides, Key said.

He added that the aquifer is freshest close to shore and gets saltier farther out, indicating that it slowly mixes with seawater over time. The freshwater near land is about 1-part-per-thousand salt, much like other terrestrial fresh water, he said. In contrast, by the aquifer’s outer edges, it’s about 15 parts per thousand, which is still lower than typical seawater’s level of 35 parts per thousand.

In other words, this water would have to be desalinated before people could use it, but it would still be cheaper to process than regular salt water, Key said.

“We probably don’t need to do that in this region, but if we can show there are large aquifers in other regions, that might potentially represent a resource” in dry places such as Southern California, Australia, the Mideast or Saharan Africa, he said in the statement.

The study was published online June 18 in the journal Scientific Reports.

Thousands of years ago, glaciers covered much of the planet. Oceans receded as water froze in massive sheets of ice blanketing the North American continent. As the ice age ended, glaciers melted. Massive river deltas flowed out across the continental shelf. The oceans rose, and fresh water was trapped in sediments below the waves. Discovered while drilling for oil offshore in the 1970s, scientists thought these “isolated” pockets of fresh water were a curiosity. They may instead prove to be a parched world’s newest source of fresh water.

As told in the latest issue of the peer-reviewed journal Scientific Reports, scientists from Columbia University and the Woods Hole Oceanographic Institution spent 10 days on a research ship towing electromagnetic sensors from New Jersey to Massachusetts. By measuring the way electromagnetic waves traveled through fresh and saline water, researchers mapped out fresh-water reservoirs for the first time.

It turns out the subterranean pools stretch for at least 50 miles off the US Atlantic coast, containing vast stores of low-salinity groundwater, about twice the volume of Lake Ontario. The deposits begin about 600 ft (183 m) below the seafloor and stretch for hundreds of miles. That rivals the size of even the largest terrestrial aquifers.

There is ample evidence of low-salinity submarine groundwater contained within the world’s continental shelves, with direct or indirect observations occurring on all continents.  (2013)   Several of these observations have taken place on the U.S. Atlantic coast.
https://www.nature.com/articles/s41598-019-44611-7#author-information

Below the Atlantic ocean there could be evidence that could forever shatter our long-held beliefs and at a certain place above the Arctic Circle, there exists an oceanic depression. Is there something and someone ancient under the surface of the Earth that is waiting to be discovered?
https://www.youtube.com/watch?v=WJF_ZaWe6O0

Could the legendary Aztlan be a missing link that connects the Annunaki with the post-deluge Atlantean migration and ancient American civilizations? Explore the origin and demise of the Aztecs that indicate greater forces battling behind the scenes, influencing human culture and beliefs.

The similarity found within the accounts of the ancient gods of the Aztec, Sumerian and Christian beliefs may suggest that these cultures were influenced by the same beings in the ancient world. As our panel of experts dig into the commonalities of these legends, we begin to see a clearer picture of the origins of the Aztec people and their belief of extraterrestrial beings as their gods, which may have enabled their eventual demise.

Aztlan Lost City of Atlantis Documentary 2019 Were the Azteca Atlanteans?

Gaia releases new videos every week What knowledge lies in our ancient past? A team of renowned scholars has come together to go beyond the surface-level myths, artifacts, and mysteries found in ancient texts and lost cities from around the world. Journey to decipher the code scattered throughout ancient civilizations.