5 June 2019 – The remaining members of the  “Krugersdorp Killers” were found guilty of 32 counts between them – including murder, fraud, racketeering, and robbery – by the Gauteng High Court in Johannesburg on Monday.   The group which called themselves Electus per Deus (Chosen by God) murdered 11 people between 2012 and 2016. 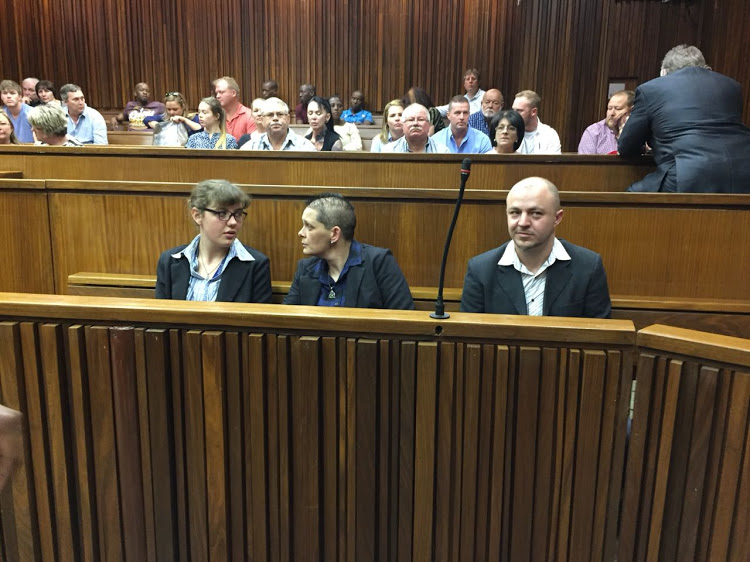 During the ongoing trial, Cecilia Steyn revealed that she has a tattoo of the South African Communist Party (SACP) badge. Explaining her political affiliations to the court, Steyn said:

“I have an SACP badge … I was a member of the SACP and the ANC Women’s League.”

Steyn has vehemently denied being a Satanist. Despite witness statements which point to Steyn believing she was the ‘Bride of Satan’ and a 42nd-generation witch, the accused has claimed to be a steadfast Christian.

Strangely, the OTC group’s religious mission was to convert Satanists to Christianity.

Marcel’s elder brother Le Roux Steyn was also a part of the group, but entered into a plea bargain with the State in May last year. He was found guilty of seven murders and sentenced to 35 years for each of them. Ten years of his sentence were suspended on condition that he testified at the trial.

Another member of the group, John Barnard, is serving 20 years after he was sentenced in 2016.

How it all started

The saga started in 2012 when Cecilia Steyn infiltrated a religious group called Overcomers Through Christ (OTC) under the guise of being in need of deliverance from Satanism.

Soon the relationship between Cecilia and the leader of OTC, Ria Grunewald, soured and Cecilia became less involved in OTC.

Along with the Valentines and Marinda, Electus per Deus was formed, and together they launched a series of attacks against members of OTC.

On July 2, 2012, they placed home-made bombs under the cars of people attending an OTC course, but were nearly spotted and fled before they could ignite the explosives.

Later that month, the group started a fire and damaged windows at the Lighthouse Christian Centre in Randburg.

A note written by Cecilia was placed on the gate of the centre, which said: “Ria, who is going to protect you now?”

In July and August, various threats were sent by SMS to OTC members and other people associated with Grunewald.

On July 11 that year, Cecilia and her accomplices successfully set off explosives near cars at an OTC meeting.

As Cecilia became more obsessed with executing revenge on Grunewald, she falsely accused Natacha Burger – an active member of OTC – of praying the so-called “danger prayer” that led to the death of various young children.

She then convinced the Valentines to kill Burger. So, on July 26, 2012, the Valentines entered the home of Joy Boonzaier, a close friend of Burger, and made her write a note asking Burger to come to her Wierdapark flat when she returned from work.

When Burger arrived, the Valentines stabbed her and Boonzaier to death.

The next victim was Reginald John Edwin Bendixon, a semi-retired pastor and a long-time friend of Grunewald. He occasionally presented lectures at OTC.

Grunewald regarded Bendixon as her mentor, and Cecilia, once again vengeful following the disintegration of her and Grunewald’s relationship, began planning to have him killed.

On August 13, 2012, Zak Valentine and Marinda Steyn, disguised as police officers, entered Bendixon’s home and attacked him with a hand axe. He died after being stabbed multiple times. Marinda Steyn would later, in court, describe her first murder as “exciting” and an “adrenaline rush”.

At this point, Mikeila Valentine had become disillusioned with the group’s activities and wanted out. Now a liability, her husband Zak and Cecilia decided to kill her.

Zak Valentine made sure he had an alibi by going to work on the day of the murder on October 4, 2012. Before leaving the house, he put some kind of tranquilliser in Mikeila’s coffee. He had given Marinda a set of house keys and a gate remote. That Thursday morning, Marinda and her daughter, Marcel, who was 14 at the time, killed Mikeila by smashing her skull with a blunt object and stabbing her several times as she lay on her bed. She was 25.

Cecilia then planned to have Ria’s son, Joshua Grunewald, murdered, but the three men she tasked with the killing never carried it out.

Running out of money

After being dormant for a while, Electus per Deus started running out of money. Zak Valentine had already contributed R2m of his own money, but had quit his job and started his own venture, borrowing money from his parents and in-laws.

The group believed that the money was needed for an orphanage run by Cecilia, though the orphanage never existed.

Cecilia then devised a scheme to obtain money through insurance fraud, theft and murder.

The group, believing they were committing these crimes for a “good cause”, participated in good faith.

Barnard, who was sentenced in 2016, set up a meeting between his employer, Peter Meyer, and members of the group, seemingly to discuss a “business venture”.

On November 27, 2015, Valentine, Marinda and Marcel arrived at Meyer’s home, tied him and his wife up and demanded money. The couple didn’t have much money on them and were subsequently stabbed to death.

Cecilia’s next scheme involved faking Zak Valentine’s death to get a life insurance payout of R3.57m.

They befriended a street vendor by the name of Jarod Jackson. On December 16, 2015, Jackson, together with Barnard, Marinda and Le Roux, left for the Free State in two cars – one being Valentine’s Mercedes-Benz SLK.

On the way, Le Roux drugged and then strangled Jackson. On the R57 between Reitz and Petrus Steyn, they parked Valentine’s SLK in a veldt, placed Jackson in the driver’s seat and set the car alight.

The following day, Marinda identified Jackson’s charred remains as the body of Valentine, thus obtaining a death certificate to secure the insurance payout. Cecilia was the main beneficiary.

Valentine then booked himself into the Herberg Hotel in Krugersdorp as Jacques de Villiers, using a fake ID. He hid here until April 2016, before moving to Kia Kaha Ministries in Krugersdorp, where he was arrested on June 26, 2016.

The group then embarked on a series of appointment murders. They would set up an appointment with an identified victim under false pretexts. Marinda, Le Roux and Barnard would typically intimidate the victims into handing over their bank cards. Marcel would then go to a nearby ATM and verify that the PIN was correct. Once confirmed, the victims would be murdered.

The first victim was Glen McGregor, 57, a tax consultant from Randfontein. Marinda, Marcel, Le Roux and Barnard met McGregor at his home on January 27, 2016, shot him and forced him to transfer R6 000 into Marinda’s account. He died from gunshot wounds.

Anthony Scolefield, 67, a tax consultant, was the group’s next victim. The foursome lured Scolefield to their flat in Krugersdorp and forced him at gunpoint to hand over his bank cards and PINs. They withdrew R16 600 from his accounts and used his cards at various shops in Krugersdorp.

Scolefield was eventually strangled and placed in the boot of his car, which was then abandoned.

Similarly, Kevin McAlpine, 29, was lured to their Krugersdorp flat on May 26, 2016, and forced to hand over his bank cards. R1 300 was withdrawn from his accounts. He, too, was strangled and left in the boot of his car.

A few days later, on May 30, estate agent Hanle Lategan, 52 was lured to the flat under the pretence of a business meeting with a client.

She was similarly threatened and R3 000 was withdrawn from her account. Police had cordoned off the area where Lategan had parked her car as she had been reported missing. The foursome then placed Lategan’s body in Marinda’s car and dumped her body near the Randfontein cemetery, where it was discovered the following day.

Pre-sentencing for the last three convicted members of Electus per Deus will take place on August 12.

Cecilia Steyn was a leader of a cult church and had a collection of knives‚ the South Gauteng High Court heard in testimony from witnesses on Tuesday.

Steyn‚ 37‚ Zak Valentine‚ 33‚ and Marcel Steyn‚ 20‚ are accused of involvement in the murders of 11 people from 2012 to 2016‚ as well as robbery‚ aggravated assault‚ racketeering‚ possession of an unlicensed firearm‚ fraud and identity theft. They have pleaded not guilty.

Marcel’s mother‚ former high school teacher Marinda Steyn‚ 51‚ (no relation to Cecilia) was previously sentenced to multiple life terms for her involvement in the murder spree‚ dubbed the Krugersdorp murders. Marcel’s brother Le Roux is also serving a 25-year jail term and has testified against the three remaining accused as a state witness.

Cecilia Steyn’s former friend‚ who cannot be named‚ on Tuesday told the court: “She had a passion for knives. I gave her knives for her birthday.”

She said she had given Cecilia about three knives in total.

The murders are believed to have started when Cecilia‚ a self-proclaimed child psychologist‚ had a fall-out with the pastor of the Overcomers Through Christ church.

Another witness‚ Karin Luitingh‚ 65‚ told the court that Cecilia had assessed whether she had demons after she was baptised when she joined the Overcomers group.

“After I was baptised‚ she looked at me and said I was clean‚” Luitingh said.

She said Cecilia could tell a person was clean by seeing a light above their head.

During one of their gatherings‚ Luitingh said her car was bombed. They were inside a house when they heard sounds of “gunshots or bombs”.

“I did not immediately go out. I did when I was told that my car was one of those that were bombed.”

She told the court that she received threatening text messages from an unknown person after a member of the group was murdered.

2012:July 26: Natacha Burger‚ 33‚ and her neighbour Joyce Boonzaaier‚ 68‚ had their throats slit in Centurion. The bodies were found in Boonzaaier’s home.

August 14: Pastor Reginald Bendixen‚ 75‚ was stabbed and hacked to death at his home in Honeydew.October 11: Mikeila Valentine‚ 25‚ was stabbed to death in the home she shared with her husband‚ Zak.

2015: November 27: Peter Meyer‚ 51‚ and his wife Joan‚ 47‚ were stabbed to death at their home in Rudd Street‚ Noordheuwel.December 6: Jarrod Jackson‚ 44‚ was burnt to death in a car in Petrus Steyn in the Free State.

2016: January 27: Glen McGregor‚ 57‚ was shot on his smallholding in Randfontein.May 10: Anthony Scholefield‚ 64‚ was strangled to death.

His body was found in the boot of his car‚ which was abandoned on Premier Street in Krugersdorp. His belongings were stolen and R9‚600 was withdrawn from his bank account.

May 26: The body of Kevin McAlpine‚ 29‚ was found in the boot of his car on the corner of Sivewright and Francis streets in Krugersdorp.

He was robbed of his wedding ring‚ laptop‚ shoes‚ watch and R1‚300 in cash.

He had been married to 26-year-old Kezia for a year and she was six months pregnant.

May 31: The body of Hanle Lategan‚ 52‚ was discovered in the veld along the Randfontein River on a farm in Elandsvlei. Her cell phone‚ gold and diamond ring‚ watch and R3‚000 in cash were stolen.

Her car was found in front of the Krugersdorp Private Hospital.

Guilty as charged – in what the judge called a religious scam, manipulation and deadly deceit convinced a Krugersdorp mother and her teenaged children they were killing for God. In a Carte Blanche exclusive we meet the investigating officer who cracked the case of the notorious Krugersdorp Killers. Together with the seasoned detective we revisit the crime scenes, examine the forensics and find out how he secured the six convictions that were handed down by Judge Francis in the Gauteng High Court this week. In a television first, we also bring you never-before-seen footage of the arrests, and finally speak to victims’ families who have waited more than three years for justice.