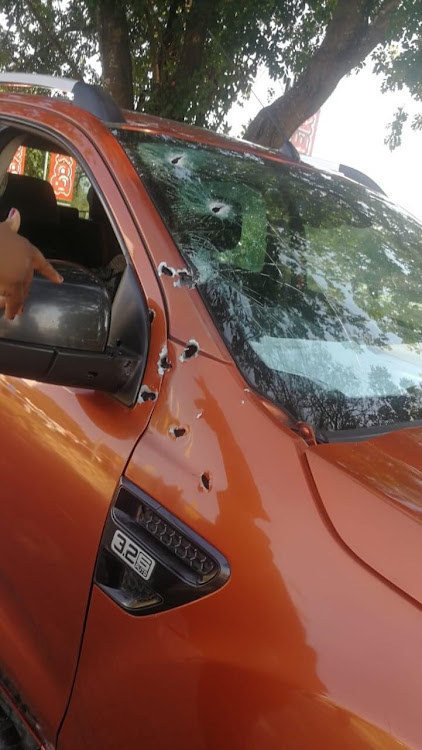 Alleged rhino poaching kingpin Sydney Petros Mabuza was gunned down in Hazyview, Mpumalanga, on Thursday afternoon.     His car, a Ford Ranger, was found riddled with 17 bullet holes.    Mabuza, who was known as Mshengu and Mr Big in the community, was facing a number of charges, including rhino poaching and murder.    He was out on R200,000 bail for rhino poaching following his arrest in eMalahleni in 2019.

Hawks spokesperson in the Province Cpt Dineo Sekgotodi Said as the hawks dealing with cases of Mabuza they have come to know that he was shot dead on Thursday but that will not hinder their investigation as they have other suspects on the cases.

“We have got the news that one of the suspects in the rhino horn cases have been killed. But as we speak he was facing charges along other accused which means our investigation will not stop. There are other cases we are investigating around that and if his Murder was part of his crew hiding information we will know as the investigation progresses,” Said Sekgotodi.  In the case of the murder charge Mabuza faced, he and another three people allegedly conspired to murder a man who owed him money and then dumped his body in a river in Bushbuckridge.

2018 – A heavily armed task force has been involved in a massive crackdown that has seen the arrest of notorious alleged poachers.

Mabuza has Mpumalanga province police officers on his payroll, stretching from Kruger National Park to Hazyview, onto White River and Nelspruit. The 70 men from the Hawks tactical unit chosen for the operation were not local. A little help from a helicopter and a hunch from a master of intelligence, and the Hawks quickly closed in on Mabuza at one of his lesser known mansions.

Ten days later, on 16 July 2018, in blur of unrecorded events, Acting High Court Judge Semenya and Assisting Acting High Court Judge Nemorati, granted Mabuza bail of R250 000 – that’s R30 000 less than what he paid for two rhino horns on the day of his 12 June arrest. He spends more than that on one night of debauchery at his mansion parties where women dance naked on the tables, and class A drugs are served like canapés.

According to an employee of a Mpumalanga security company, “They throw huge parties and block off the streets. I was only once able to drive pass Mabuza’s primary residence, the gate was open and I saw a man with an automatic machine gun. But if we report anything to Hazyview police, they ignore it.”

I was so livid that day bail was granted that I left a message for Mabuza on Saving the Wild’s social media page, knowing the bad guys all follow us.

This is a message for Mabuza…Mshengu…Shabalala…Mr Big…or whatever they call you. Tonight rhino poachers are drunk and high celebrating on the streets of Hazyview. At your home they sing victory songs. Last week while you were sitting in a jail cell, I was walking “your” streets, talking to your friends, making friends with your enemies. I know what you did. And soon the world will too. And all these crooked cops that fall at your feet, their days are numbered. You’re nothing but a thug.

They next day I published Rhino Mafia: Is Hazyview under siege? I linked six rhino horns found next to Mabuza’s primary residence to poached rhinos in Kruger. This was only possible because of the critically important work of RhODIS – the Rhino DNA Indexing System. But those days of forensics excellence are over, ever since the South African government mysteriously decided not to renew the contract more than a year ago. It’s one of many never ending roadblocks that have been put in place to make us fail, weakening our defence against rhino poachers in court.

According to The Boucher Legacy, a major funder of RhODIS, “The key concern around this halting of evidence supply is that it must be impacting on the success of prosecutions of poachers. Even more disturbing is that RhODIS is more than willing to process the DNA, and the DNA is legally allowed to be sent to them for processing.”

The Achilles heel of rhino poaching is court corruption – as recounted in the Rhino mafia court battles story published earlier this week. In this article I explained how Mabuza got bail for a second time when he was arrested for rhino related crimes in September 2018, just three months after his first arrest. After threats and assaults by Mabuza henchmen, Hawks Lt Colonel Leroy Bruwer had testified in court in the second bail application that he feared for his life on a daily basis.


Is South Africa a Mafia State?