In South Africa, a rhino is killed for its horn every 22 hours.   One of the reasons why the Princess Charlene of Monaco and Thanda Foundation Trust have decided to dehorn these animals as part of their conservation work with the “Project Rhino”. In doing so, they hope to protect this threatened species for generations to come.

For one year, our cameras followed the Prince in his daily head of state and family. Twelve key moments of a year of reign behind the scenes of princely palaces and abroad. His personal office atop one of the towers of the palace (rarely filmed) to the most private rooms where he always meets with the family, sports events in charitable prestigious galas, political obligations very personal passion, Monaco or abroad, the ruler of Monaco sharing for the first time his public and private life.    A topic not to be missed, in which man is surrounded by his top aides, his wife and his whole family to reveal its personality and intimate answer the questions related to his reign.

As explained by the Princess of Monaco, there will always be people in the world who take what is not theirs.  But as long as there are people who try to stop them, our rhinos and wildlife have a future.   This passion for protecting our wildlife is precisely why the Princess Charlene of Monaco Foundation started the #chasingzero initiative. The main messages the Foundation wants to get across are that they are chasing zero regarding wildlife poaching, and that rhino horn is not cool!

During her recent visit to South Africa, HSH Princess Charlene was involved with various conservation operations such as rhino monitoring and tracking, deployment with the Anti-Poaching Unit, educational wildlife photography sessions, and a White Rhino dart and dehorning exercise.

The Foundation wants to do all it can to protect the rhinos and other endangered species. Since the rhino poaching crisis began in 2008, thousands of African rhinos have been killed for their horn. Poaching numbers have decreased since 2015, but a rhino is still killed for its horn every 22 hours in South Africa! In total, nearly 10 000 rhinos have been killed. Other African countries affected by rhino poaching include Kenya, Zimbabwe, and Namibia.

It is a concern.    South Africa’s rhino populations have fallen quite drastically. About the Princess Charlene of Monaco Foundation South Africa

Sport has the power to inspire young people and transform lives. This central idea prompted Princess Charlene of Monaco to launch a foundation that would work to end death and disease caused by water fatalities. The Foundation focuses on the fact that drowning is a preventable epidemic that predominantly affects children and youth. In the six years since its inception, the Princess Charlene of Monaco Foundation has established 149 projects in 33 countries, reaching nearly half a million people, mostly children.

These programmes raise awareness about the crucial issue of water safety and teach people to swim. The Foundation also uses the transformative power of sport’s positive values by giving children access to various sporting disciplines. Its Sport and Education initiatives include providing financial support to talented athletes who lack the funds to realise their dreams.

In South Africa, the Foundation has implemented projects in Cape Town, KwaZulu-Natal, and Gauteng. These projects reach out to underprivileged youth and teach them how to enjoy the benefits of sport in a safe and controlled manner. Thus far, the Foundation has worked with thousands of South African youths. Through the efforts of the SA chapter of the Foundation, many more young lives will benefit. The Foundation’s valuable work also extends to children from disabled communities, who are often marginalised and neglected.

It was stated in May 2021, that during the past 10 years, poachers have relentlessly killed these rhinos, and they have not had time to recover.    As part of the mission to combat poaching, the princess was on the ground while rangers darted rhinos from a helicopter and dehorned them — a measure which reduces the risk they’ll be targeted.   In a series of pictures released by the Princess Charlene of Monaco Foundation SA, the princess can be seen apparently comforting rhinos during the dehorning process. 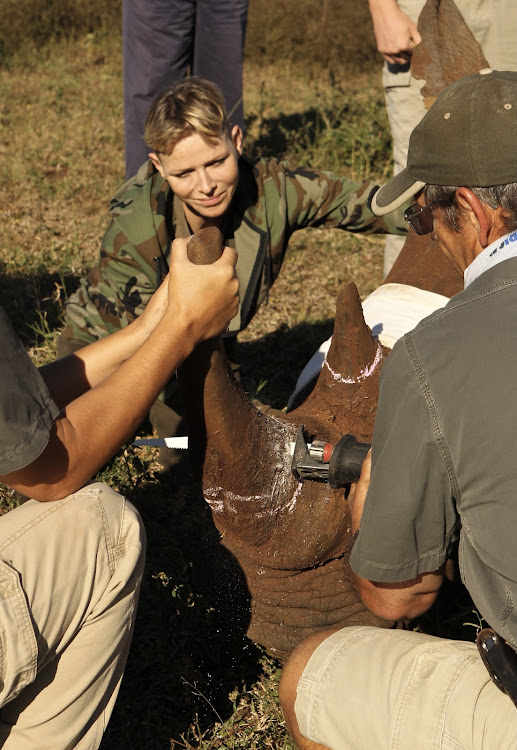 Thus, the palace confided a few days ago, via press release:

Princess Charlene of Monaco had to undergo several complicated surgeries after contracting a serious ear, nose and throat infection in May. The most recent operation only took place yesterday, after complications arose during her first operation in May. The princess’s medical team asked her not to make the trip to Monaco as the princess still has to undergo further procedures and recover.

Princess Charlene of Monaco is therefore hospitalized in South Africa … thousands of kilometers from her husband and children. A terrible ordeal for the young mother, especially since she celebrates, this Thursday July 1, 2021, her tenth wedding anniversary with Prince Albert II.

While she should probably undergo a new operation in the days or weeks to come, Princess Charlene of Monaco will soon be reunited with Prince Albert II and their twins. Indeed, after a short reunion at the beginning of June, the prince and his children are preparing to go once again to the princess’s bedside.

The Luxury Life Of Monte

The Prince Of Monaco’s Kitchen