In the resolution A/RES/70/175, the General Assembly decided to extend the scope of Nelson Mandela International Day, observed each year on 18 July, to be also utilized in order to promote humane conditions of imprisonment; to raise awareness about prisoners being a continuous part of society; to value the work of prison staff as a social service of particular importance.

New York, 7 October 2015: The revision of the Standard Minimum Rules for the Treatment of Prisoners (SMRs) was followed with great attention and commitment by Member States, international and regional organizations as well as civil society, indicating the undisputed standing of the SMRs as the core international minimum standards applicable to the treatment of prisoners. After an intergovernmental review process which span close to five years, consensus was achieved on all rules opened for revision. The revised “UN Standard Minimum Rules for the Treatment of Prisoners”, were recommended to be known as “the Nelson Mandela Rules” in order to honour the legacy of the late President of South Africa, Nelson Rolihlahla Mandela. As the custodian of the Nelson Mandela Rules, UNODC, together with the Government of South Africa, which hosted the final meeting of the intergovernmental Expert Group, jointly convened a high-level presentation of the Nelson Mandela Rules in New York on 7 October 2015. The event consisted of (i) a high-level segment to celebrate the immanent adoption of the revised rules; and (ii) a technical segment shedding light on the revisions made in the various thematic areas. The UN General Assembly subsequently proceeded with the formal adopted of the Nelson Mandela Rules on 17 December 2015 (A/RES/70/175). Scientific Consultations – CURRENT SCIENCE IN PSYCHOLOGICAL TREATMENT INTERVENTIONS – 09.12.2015

The Security Council, which has five permanent members — China, France, Russia, the United Kingdom, and the United States — is responsible for responding to world crises and maintaining peace through cease-fire orders, collective military action, sanctions, and peacekeeping operations. It is the only U.N. body with the authority to take legal action. Brazil, Germany, India, and Japan have advocated time and again for permanent seats, bids that have been repeatedly vetoed by the general assembly.
https://foreignpolicy.com/2015/10/15/meet-the-five-newest-members-of-the-u-n-security-council/

A/RES/70/175 not only adopted the revised United Nations Standard Minimum Rules for the Treatment of Prisoners, but also approved that they should be known as the “Nelson Mandela Rules” in order to honour the legacy of the late President of South Africa, who spent 27 years in prison in the course of his struggle referred to above.

6. Approves the recommendation of the Expert Group that the Rules should be known as “the Nelson Mandela Rules”, to honour the legacy of the late President of South Africa, Nelson Rolihlahla Mandela, who spent 27 years in prison in the course of his struggle for global human rights, equality, democracy and the promotion of a culture of peace;

7. Decides to extend the scope of Nelson Mandela International Day, observed each year on 18 July, 27 to be also utilized in order to promote humane conditions of imprisonment, to raise awareness about prisoners being a continuous part of society and to value the work of prison staff as a social service of particular importance, and to this end invites Member States, regional organizations and organizations of the United Nations system to celebrate this occasion in an appropriate manner;

9. Encourages Member States to endeavour to improve conditions in detention, consistent with the Nelson Mandela Rules and all other relevant and applicable United Nations standards and norms in crime prevention and criminal justice, to continue exchanging good practices in order to identify challenges faced in implementing the Rules and to share their experiences in dealing with those challenges;

10. Invites the Commission on Crime Prevention and Criminal Justice to consider, at its upcoming sessions, reconvening the open-ended intergovernmental Expert Group on the Standard Minimum Rules for the Treatment of Prisoners for the purpose of identifying the lessons learned, the means to continue to exchange good practices and the challenges faced in the implementation of the Nelson Mandela Rules;

I. Rules of general application

All prisoners shall be treated with the respect due to their inherent dignity and value as human beings. No prisoner shall be subjected to, and all prisoners shall be protected from, torture and other cruel, inhuman or degrading treatment or punishment, for which no circumstances whatsoever may be invoked as a justification. The safety and security of prisoners, staff, service providers and visitors shall be ensured at all times.

Without prejudice to the provisions of article 9 of the International Covenant
on Civil and Political Rights,29 persons arrested or imprisoned without charge shall
be accorded the same protection as that accorded under part I and part II, section C,
of these rules. Relevant provisions of part II, section A, of these rules shall likewise
be applicable where their application may be conducive to the benefit of this special
group of persons in custody, provided that no measures shall be taken implying that
re-education or rehabilitation is in any way appropriate to persons not convicted of
any criminal offence.

Standard Minimum Rules for the Treatment of Prisoners

Adopted by the First United Nations Congress on the Prevention of Crime and the Treatment of Offenders, held at Geneva in 1955, and approved by the Economic and Social Council by its resolutions 663 C (XXIV) of 31 July 1957 and 2076 (LXII) of 13 May 1977 .
Basic principle
6. (1) The following rules shall be applied impartially. There shall be no discrimination on grounds of race, colour, sex, language, religion, political or other opinion, national or social origin, property, birth or other status. 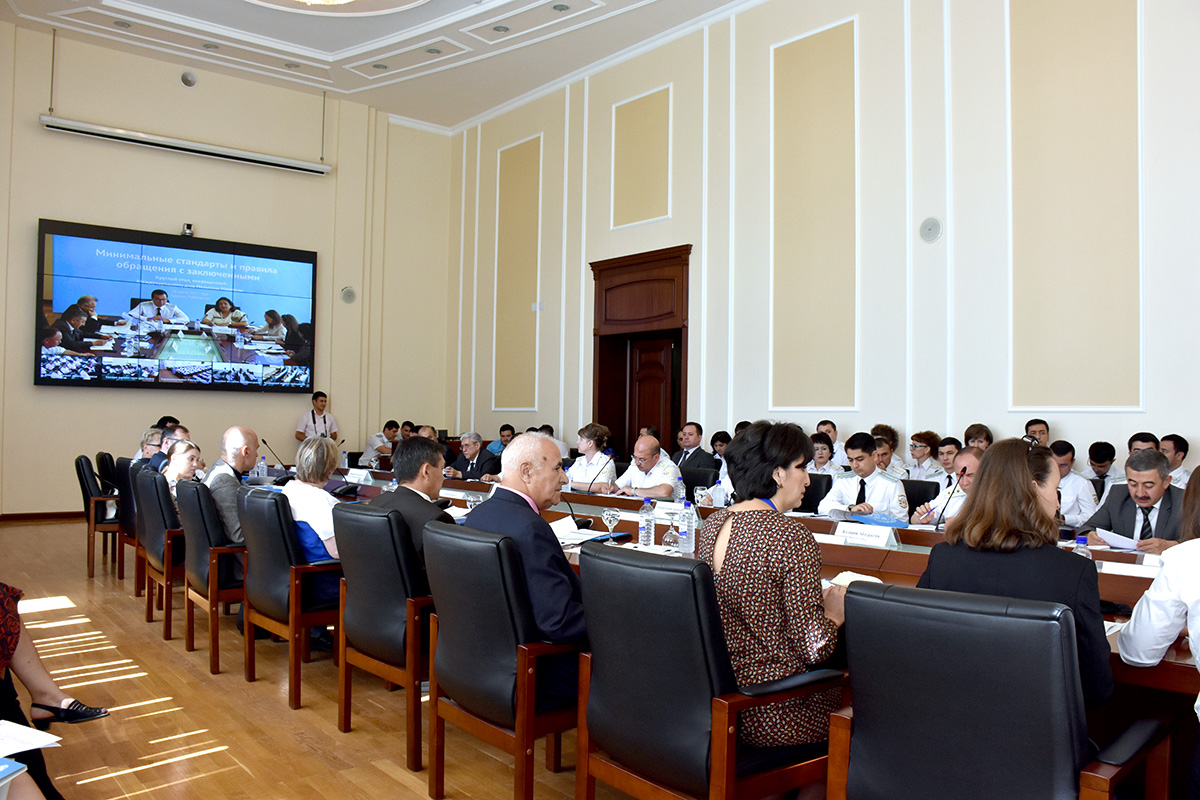 With the memory of Nelson Mandela in mind, who himself spent 27 years of his life in prison, the General Assembly adopted the United Nations Standard Minimum Rules for the Treatment of Prisoners in December 2015 as ‘ the Nelson Mandela Rules’. The rules resulted from five years of inter-governmental consultations, and represent a landmark harmonization of the original version (1955) with international law and good prison management practices.

On 28 July 2017 General Prosecutor’s Office of Uzbekistan in partnership with UNODC Regional Office in Central Asia conducted the roundtable on implementation of the UN Minimum Standard Rules for the Treatment of Prisoners to promote humane conditions of imprisonment and to value the work of prison staff. The event gathered 70 participants from Tashkent and more than 100 participants from five regions of Uzbekistan through the video conferencing.  Discussion focused specifically on reduction of the scope of imprisonment,  prison conditions, rehabilitation programmes in prisons and post-release services aimed to ensure, as much as possible, that prisoners are willing and able to lead law-abiding lives upon release.

Representatives of the General Prosecutor’s Office, National Centre on Human Rights and Ombudsman’s Office reiterated Uzbekistan commitment in applying the Mandela Rules, implementation of penal reform, revision of relevant legislation, procedures, policies and practices in line with the Rules. Participants agreed that the revised Nelson Mandela Rules  provide the significant momentum to work together to preserve human dignity in prisons, thereby making a real difference for prisoners, prison staff and society at large.