On 27 April 2016 it was reported in the media that a solar energy park near Citrusdal in the Western Cape has been completed.   The 82.5MW Paleisheuwel photovoltaic park has been built by the South African subsidiary of Italian renewables and energy efficiency company TerniEnergia. 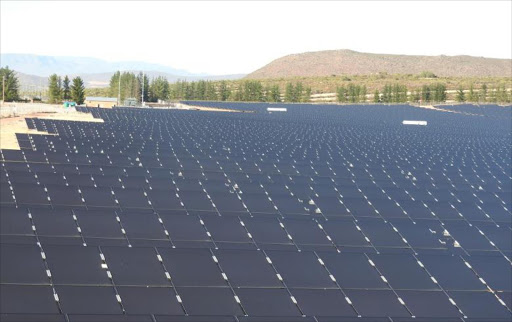 They stated that once the plant reaches optimal operation it will be able to generate a further 153GWh per year‚ enough to power 48‚000 households.

The company is also building the Tom Burke solar PV plant in Limpopo‚ with an installed capacity of 66MW and the ability to add 122GWh a year once fully up and running. This will meet the energy needs of 38‚000 homes.

The two parks are among the projects for which the Italian utility Enel Green Power secured power supply contracts in the third phase of the government’s renewable energy independent power producer procurement programme in October 2013.

Employing 611‚000 panels‚ the Paleisheuwel installation has been connected to the Eskom grid. TerniEnergia has a renewable four-year contract for the operation and maintenance of the plant.

Less than 100km north of South Africa’s juggernaut coal power station Medupi, a solar farm has been feeding its energy into the grid for the past year, showing that coal is not necessarily the king of the Waterberg.

Italian energy group Enel’s Tom Burke plant, near Lephalale, has just been classified as a national key point due to its importance to Limpopo’s national grid. The plant, situated on 202 hectares of land, received the status due to the important strategic role it plays by delivering energy to the national grid and supplying electricity to nine villages in the Lephalale region of Limpopo.

William Price, Head of Enel Green Power South Africa said the 66MW plant is a tribute to the success of renewable power in South Africa, and how it can empower local communities.

Tom Burke’s success comes amid the announcement by  Energy Minister Mmamoloko Kubayi three weeks ago that Independent Power Producers (IPP) would have to renegotiate their previously-agreed tariffs down to 77c per kilowatt-hour, if they wanted Eskom to sign power purchase agreements with them.

Eskom had previously refused to sign the power purchase agreements with the bidders of the last windows, but Kubayi said a deal had been struck and the agreements would be signed before the end of October, if the IPP’s consented to the 77c deal.

Enel is one of the independent producers that are currently scrutinising the deal. Price said that five of its projects have been affected by the delays in the last windows.

Enel first entered South Africa in 2014 and the company already has a significant footprint in the local market, with more than 520 MW of wind and solar projects in operation. It plans to invest R20bn into South Africa through renewable energy.

The Tom Burke photovoltaic solar plant is Enel’s first large scale solar project, with an installed capacity of 66MW. The plant signed a 20-year power supply agreement with Eskom, as part of the Renewable Energy Independent Power Producer Procurement Programme (REIPPPP). It was awarded the project in the third bid window at a tariff rate of 95c per KWh.

Tom Burke can generate up to 122 GWh per year, equivalent to the annual consumption needs of around 38 000 South African households, while avoiding the emission of over 111 000 tonnes of CO2 into the atmosphere each year.

Price was impressed by the performance of the plant so far, more than a year into its operation.

“A combination of factors including good research, solar radiation, a magnificent location and newer technology all contribute to its success,” he said.

Enel started construction of its Tom Burke plant in March 2015 and the plant was commissioned last year June. It started operations in August 2016.

The Italian multinational currently owns and operates five PV plants in South Africa.  Paleisheuwel (82.5MW)  is situated in the Western Cape, Tom Burke (66MW) in Limpopo, Upington (10MW) and Adams (82.5MW) in the Northern Cape, and Pulida (82.5MW) in the Free State province.

It also operates the 88 MW Nojoli and the 111 MW Gibson Bay wind farms in the Eastern Cape.

“Worldwide, we are one of the main renewable operators with an annual production of about 82 TWh**, produced mainly from water, sun, wind and heat from the earth.”