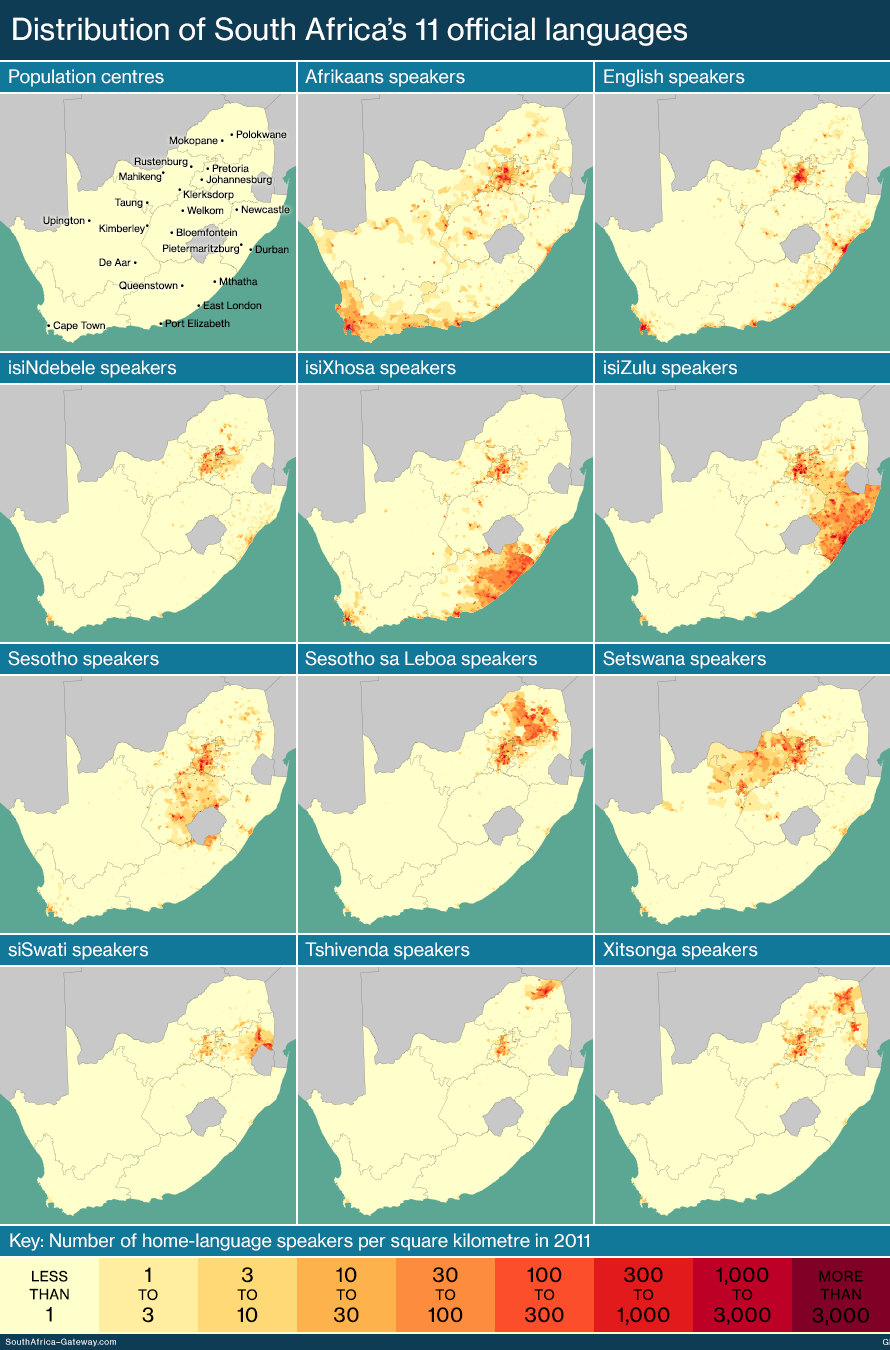 English is an urban language of public life, widely used in the media, business and government. Out of the 4.9-million South Africans who speak English as a first language, a third (33%) are white, a quarter (24%) are black, 22% are Indian and 19% are coloured South Africans. English is widely used as a second language and common language of communication, mainly in the cities.

Afrikaans is a version of Dutch that evolved out of a South Holland dialect brought here in the 1600s. Over the centuries it has picked up many influences from African languages, as well as from European colonial languages such as English, French and German. More than half (50.2%) of Afrikaans speakers are coloured, 40% are white, 9% black and just 1% Indian.

South Africa’s nine African official languages all fall into the Southern Bantu-Makua subfamily, part of the broad and branching Niger-Congo family of languages. The languages arrived here during the great expansion of Bantu-speaking people from West Africa eastwards and southwards into the rest of the continent. The expansion began in around 3000 BCE and was largely complete by 1000 CE.

Like all languages in the Niger-Congo family they are tonal languages, in which either a high or low tone gives a word a different meaning.

The nine African languages can be broadly divided in two:

Within the first group Xitsonga alone falls into the Tswa-Ronga subfamily, while isiZulu, isiXhosa, isNdebele and siSwati are Nguni languages.

Similarly, Sesotho, Sesotho sa Leboa and Setswana are closely related Sotho languages, and Tshivenda something of a standalone in the Sotho-Makua-Venda subfamily.

South Africans are more than bilingual. A rough estimate based on Census 2001 first-language data and a 2002 study of second-languages speakers is that the average South African – man, woman and child – uses 2.84 languages. Obviously, many people are limited to one, and many others able to speak three, four or more languages.

English- and Afrikaans-speaking people (mostly coloured, Indian and white South Africans) tend not to have much ability in African languages, but are fairly fluent in each other’s language. Multilingualism is common among black South Africans.

For this reason, South African censuses ask people which two languages they speak. The question in the 2011 Census was:

Which two languages does (member of household) speak most often in this household?

Thirteen options were given: South Africa’s 11 official languages, plus Sign Language, and “Other”. If a person did not speak a second language, that too was recorded.

The second map reveals a couple of things. The first is how few South Africans speak just one language. The second is that while English is the dominant first language only in the cities – Johannesburg, Cape Town, Durban – it is widely used as a second language across the country. English is spread by the media and used as a common language of communication.

But many South Africans are compelled to learn English, and often Afrikaans as well, simply to get a job and to work. These are often poorer people denied an adequate education. Elsewhere in the world the ability to speak many languages is a sign of sophistication. In South Africa, multilingualism – a complex undertaking, especially in languages from very different families – is a common achievement of the poor.

Language is fluid, especially in South Africa. Our languages are and have been for centuries in a constant swirl, mixed by work, migration, education, urbanisation, the places we live, friendship and marriage.

Because of this, South Africans are a code-switching people. “Code switching” simply means using more than one language in a single conversation. Every adult South African does this at some time, even if they aren’t aware of it.

Here’s an example overheard at a football match. IsiZulu is in regular type, Afrikaans in bold and English in italics:

“Chiefs [the football club] have won because the referee favoured them. Otherwise, they would have lost.
But why is this system of injury time not stopped?” 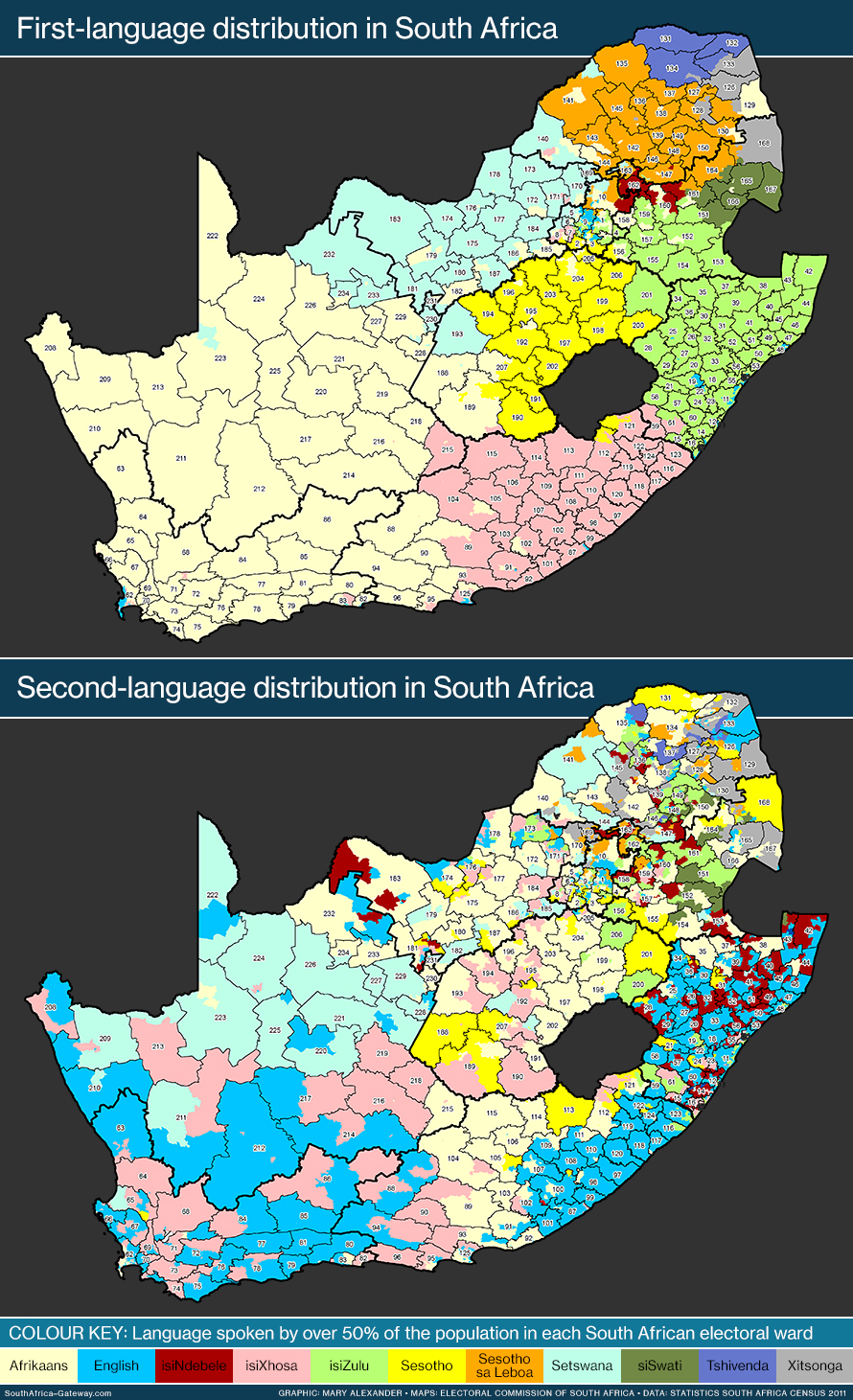 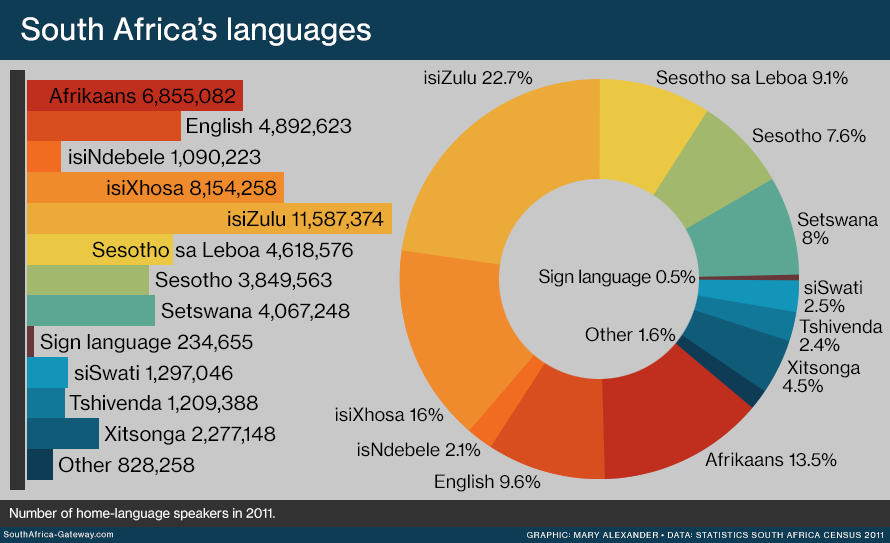 The 11 languages of South Africa