<
I TOLD YOU SO – GET RID OF FARMERS WHAT HAPPENED NEXT?  – ZIMBABWE IS NOT THE ONLY PLACE – MINING WILL NOT BRING ANY FOOD ON THE TABLE, BUT ONLY INCOME TO ELITES – ONLY FARMERS CAN BRING FOOD ON THE TABLE.   SOUTH AFRICA ON ITS WAY … 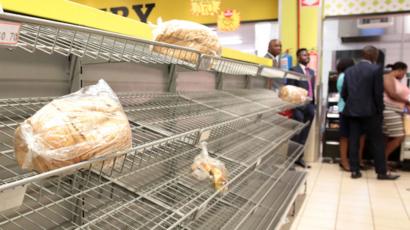 The World Food Programme (WFP) is rapidly expanding an already sizeable emergency operation in Zimbabwe where drought, flooding and macro-economic meltdown have plunged 7.7 million people – half the population – into severe hunger.

Funds are required immediately if WFP is to meet the growing needs of the hardest-hit Zimbabweans. It plans to more than double the number of people it is helping by January to 4.1 million, providing life-saving rations of cereal, pulses and vegetable oil and a protective nutrition ration for children under 5 years of age.

“We’re deep into a vicious cycle of sky-rocketing malnutrition that’s hitting women and children hardest and will be tough to break,” said WFP Executive Director David Beasley. “With poor rains forecast yet again in the run-up to the main harvest in April, the scale of hunger in the country is going to get worse before it gets better.”

Zimbabwe’s hunger crisis – the worst for more than a decade – is part of an unprecedented climate-driven disaster gripping southern Africa. Temperatures in the region are rising at more than twice the average global rate and ever more erratic rainy seasons are hitting the country’s subsistence farmers hard.

WFP’s planned scale-up is a huge logistical undertaking, with the limited availability of Zimbabwean dollars and surging prices for basics presaging a near wholesale switch from cash assistance to food distributions.

It envisages the sourcing, purchase and delivery to the land-locked country of more than 240,000 metric tons of commodities through June, a challenge all the more daunting because drought and flooding have eroded food supplies across much of Africa.

An estimated US$293 million is required for WFP’s emergency response with less than 30 percent of that sum secured.

“We must not let our immediate focus on emergency aid distract us from investing in the resilience programs that will help chronically hungry people cope with the ever-more severe impacts of erratic weather,” Beasley said. “We urge the international community to step up funding to address the root causes of long-term hunger in Zimbabwe.”

A  black citizen wrote the following

Here we go South Africa. With my experience I will share this, and read it and sleep over it. I guess it will change your mind set in a ballot box.

I say South African will completely fall down to its knees because I see ANC walking down the same path as Zanu PF of Zimbabwe calling itself revolutionary part. Here are the path you should see.

Mugabe; “Zimbabwe will never be a colony again, the whites want Zimbabwe back”
ANC has the same propaganda as Mugabe. Where is Ian Smith or Rhadesia since 1980?
Zimbabwe had Sandura commission in the 1980s and so its Zondo commission.

The crime rate went high.
Here is how its started with Zimbabwe, and South Africa missed that recipe because of Mandela and other leaders, THANK YOU.

Mugabe started killing his own brothers calling the dissidents and telling them to go back to South Africa because they are Zuku and Xhosa descendants. He created tribalism to its highest level so he can become God of Zimbabwe. He made sure that Shonas get all the best education and free move where ever, just like an in house ill treatment to children born outside of marriage by another man or woman.(abaza bezelwe ngubaba or mama) The brutality went on until today and some Ndebele people went back to South Africa.

( Thus the only thing I did not see in South Africa)

During that carrot and stick rule by Mugabe, the commission and courts went on and on just like in South Africa today.

Our ancestors including ANC survived without Bushiris and why now?

After the killing of Ndbeles, continued corruption and dead police conduct, just, just OMG like South Africa Zimbabwe is DEAD.

Zimbabwe cities were so beautiful and glowing and all that Ian Smith left is Now Zimbabwean ruins.

The high ways are now dust roads and some are small rivers.

How can you give a war veteran without a spoon a farm to use…. no training, no money and only the Bush brains that were not cancelled? What do you think will happen to that farm?

How can you rule a country with ideology to divide people or destroy other tribes?

The Zimbabwean government started to kill white farmers after seeing a drop of support from war vets and began telling people to occupy farms without and rules or policies, and this is happening in South Africa.

Malema said it. South Africa must do things on the table, black and white (I mean pen and paper)

Never be told of race again. Gone are the days South Africa.

The world has changed, the royal of all royals has different blood now. Apartheid will never come back, so it’s the white man. The whites you see in South Africa are not whites but just the skin.

There are racist as much as we have black racist.

Mugabe was a true racist because he openly said whites must go.

Mugabe was an open tribalist because he openly said Ndebeles must go. So who is right and who is wrong. South Africa I am Mthwakazi because I do not want shit that was done by Mugabe.

Here is what I predicted the last 10 years.

South africa will have 100 parties and will have ANC fighting corruption with corruption and it will be I cycles until everything falls.

KwaBulawayo the city of Kings, the Ndebele city was producing it’s own electricity and Mugabe destroyed it. ZESA ( Zimbabwe Electricity Authority) took over and destroyed other production, so , its Eskom.

In Zimbabwe there’s no load shedding; they do not have electricity PERIOD.

You can not be talking about category 12 at this century.

South Africa is still having that drop and please let’s not let that drop dry.

Zimbabwe has no railway line working.

Zimbabwe has no passenger transport working.

Zimbabwe has no meat producers working

Zimbabwe has no agriculture working except the hard workers that are still there , but they are dying of stress.

Zimbabwe has no money, has no currency and ask yourselves how it is trading with South Africa.

Shonas are now fighting among themselves, and they are flooding South Africa all over with corrupt games.

ANC wasted tax payers money in memorial of a skier Mugabe and all South Africans kept quiet about it because it’s a black man’s party.

Wake up South Africa, never pick up dirty games from west Africa and bring the to South Africa.

Nigerians are the worst corrupt idiots in the world, but you still still give them heavens.

How built Australia and why Nistralia. Who sponsors EFF?

The next 5-10 years South Africa will be on its knees.

South Africans will be all over Africa trying to make ends meat. The other world will have its doors shut.

The next thing will be killing next door brother. That high jacking will be thing of the past because there will be no fuel.

Where is ZBC of Zimbabwe , and so will be SABC. I see SABC starting to cut on other programs. Thus how it started with ZBC.

Eskom will not survive nor will it function as it used to be. It will be cycled until you feel the pinch.

Privatise and control the private and stop this nuisance of white monopoly and no the game of control.

How many people are paying income tax in South Africa. Has EFF spoken about that?

Has dead ANC spoken about that.

Why did the Mayiwas went to Afriforum for their case .

Food for thought South Africans. Let’s put our hearts where our mouth is. Let’s tell it as is. Choose what will feed you and stop running the streets for somebody is enjoying your sweat on a sofa doing fukol