It has been reported that two people have died and 20 or even more were left injured after a tornado hit the Mpolweni settlement near Wartburg in KwaZulu-Natal on Tuesday afternoon.   A ER24 spokesperson, Ross Campbell said in a statement that paramedics arrived on the scene at 5.20pm after having received a call from Disaster Management and Search and Rescue. 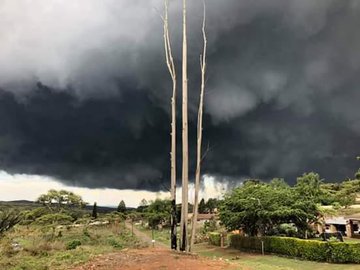 Other parts of the country:

Severe thunderstorms were also observed in the southeast of Alice moving towards the Ngqusha LM and Buffalo City Metro and were still expected over Intsika Yethu LM, Engcobo LM, Amathole DM and OR Tambo DM in the Eastern Cape, with possible hail, heavy downpours and damaging winds.

The SAWS said in a statement earlier yesterday that the first significant summer rainfall could lead to potential flooding, especially in KwaZulu-Natal, as well as the extreme eastern parts of Mpumalanga and Limpopo.
*

“Two adults were unfortunately declared dead on the scene. ER24 set up a triage area and treated and transported another nine patients for minor to moderate injuries to various hospitals in the area.

“Provincial also transported a further two bringing the total injured on scene to 20.

“An adult woman who had suffered serious injuries as a result of losing control of her vehicle during the storm was treated with advanced life support interventions before being taken to Mediclinic Pietermaritzburg for further care.”

Power lines were destroyed and numerous animals were also injured or killed.

“The Fire Department and SAPS were also on scene. The rescue effort was called off at 11.53pm last night and resumed again this morning.”

Video footage of the tornado went viral on social media.

“At this stage, we can confirm that there was a severe thunderstorm over New Hanover, which developed and formed a tornado. The winds that were driving the storm was quite strong, ranging between 25 and 37 km/h and eventually, a tornado was formed,” said forecaster Wiseman Dlamini.

The South African Weather Service issued a watch for severe thunderstorms over eThekwini, uMshwathi, Umvoti, and Nquthu in KwaZulu-Natal moving towards iLembe, King Cetshwayo and uLundi, with possible hail and heavy rain.

High rainfall totals had been recorded across KwaZulu-Natal as showers were expected on Wednesday.

“Accumulated rainfall amounts for Thursday and Friday could exceed 100-150mm in places over KwaZulu-Natal,” it said.

On Tuesday, the department of cooperative governance and traditional affairs (CoGTA) in KwaZulu-Natal activated councillors and volunteers to assist affected communities after what has been described as a tornado hit New Hanover, Pietermaritzburg.

The tornado, according to the department, “ripped through the area, injuring scores of people and damaging homes and public infrastructure”.

This was confirmed to News24 by the South African Weather Service (SAWS) forecaster Edward Engelbrecht.

“It was a tornado on Tuesday afternoon in New Hanover, Pietermaritzburg.”

He said a team had yet to rate the scale of the damage caused by the tornado.

“The MEC and premier will be leading interim relief measures in the area. We will soon be able to provide more information on the extent of the damage and whether any casualties or injuries have been reported.”

Mzila said teams were working throughout Tuesday night to provide relief in the area.

“A number of homes have collapsed, countless trees have been uprooted and the electricity supply in the area has been interrupted. Our teams are working hard to provide support to the affected communities. There are fears of possible missing people and deaths.”

Engelbrecht told News24 that some of the videos going viral on social media indicate a supercell thunderstorm, which often have a propensity to produce severe weather, such as damaging winds and sometimes tornadoes.

Elemente – Elements
Nature and elements are with us and it will not just go away.