Multiple tornados has been reported in Mpolweni near Wartburg with social media abuzz with comments and even a video showing a twister approaching a power station. Multiple tornados has been reported in Mpolweni near Wartburg with social media abuzz with comments and even a video showing a twister approaching a power station.

Capital Newspapers has not as yet received official confirmation from authorities in the area and is currently contacting emergency services and local police.

However,  an official from uMgungundlovu Emergency Services confirmed that a severe storm has hit the area, reporting that several homes have been destroyed. An Eskom technician working in the Midlands also confirmed that colleagues have reported a severe storm in the area.   In the video posted by Garfield Randeree, a large twister is seen touching down in an area that resembles the Wartburg/Seven Oaks region. The video was taken by two men driving in a bakkie.

As the men film the tornado, they encounter severe hail and trees lining the road uprooted and snapped at their trunks.   Another video showing a twister forming over canefields has multiple smaller vortices surrounding the main funnel cloud.   Residents in Howick are also reporting severe storm systems with one social media user commenting that a tornado seemed imminent. Mark Handman posted a picture that was shared on the Storm Report Facebook page showing a dense black cloud over New Hanover approaching PMB.

Meanwhile, another related storm system tore through Pietermaritzburg at around 4pm uprooting trees in the city and toppling power poles in the Mountain Rise area. Emergency services were responding.    The SA Weather Service issued a warning this afternoon urging residents to take shelter from approaching storm systems.   “There is extreme danger to life due to fast flowing rivers. There is also a possibility of mudslides and landslides especially along elevated areas,” said the service. 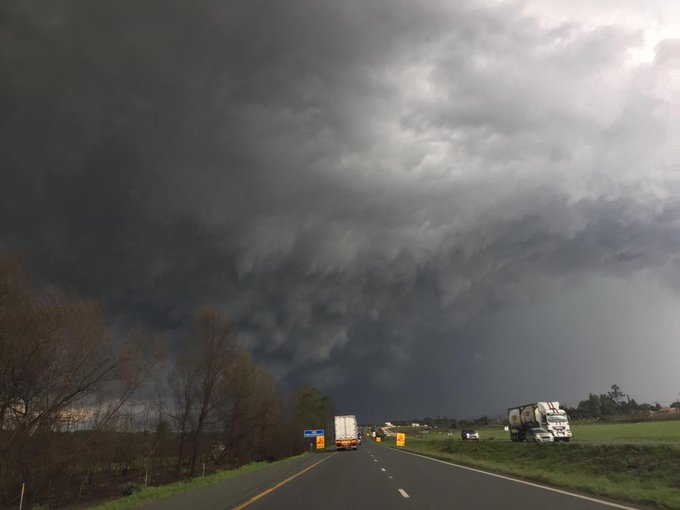 the Stomchasers view…😁😁 I can hear Reed Timmer in the background going nuts…😁😁😁 pic.twitter.com/1esogeuqfs