The US Treasury has imposed sanctions against the Gupta family and an associate over alleged corruption in South Africa.   The sanctions were targeted at brothers Atul, Ajay and Rajesh Gupta, and South African businessman Salim Essa.   They are accused of using their friendship with Zuma – there are more names, South Africa’s former president, to profit financially and influence ministerial appointments.    Zuma was not the only one in this corruption folder.   When Ramaphosa entered, he promised to end the corruption and crime, but so far, nothing happened – he only appointed ‘flag” Commissions to tell stories what they did and some of them are living in denial.

The United States has blacklisted three Gupta brothers and their business associate, Salim Essa. In a statement, the US Treasury called them and I quote “significant corruption network” that dispersed bribes and misappropriated millions in state funds.

Excellent news , but what will the ANC do about this sanctions
(Office of Foreign Assets Control)   (OFAC)

The Treasury said its Office of Foreign Assets Control sanctioned members of a significant corruption network in South Africa that leveraged overpayments on government contracts, bribery, and other corrupt acts to fund political contributions and influence government actions.

“The Gupta family leveraged its political connections to engage in widespread corruption and bribery, capture government contracts, and misappropriate state assets. Treasury’s designation targets the Guptas’ pay-to-play political patronage, which was orchestrated at the expense of the South African people,” said Sigal Mandelker, Treasury Under Secretary for Terrorism and Financial Intelligence.

“The Guptas and Essa have used their influence with prominent politicians and parties to line their pockets with ill-gotten gains. We will continue to exclude from the US financial system those who profit from corruption.”

Ajay, Atul, and Rajesh Gupta immigrated to South Africa (from Uttar Pradesh) in the 1990s, and due in large part to their generous donations to a political party and their reportedly close relationship with former South African President Jacob Zuma, their business interests expanded.

The family has been implicated in several corrupt schemes in South Africa, allegedly stealing hundreds of millions of dollars through illegal deals with the South African government, obfuscated by a shadowy network of shell companies and associates linked to the family.

“The US Treasury imposed sanctions against four businessmen who it said were members of “a significant corruption network” in South Africa and had paid bribes and used other underhand measures to influence government appointments and contracts.

The sanctions were levied against brothers Atul, Ajay and Rajesh Gupta, and Salim Essa, said Sigal Mandelker, the Treasury’s under-secretary for terrorism and financial intelligence. The four have all denied wrongdoing.

“The Guptas and Essa have used their influence with prominent politicians and parties to line their pockets with ill-gotten gains,” Mandelker said in a statement. “We will continue to exclude from the US financial system those who profit from corruption.”

WHAT THE GUPTAS pulled off in South Africa has been extensively documented: the backroom deals, the rigged contracts, the wholesale plunder of national resources. The brothers, who declined to comment for this story, have denied all the accusations against them, and have yet to face charges. But the global arc of the tale—from a provincial town in India to the corporate boardrooms of London and New York—offers a case study in a new, systemic form of graft known as “state capture.”

This was a modern-day coup d’état, waged with bribery instead of bullets.   It demonstrates  how an entire country can fall to foreign influences without a single shot being fired—especially when that country is ruled by a divisive president who is skilled at fueling racial resentments, willing to fire his own intelligence chiefs to protect his business interests, and eager to use his elected position to enrich himself with unsavory investors. The Guptas had immigrated to South Africa from a backwater in India, but the skills they learned there proved indispensable in an age of globalized corruption. 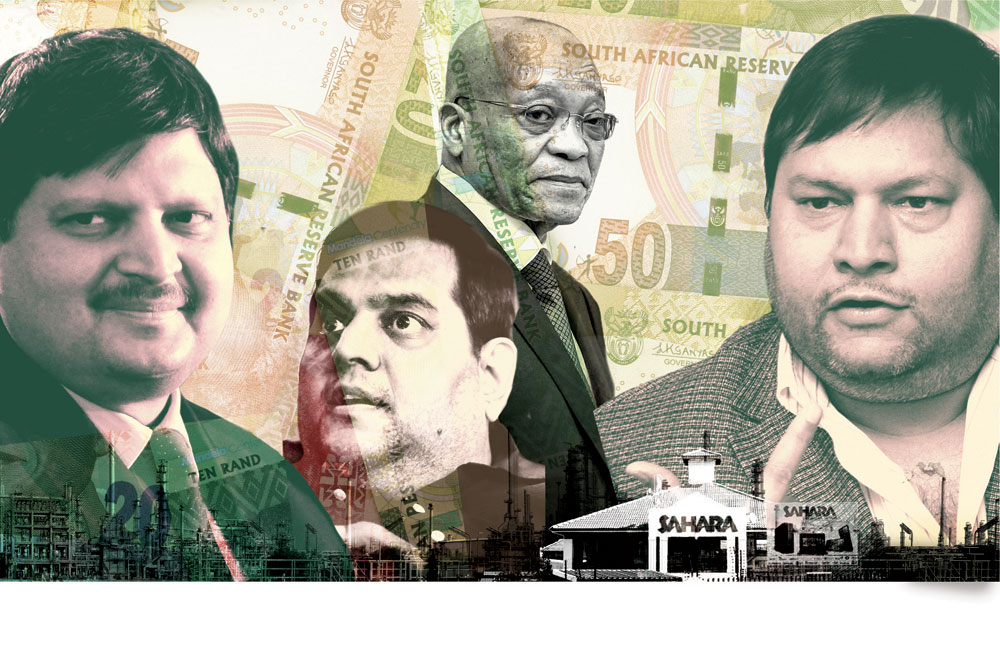 The Guptas, who were canny investors, had begun playing the long game from the moment they met Zuma. They put his son Duduzane on their payroll in 2003, and continued to promote him even after Zuma’s fall. The youngest Gupta brother, Rajesh—nicknamed Tony—was especially close to Duduzane, who was “in and out of their house like a fourth Gupta,” according to Pahad, their A.N.C. ally. Duduzane was eventually made a director of several Gupta-linked companies. The brothers helped set him up in a $1.3 million apartment in the Burj Khalifa in Dubai, the world’s tallest skyscraper, and paid for his five-star vacations. (Duduzane, who declined to comment for this story, has denied owning property in Dubai.) In 2014, when Duduzane crashed his Porsche into a minibus, killing two passengers, the first person he called was Rajesh.

FROM THE MOMENT Zuma was elected president, the Guptas began to plunder the South African government on an unprecedented scale. It was the perfect arrangement: Zuma did not have to be present in the room, or even included on e-mails, while the Guptas cut deals and moved money in and out of the country. Ajay, one government whistle-blower later recounted, would lounge on a sofa during meetings with his shoes off, wearing a T-shirt and gray track pants, looking like a swami who expected people to “kiss his feet” as he brainstormed ways to bribe officials. The Guptas had taken the model of their father’s fair-price shop and exaggerated it to fit the modern economy.

The United States Treasury Department has announced sanctions against the Gupta family, referring to their operations as a significant corruption network in South Africa that leveraged overpayments on government contracts, bribery, and other corrupt actions.

Business opportunites are getting slimmer for the conterversial gupta family. The United States Treasury is the latest to announce that it is banning the brothers from doing business in the country

It started with black market rations and ended with “the wedding of the century.” Novelist Karan Mahajan travels to India and South Africa to understand how three small-time investors fleeced an entire country—aided by some of the world’s most respected consultants.

The three Gupta brothers—Ajay, Atul, and Rajesh—had bought the Optimum Coal Mine in December 2015, adding it to the tentacular empire they were building across South Africa, with interests in uranium deposits, media outlets, computer companies, and arms suppliers.

The miners, the union leader told me, would watch as the Guptas landed their helicopter in the parched soccer field with its rusty goalposts, only to swagger around with their gun-toting white bodyguards and take their kids to the mine vents without protective gear. Sometimes, when the brothers were in a magnanimous mood, they would dole out fistfuls of cash to miners who had been particularly obsequious that day. At the same time, they cut corners viciously. Health insurance and pensions were slashed. Broken machines were patched up with old parts from other machines. Safety regulations were flouted.

Some elites welcomed men like the Guptas, who could infuse cash into a country starved by anti-apartheid sanctions. Back in India, the Guptas had been small-time businessmen, but with a highly ambitious streak. This ambition had come down to them from their father, a devout man who wore a trilby hat, dabbled in tantric beliefs, and ran a fair-price shop in the city of Saharanpur that provided government-subsidized essentials like rice and sugar to the poor. In the Indian economy, fair-price shops are infamous nodes of corruption. Many of the rations they are supposed to provide wind up being diverted to the black market, where they are sold at inflated prices, bypassing the poor altogether.

Motsoeneng enjoyed curry with the Guptas

2 gedagtes oor “US: Financial and Travel Sanctions against Guptas in SA and US – Corruption and Human Rights Violations”