Some articles claim it as unrest – while rioting or acts of arson is happening in South Africa.   Arson is the crime of willfully and maliciously setting fire to or charring property.     In such cases, a person destroys their own or others’ property by burning it and then lies about the real cause.   Some owners are lucky to have insurance policies, but not all have the money to do it.   A person who commits arson is called an ‘arsonist‘. 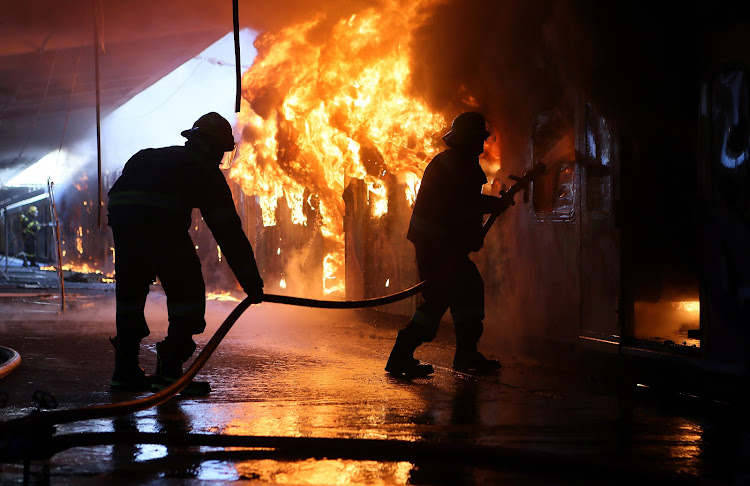 Arson is a crime and can kill the driver and all in the vehicles.   It is a danger for other people that use the road.

Arson is the unlawful and intentional setting fire to an immovable property belonging to another.
https://www.saps.gov.za/faqdetail.php?fid=9

Breaking or entering any premises, whether under the common law or a statutory provision, with intent to commit an offence.

A Notice from the City of Cape Town

The City of Cape Town has deployed considerable resources to assist SAPS with the ongoing unrest and vandalism in the Dunoon/Milnerton area.

The unrest started earlier this week – allegedly in response to an operation by our Traffic Service, around minibus taxis. Taxi drivers and owners believe that they should not be fined or arrested for offences and that the City should engage them first in discussions about these offences. This is a preposterous proposal. Public transport operators and owners need to realise that the law applies just as much to them as every other motorist and that they have a larger burden of responsibility than anybody else on the road. Their conduct is a disgrace.

The violence, injuries and damage to public and private property cannot be condoned, and the City calls on the SAPS to arrest those responsible.    The City strongly condemns the disruption to motor vehicle traffic and commuters yesterday and today as well as the cowardly attacks on private motor vehicles by so-called protestors.

We have also had at least two incidents where traffic officers have been attacked and we call on anyone with information about these attacks to come forward so that the perpetrators can be brought to justice.   Currently, the City has 71 traffic officers and 52 vehicles in the affected areas, assisting with traffic management and clearing of roads. The Metro Police Department’s Tactical Response Team has also been deployed, along with staff from other areas, to support the SAPS public order policing unit.

The water cannon is currently undergoing repairs after electrical systems damage and we hope to deploy it within the next couple of hours.   This is not the first time that public transport operators react violently to our efforts to enforce the law, but the City will not bow to this type of intimidation.   As Mayoral Committee Member for Safety and Security, I am calling on the senior staff within the Directorate to arrange for an extended and intensive lockdown operations around public transport in Dunoon to ensure that the perpetrators understand that selfish, violent and reckless behaviour has legal consequences.

Vehicles were stoned and burnt down in flames as violent protests flared up for a second day on 27 September in and around Dunoon in Cape Town.

28 September 2019 Violence in the Western Cape

They do not want busses at all

A MyCiTi bus goes up in flames during unrest in the Dunoon and Joe Slovo areas of Cape Town on September 27 2019.

Update: #MyCiTiAlert Routes 260, 261 and 262 remains suspended until further notice. Route T03 is currently deviating via Montague Drive, due to protesting.

“Anyone arrested will be investigated in terms of the Criminal Matters Amendment Act, which provides for stricter bail conditions and harsher sentences, including up to 30 years’ imprisonment for those caught and convicted for destruction of essential infrastructure.”

“Taxi drivers and owners believe that they should not be fined or arrested for offences and that the city should engage them first in discussions about these offences,” Smith said.     Dunoon Taxi Association general secretary Frank Qotyiwe distanced his members from the chaos, which has coincided with a taxi strike in the area.

He admitted association members had been illegally operating taxis on a number of routes across the city for seven years, and had suspended services for fear of vehicles being impounded by Cape Town traffic officers.

“We have been trying to engage the city, urging the authorities to give us operating licences for other taxi routes, but they have constantly turned a deaf ear and the only priority for the city is the MyCiTi bus service,” he said.