September 2018 – A BRUTAL crackdown against religion in China has seen crosses hauled down from Christian churches and replaced with portraits of the country’s President Xi Jinping and former Communist Party leader Mao Zedong.    He said the only places where the Bible could be discussed freely were small church set-ups in houses, where 20-30 people could gather.   Under Chinese law, religious followers are only allowed to worship in congregations registered with authorities, but many millions belong to so-called underground or house churches that defy government restrictions. 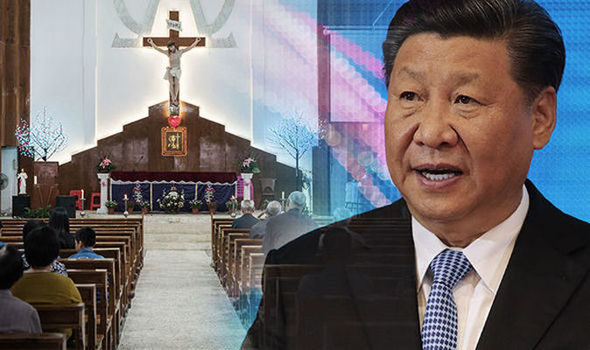 Mr Liang said dozens of churches had been shut down in his county and those remaining were beginning to “look like culture clubs” rather than religious buildings.   He said: ”We now have our cross in the middle of our presidents’ portraits, which are President Xi and Chairman Mao’s portraits.”

Bob Fu of the US-based group China Aid said the closure of churches in central Henan province and a prominent house church in Beijing in recent weeks represents a “significant escalation” of the crackdown. He said: “The international community should be alarmed and outraged for this blatant violation of freedom of religion and belief.”

The latest tightening of control follows moves earlier this year to ban the online sale of bibles across China.

Chinese pastors and the U.S.-based group China Aid report that Chinese Communist Party officials forcibly shut several churches in central Henan province and Beijing in recent weeks, according to The AP. The escalation is part of the officially atheist Communist Party’s efforts to “sinicize” Christianity, or make it more culturally Chinese.

Fu also cited video footage showing what seemed to be bibles aflame with forms allowing believers to renounce their faith nearby, The AP reported. Fu said the forms marked the first time since freedom of religion was written into the Chinese Constitution in 1982 and since Mao’s Cultural Revolution of 1976 that Christians had been compelled to renounce their faith.

One Chinese pastor who asked not to be identified told The AP that officials entered his church at 5 a.m. and began removing items and burning bibles, crosses and furniture.

China has long been hostile to Christianity, and its Communist Party is in the process of reinterpreting and re-translating the bible to conform with “Chinese-style Christianity.” The government announced the impending “translation” in March, and bibles started disappearing from online marketplaces soon afterward.

Local governments have also shut the state-approved “sanzi” churches. Sunday schools and youth ministries have been banned. One of the first signs of a crackdown was when authorities forcibly removed more than 1,000 crosses from sanzi churches in Zhejiang province between 2014 and 2016.

“The goal of the crackdown is not to eradicate religions,” said Ying Fuk Tsang, director of the Christian Study Centre on Chinese Religion and Culture at the Chinese University of Hong Kong. “President Xi Jinping is trying to establish a new order on religion, suppressing its blistering development. [The government] aims to regulate the ‘religious market’ as a whole.”

“The government has orchestrated a campaign to ‘sinicise’ Christianity, to turn Christianity into a fully domesticated religion that would do the bidding of the party,” said Lian Xi, a professor at Duke University in North Carolina, who focuses on Christianity in modern China.

Almost three months later, Wang’s hypothetical scenario is being put to the test. The church in south-west China has been shuttered and Wang and his wife, Jiang Rong, remain in detention after police arrested more than 100 Early Rain church members in December. Many of those who haven’t been detained are in hiding. Others have been sent away from Chengdu and barred from returning. Some, including Wang’s mother and his young son, are under close surveillance. Wang and his wife are being charged for “inciting subversion”, a crime that carries a penalty of up to 15 years in prison.

Now the hall Wang preached from sits empty, the pulpit and cross that once hung behind him both gone. Prayer cushions have been replaced by a ping-pong table and a film of dust. New tenants, a construction company and a business association, occupy the three floors the church once rented. Plainclothes police stand outside, turning away those looking for the church.

China’s Communist party is intensifying religious persecution as Christianity’s popularity grows. A new state translation of the Bible will establish a ‘correct understanding’ of the text.   In late October, the pastor of one of China’s best-known underground churches asked this of his congregation: had they successfully spread the gospel throughout their city? “If tomorrow morning the Early Rain Covenant Church suddenly disappeared from the city of Chengdu, if each of us vanished into thin air, would this city be any different? Would anyone miss us?” said Wang Yi, leaning over his pulpit and pausing to let the question weigh on his audience. “I don’t know.”

Muslim countries, many of which are deeply indebted to China through its Belt and Road Initiative (BRI), have failed to condemn or have actively supported what China is doing in Xinjiang. But the track record of western governments is not much better, as we saw with Italy’s recent backing of the BRI. Companies, institutions and national governments that pay lip service to human rights need to be held to account for their actions if they choose to engage with the products, technologies and policy initiatives that enable what is going on in Xinjiang. We owe it to the courageous people who are speaking out in the face of direct harassment by China’s security forces to keep this situation firmly on the international agenda.
China – Mosques are not the only targets. Whole cities are being redesigned to facilitate maximum security and surveillance of the local population. Sites of architectural interest such as the ancient city of Kashgar have been demolished and rebuilt to suit the needs of what the government proclaims will be a flourishing tourism industry in Xinjiang. And it’s not just the built heritage that is being destroyed. The bulldozer is also at work on communities, culture and people’s lives.

Ten years ago, I started researching Islam among the Uighurs. I spent my summers travelling around the Xinjiang region in western China. I took long bus journeys through the desert to Kashgar, Yarkand and Kucha, slept on brick beds in family homes in remote villages, stopped off at Sufi shrines, and visited many, many mosques. My husband was working with me, and we dragged our kids along for the ride. The kids were quite small and not at all interested in our boring interviews with imams, and I bribed them with treats. I have a lot of photos of them sitting in the dust outside mosques, faces smeared with ice-cream, playing on their iPads.

It was an incredible time for mosque building in Xinjiang. After the Cultural Revolution, Uighur and Kazakh Muslims began to reconnect with their faith. They resumed the traditional practices of pilgrimage and festivals at the shrines that lie deep in the Taklamakan desert. They began to learn about Islam in the wider world; people who could afford it travelled to Mecca for the hajj, and they began to rebuild their mosques. As local communities grew richer they invested in bigger and more beautiful mosques; people crowded into them for Friday prayers, and they served as living symbols of community identity and pride.

2019 – The BBC has found new evidence of the increasing control and suppression of Islam in China’s far western region of Xinjiang – including the widespread destruction of mosques. Authorities provided rare access to religious sites and senior Islamic officials to support their claim that their policies only target violent religious extremism, not faith itself.
https://www.youtube.com/watch?v=DewWSGTwOXo