When we think about the deserts of the world, water abundance is one of the last things that come to mind. But that might change for the Taklamakan Desert in northwest China.   While studying the amount of carbon dioxide in the desert’s air, a team of researchers was surprised to learn that large amounts of the greenhouse gas were disappearing around a region of the desert called the Tarim basin. 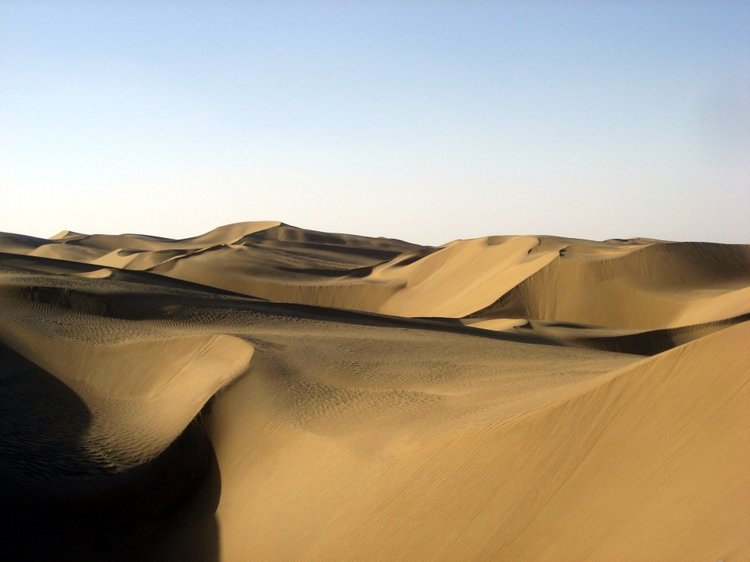 The most likely explanation, they recently reported in the journal Geophysical Research Letters, is a massive underground ocean that has more water than all five Great Lakes in North America combined.

But some disagree with these claims.

“Never before have people dared to imagine so much water under the sand,” professor Li Yan — who led the study at the Chinese Academy of Sciences’ Xinjiang Institute of Ecology and Geography in Urumqi, the Xinjiang capital — told the South China Morning Post, where we first learned about the study. “Our definition of desert may have to change.”

A basin is, by definition, a valley that collects water from drainage systems, like water that has melted and is running down the face of nearby, snow-capped mountains. Two mountain ranges border the Tarim basin: to the north are the Tian Shan Mountains, and to the south are the Kunlun Mountains.

But, if you look at the Tarim basin, you won’t see any water:

That’s partly because locals collect most of the melt water to irrigate crops. The rest either seeps into the ground or evaporates into the dry desert air.

So how did this desert come to be such an active carbon dioxide sucker?

It dates back to 2,000 years ago when settlers in the region began irrigating the land, the scientists suspect. And the soil of the local farmlands is salty, like the ocean, which dissolves carbon dioxide from the air more readily than fresh water.

“As a result, agricultural development over human history has enhanced the carbon sink,” they write in their report.

The team also used their carbon-dioxide measurements from underground water samples and compared it with CO2 levels in the surface water to calculate how much water had seeped into the basin over time and the overall amount of water underground.

They estimate that as much as 10 times the amount in all of the great lakes could be down there, they told South China Morning Post.

But Matthew McMackin — who works for a consulting firm, Fugro Consultants, that identifies geologically safe places for construction — warns this estimate is overly optimistic:

“If you do a little math to evaluate that statement critically it doesn’t stand up,” McMackin told Business Insider in an email. He went on to calculate how much water might actually be under the basin (his calculations are his own and were not in collaboration with the authors of the paper):

If we assume a generous porosity of 10% in the Tarim Basinto 283 feet would contain about 1/3 of the water in the Great Lakes. Not unique or particularly remarkable.”