What is the difference between a flight in business class and the gupta style?   Julius Malema has issued a very cheeky response to claims that he isn’t practicing what he preaches, after he was snapped taking a business class flight.    The term “champagne socialist” is used to refer to someone who preaches ideas such as marxism, communism – and yes, socialism – while treating themselves to flashy, expensive goods. 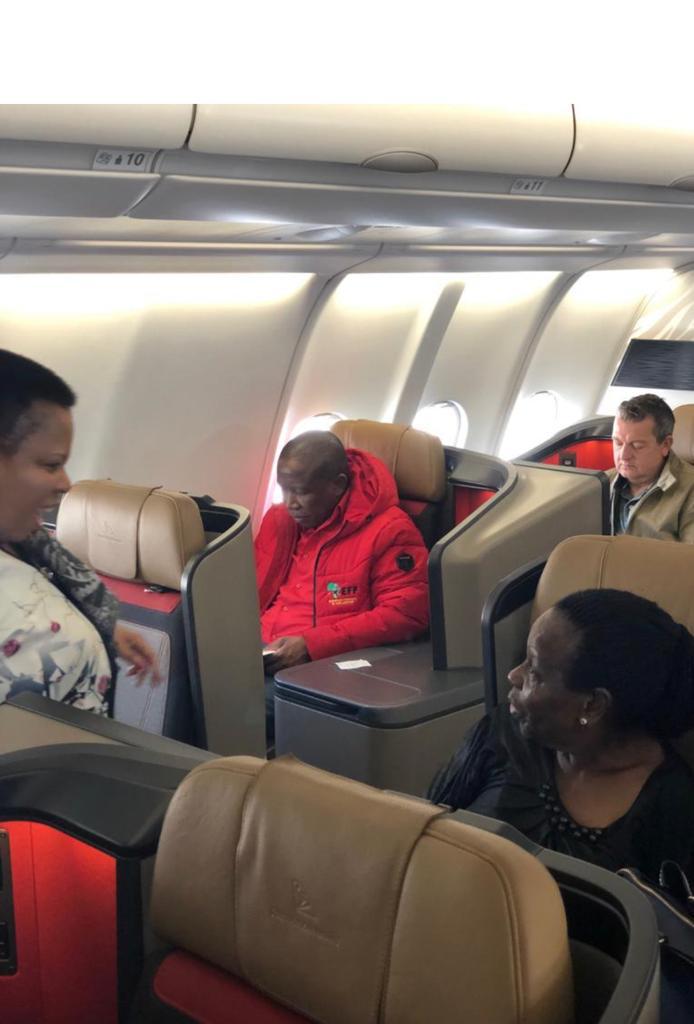 Despite his socialist agenda, Malema has an ostentatious lifestyle. His Louis Vuitton loafers, paired with the EFF’s flashy red jumpsuit – representing communism and labour – are not unlike fellow “champagne socialist” Fidel Castro, who famously wore Rolexes.

And what of the negative reputation socialism had after the collapse of the Soviet Union, along with mounting pressure on Venezuela’s socialist government?

Malema says China is still a “model” for nations that want to take up the socialist cause and that they are in the process of getting there. “They (the Chinese) have never abandoned the strategic vision and mission of the Communist Party.”

The EFF leader, who flew into Cape Town ahead of Thursday’s session of Parliament, was pictured sat in the luxury of business class during a domestic flight. He was also accused of taking in a few sips of Moet, an opulent brand of champagne, after he was snapped by another first-class passenger.

Enjoying some Moët et Chandon flying in business class while preparing to fight for the poor.
CONFLICT OF INTEREST

A conflict of interest has been dug out of the bottom of a trash can in Camps Bay. But what started out as a debate on “champagne socialism” has become something of an inquiry into journalistic ethics. Needless to say, the EFF are raging with the Daily Maverick following their latest article that takes aim at the red berets – and their H&M purchases.

Veteran reporter Marianne Thamm did a bit of “dumpster diving” following the second SONA of the year in June. She tracked down an entourage of EFF members to a residency they had rented in the plush Camps Bay suburb of Cape Town during the event.

What she literally called “trash journalism” ended up finding a lot of empty alcohol bottles (of the pricey variety) and receipts from stores such as Zara and H&M – the latter of which was subject to intense backlash from the EFF following the now-infamous “racist hoodie advert” of 2018.

Thamm reasoned that this lavish night of partying was the total opposite of the values the party had been preaching. The luxury villa, the expensive booze and apparent endorsement of H&M was, in her book, in contravention of the party’s manifesto. But not everyone has been impressed by this act of snooping.

We decided to stick our head above the parapet and talk to the EFF about the allegations. However, Secretary General Godrich Gardee was in no mood to even entertain the report. When given a chance to set the record straight, the party executive abruptly declined, slamming the standards of journalism in South Africa.

It would seem the EFF had pre-empted some elements of Thamm’s article, too. During a press briefing on Tuesday, Julius Malema made reference to both H&M and “flavoured condoms”:

EFF simmering after journalist finds H&M receipts in their trash