Lenasia South protests 2019 and Corruption – Government officials – 2013
The Gauteng government said it would approach the courts in a bid to get an interdict against land invaders in Lenasia.   Maile has promised residents that the government was working on a solution to assist both parties.   He said they would be approaching the courts to ask for an interdict against any further illegal land occupation in Lenasia.

“And some of those eviction orders have not been executed; so, that’s the other thing we’ve established.”   Tensions have been high in the area between homeowners and those who have built shacks in the area.

Infrastructure Development MEC Tasneem Motara said the government would need to find money to address the housing crisis in the province.   “If it needs engagement with the National Treasury and national departments responsible for things related to this, municipalities and all, we’ll have to engage further.”

Housing spokesperson Fred Mokoko said: “Government is not just demolishing. We issued notices to people as they started building and they ignored them.” 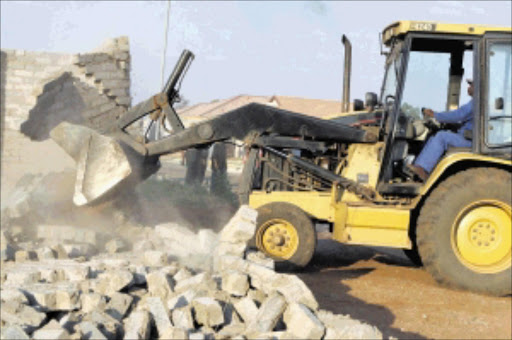 GOVERNMENT has started with the demolition of hundreds of illegally built houses in Lenasia South, Johannesburg in 2010.  The first dozen of partially built structures went down shortly after two alleged land hijackers who sold stands and built some of the houses made their first appearance in the Protea magistrate’s court on fraud charges on Friday.

Department of local government and housing officials had to get police reinforcement as they lead a grader through protesting residents who faced the prospect of their illegally houses being flattened.

There are about 300 stands and houses affected in Lenasia and about 500 in Lenasia South. The situation is similar in Lawley and Ennerdale.   An official said: “There are also many other fraudsters in Lenasia South, Lawley, Ennerdale and Vaal areas. Land invasions in these areas have escalated despite arrests that took place in 2008.”

Sowetan has a list of people believed to be selling the land. Others are claiming to be registered agents who have a government mandate to sell stands.   But Mokoko dismissed this saying that “there is no government land for sale and all such transactions were illegal. Government will never give its land to a handful of people to sell on its behalf”.   Water and electricity to the houses are also connected illegally.   Housing plans were not approved by the municipality and accounts do not exist.

Many residents who spoke to Sowetan on condition of anonymity claimed that they spent between and R250,000 and R500,000 to build the houses.

On 4 November 2013 a media statement from the Department of Human Settlements greatly welcomes the decision of the Johannesburg  Magistrate Court to convict four fraudsters involved in the illegal sale of government land in Lenasia, south of Johannesburg.

This is an indication of how serious the Department is, in dealing with corruption within the system. The Department investigations have focused on three areas;

Since 2007, a total of 37 504 government officials have been investigated, 2 236 have been convicted and 5 506 have signed Acknowledgement of Debt (individual’s agreement and commitment to repay government money after being convicted for fraud). About R 50 million has been recovered to date.

The Department would like to urge residents and the public at large to expose criminals by coming forward with information on other suspected fraudulent activities as this will help to eradicate the corrupt elements stealing land intended for the building of adequate human settlements for our poor people.