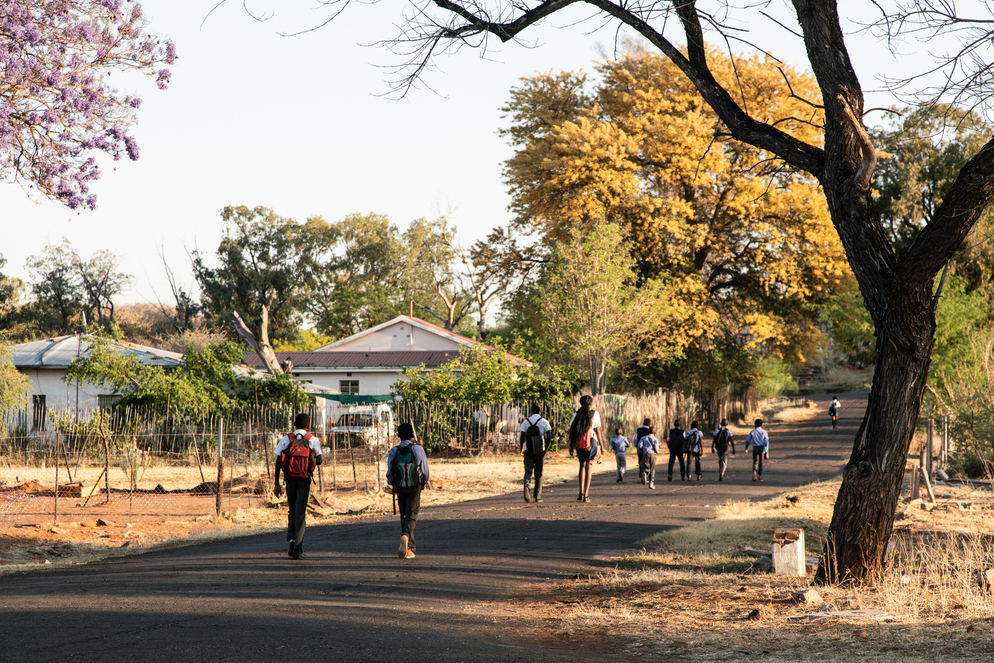 Tribute to all our heroes

Pomfret’s roads still have names like General Liebenberg Avenue and Askari Street, reflecting its origins as a South African Defence Force (SADF) base. In 1989 it was given over to the veterans of 32 Battalion: the Angolan soldiers from the FNLA and Unita movements, who had fought for the SADF against the MPLA government in the 1970s and 1980s.

Today, the tennis court once used by white SADF officers echoes with the shouts of children playing soccer. Calls of “boa tarde!” (good afternoon) ring out as a passer-by spots a neighbour sitting on the stoep of one of the neat houses.

No one appears destitute, but their choices are limited. Fernanda Zilia, an elderly woman blind in one eye from a cataract, cares for two grandchildren: “Their father died in August. He went to Pretoria to work for security.”

In Pomfret, “security” is a code word for mercenary work.

Across the road lives Victoria Kamea: “My husband died in 2003. I’m still in the house, and I get money from Mandela. Mandela gives me R700 a month. Without this I would die of hunger.”

“Mandela money” (child-support grants or pensions) and “security” are Pomfret’s two sources of bread. Not everyone qualifies for Mandela money, which is why the town has acquired a reputation as a mercenary breeding ground, even though most of the “security” men have long since moved away.

Last week South African National Defence Force General Bobo Moerane confirmed that the town would be closed owing to contamination from an asbestos mine, and the residents offered housing at various other South African locations.

African National Congress local councillor Domingos Kapanga, who left Angola as a child with his parents, says he intends suing the government to stop the closure. “It is not asbestos that is stopping us from staying here,” he said. “They say the people are highly militarily trained and they become a problem for security.”

Angolans constitute the large majority of Pomfret’s 6 000 people who have developed a strong sense of community.

“We can’t leave until the South African government gives us money,” insisted one woman. “They brought us from Namibia and promised this was the final place for us.” But others complain about the remoteness of Pomfret and the decaying infrastructure: “One day there’s water, then none the next.”

“Let the government be accountable to the people, let us have what we deserve as South Africans,” Kapanga says. “If they don’t, there’s a country called Angola waiting for us.”

For Kapanga’s generation, Angola exists only in parents’ stories. Nevertheless, Angolan ambassador Isaac dos Anjos confirmed that the Angolan and South African foreign ministers had discussed the possible return of the veterans and their families to Angola.

The veterans themselves talk of returning to Angola “if God so wishes”, yet the country remains for them a remote memory. Santos Daniel says he is from Silva Porto. Having left Angola at the time of independence, he knows only this colonial name for the city now called Kuito. “We have nothing here, but we have nothing out there either, so it’s better to stay where we are.”

The people living in Pomfret are faced with its destruction. They now have to leave their town, friends and relatives behind. After 30 years living as refugees, many of them are now on the brink of displacement once again. Since they were told to leave there has been a complete breakdown in the running of government, police, social services and even the sewage. This has led the living conditions to worsen dramatically. Once the most feared group, the soldiers of Pomfret have now lost all control.
https://www.youtube.com/watch?v=wBdw5TvmJf0

Mercenary Town (2005): The notorious 32 Battalion — black soldiers who fought for white governments – were the shock troops of apartheid. Now the ANC wants to dismantle their retirement town and scatter the community.

The town of Pomfret may stand on the site of an old asbestos mine but it’s the only home the soldiers of 32 Battalion know. When their unit was disbanded at the end of apartheid, they retired here. “This is our land … if we are spread out I believe many of us will suffer”, fears one resident. But when 70 mercenaries, many of them current or former residents of Pomfret, were arrested for attempting a coup in Equatorial Guinea, authorities acted quickly. They announced that Pomfret would be dismantled and its 3,000 residents evicted. “It’s unjust”, complains one former soldier. They feel they’re being punished for their violent past.

Basic Education in North West has closed the only school in Pomfret. The former military base has been abandoned since 2008. And the area has been without water, electricity and other basic services for many months.

The Cemetery at Pomfret. Resting place for so many 32 Battalion Soldiers and family. September 2017

Remnants of 32 Battalion’s Buffalo Base and the cemetery in the Caprivi – October 2009.

God Bless “32 Buffalo Battalion”, thank you for your courage of  fought against communism and terrorism. Will be forever in the history of South Africa, particularly in Angola, in the hearts of the Portugueses of Angola they were betrayed and abandoned by treacherous scoundrels, communist criminals that in Lisbon to Betrayal and crimes against humanity,  they called  of Carnation Revolution, and the truth is:  “Carnation Revolution of Blood!