The now former state prosecutor Gerrie Nel earned his pitbull status with four particular, and notorious, cases.   After his resignation from the National Prosecuting Authority he joined AfriForum.

In 1999, Nel was the founding head of the Gauteng division of the now-defunct Scorpions unit – a position he held until its disbandment a decade later. 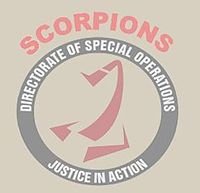 In 2011, Nel received a special achievement award from the International Association of Prosecutors – for his “fierce pursuit of the vision of the National Prosecuting Authority’s ideals to achieve justice in society”.