The island of Guam is incredibly remote   The nearest significant population is in the Federated States of Micronesia, about 920km away. Beyond that, Papua New Guinea is 2,250km away, the Philippines are 2,600km from its shores and Japan 2,600km. 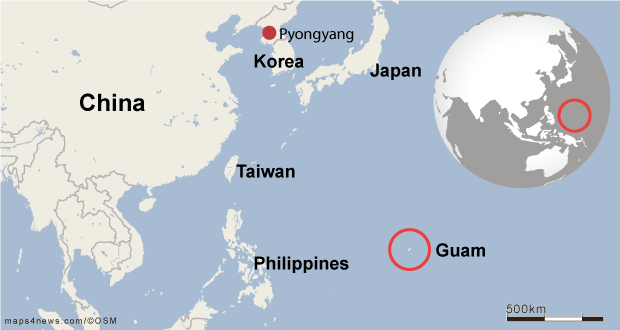 Guam is a 550sq km sovereign US territory in the western Pacific Ocean that serves as a strategic military base. Almost a third of its land controlled by the US military and about 6,000 American troops are based there.  Its location, within range of North Korean medium- and long-range missiles, and military significance to the US make it a logical target for Pyongyang.

Guam was claimed by Spain in 1565 and became a US territory in 1898 during the Spanish-American War.    Japan seized it for about 2½ years during the second World War. In 1950, an act of Congress made it an unincorporated organised territory of the United States.

Protecting the island is the US army’s Terminal High-Altitude Area Defence, or Thaad, which is used to shoot down ballistic missiles.

Guam’s capital city is Hagåtña and its largest city is Dededo. Its chief languages are English and Chamorro. There have been various popular movements pushing for greater self-government or even US statehood, most notably a significant but failed effort in the 1980s to make it a commonwealth on par with Puerto Rico.

Hagåtña and in Spanish Agaña, is the capital city[3] of the United States territory of Guam. From the 18th through mid-20th century, it was Guam’s population center, but today it is the second smallest of the island’s 19 villages in both area and population. However, it remains one of the island’s major commercial districts in addition to being the seat of government.

The US Army is sending one of the two Iron Dome air-and-missile defence batteries to a key military facility near China. The US is planning to deploy the Israeli Iron Dome system to Andersen Air Force Base in Guam. The deployment will be called ‘Operation Iron Island’ & will evaluate the capabilities of this air defence system. The deployment exercise will see the US gathering data on how it can integrate the Iron Dome with its air defence system. Although the US will not conduct a live fire of the system, it is being seen as a response to China’s growing aggression against Taiwan.