Everyone has the right to an environment that is not harmful to their health or well-being; and to have the environment protected, for the benefit of present and future generations, through reasonable legislative and other measures that prevent pollution and ecological degradation; promote conservation; and secure ecologically sustainable development and use of natural resources while promoting justifiable economic and social development.  (Section 24 of Constitution).

The importance of Mabola is that it is the source of three major rivers – the Pongola, Tugela and Vaal  – which support huge communities and economic activities downstream.

Enkangala supplies water to South Africa’s economic hub, Gauteng, and is an important source for the agricultural sector in the KwaZulu-Natal and Free State provinces.

However, the fate of the Enkangala strategic water source hangs in the balance after Environmental Affairs Minister Edna Molewa approved an application for coal mining by Indian company Atha Africa Ventures. Although the approval was signed off in November 2016, it was only made public in January 2017.   Mabola is part of the Enkangala national freshwater ecosystem priority area.  (WWF.SA)

The organisations opposing this particular mine do so because the proposed mine would be inside a declared protected area and a strategic water source area. It will threaten water security not only in the local area, but in the region. The damage that this mine would do to water resources cannot be undone. All these organisations are deeply committed to job creation and improving the quality of life of local people, but also know that coal mining has devastated the lives, health and well-being of communities across the Highveld.

During November 2019, the Constitutional Court refused a mining company’s final challenge of a 2018 High Court decision to set aside Ministerial approvals for a proposed coal mine in South Africa.   The Constitutional Court had the final say on the approvals for a coal mine inside an Mpumalanga Protected Area and Strategic Water Source Area (SWSA).

The Mabola Protected Environment near Wakkerstroom is part of more than 70,000 hectares of grasslands in Mpumalanga that was declared protected under the Protected Areas Act by the Mpumalanga provincial government in 2014.

This 8,772-hectare protected area was formally proclaimed in January 2014 under the National Environmental Management Protected Areas Act because of its ecological sensitivity as a high-yielding, highly strategic water catchment area within a high-altitude, threatened grassland ecosystem.

In January 2019, the Coalition of civil society organisations who have been challenging mining company Atha Africa’s proposed new coal mine inside a Strategic Water Source Area in Mpumalanga, welcomed the decision of Mpumalanga MEC Vusi Shongwe to withdraw his notice of intention to exclude properties proposed for mining from the Mabola Protected Environment.

Mabola is where the Pongola, Vaal and Tugela rivers converge. It was declared a protected area but only after Atha-Africa received its permits – a development that has environmental groupings, such as Earthlife Africa, in a froth.

Then there’s also the fact that one of the project’s black economic empowerment beneficiaries is none other than Sizwe Zuma, the nephew of President Jacob Zuma. In this period of political subterfuge and fear, it’s easy to suspect Atha-Africa has friends in high places.

The allegations mainly turn on the fact the company was able to win an integrated water use licence (IWUL) and environmental authorisation (EA) for its Yzermyn thermal coal project despite its location in Mabola near Wakkerstroom in Mpumalanga province.

Proposed development of the Yzermyn Underground Coal Mine, close to the town of Wakkerstroom, Mpumalanga Province.

Atha Africa Ventures (Pty) Ltd (Atha) propose to develop an underground coal mine. The proposed project is known as the Yzermyn Underground Coal Mine. Atha obtained the prospecting right to an area of 8,360 hectares and has completed detailed exploration drilling that identified a feasible target area approximately 2,500 hectares in extent. The proposed project will be located close to the town of Wakkerstroom in the Mpumalanga Province of South Africa. 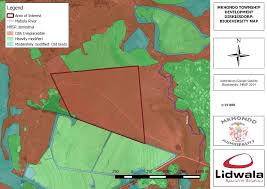 Documents unearthed a week ago show Environment Minister Edna Molewa signed the approval for mining in the Mabola protected environment on August 20 2016, three months before Minister of Mineral Resources Mosebenzi Zwane signed it on November 21.

The permission for Indian company Atha Africa Ventures to mine in Mabola, a critical water catchment area near Wakkerstroom, became effective on the date Zwane signed — although neither department publicised the decision.

Atha-Africa holds an 8,360ha mining right over 12 farms, and plans to use 2,500ha of the right. Known as the Yzermyn underground coal mine, the operation would tunnel under veld currently used for grazing and could operate for 15 years.

BHP Billiton held the prospecting right before transferring it to an outfit called Bunengi Mining in 2011. Atha Africa then bought the right from Bunengi.

Oxpeckers reported in May 2015 that Sizwe Zuma had presented himself at public meetings as a director of Atha Africa, and that the mine was being pushed through because of his ties to “the Zuma clan” in northern KwaZulu-Natal.

In the paperwork filed to form the associated BEE company, Sizwe Zuma was listed as a trustee and his residence was given as Bryntirion Estate, the presidential compound in Pretoria. The phone number listed to him on the same paperwork did not work.

Several trustees of one of Atha Africa’s BEE partners, Bashubile Trust, are believed to be relatives of the president, a claim Atha Africa denies.

In a last-ditch effort to halt the mine, the CER plans to take the ministers’ decision to override the Protected Areas Act to court.

“There is no internal appeal to the ministers’ decision, therefore any aggrieved party may approach a relevant court to review the permission in terms of the Promotion of Administrative Justice Act,” the approval letter states.

The company cannot begin work until several legal challenges and roadblocks are cleared.

Mauritz de Bruin of the Endangered Wildlife Trust, who has spent more than a year in Wakkerstroom to oppose proposed mining in various nearby protected environments, said community members have been monitoring the Mabola mine site to ensure work does not begin before legally allowed.

According to De Bruin, there have been several occasions where community members have had to intervene to keep equipment and workers off the site.

“As long as there’s still a battle to be fought, we will fight it,” De Bruin said, though he acknowledged that those opposing the mine are rapidly running out of options.

Atha Africa needs the area to be rezoned by the Dr Pixley Ka Isaka Seme local municipality, although the company’s statement said it “does not foresee any hurdles as the company has all the relevant mining and environmental approvals”.

The CER and its coalition have challenged both the provincial environmental authorisation and the water use licence, which effectively suspends the licence until it is reviewed.

The greenfield Yzermyn underground coal project is located near the town of Piet Retief in the Dr Pixley Ka Isaka Seme Local Municipality (within the greater Gert Sibande District Municipality), Mpumalanga province of South Africa. The project is 20km northeast of Wakkerstroom, 15km northwest of Dirkiesdorp and 58km southwest of Piet Retief.

SAA can confirm that Mr. Sizwe Zuma has been included on the list of potential new jet fuel suppliers who were invited to the Supplier Engagement Summit. However, SAA is not privy to the information as to whether he is or is not related to the President, as soliciting such detail isn’t part of the Standard Operating Procedure, which is PFMA-based. Supplier Engagement Summits are an acceptable business practice.