“Petsuchos” is the Greek rendering of an Egyptian word meaning “he who belongs to Suchos,” the crocodile god also known as Sobek. The Petsuchos was the sacred crocodile of Suchos kept in a private lake in the city of Crocodopolis. He was an old, pampered beast who wore golden rings in his ears and riveted bracelets on his forelegs.

Sebek, also spelled Sobek, Greek Suchos, in ancient Egyptian religion, crocodile god whose chief sanctuary in Fayyūm province included a live sacred crocodile, Petsuchos (Greek: “He Who Belongs to Suchos”), in whom the god was believed to be incarnate.

During 2016,  the Egyptian Supreme Council of Antiquities announced that a number of mummified animals in Qena governorate was discovered, among them 3 mummified crocodiles, one of them reaches to 4 meters in length, and the other 2 broken mummified crocodiles reach to 120 cm, in addition to mummification tools and rolls of linen.

The Egyptologists said that it was a unique discovery because of god Sobek, the crocodile god was worshiped in Aswan at the temple of Kom Ombo.

The worship of god Sobek went on till the Ptolemaic and Roman dynasties, especially in El-Fayoum and Kom Ombo in Aswan.   The ancient Egyptians did not worship the animals as it widely thought, but they used the animals and its features to symbolize to their gods, such as they referred to god Sobek as the god of evilness and death because the crocodile has these features.

The oldest city in Egypt and one of the oldest in Africa, Faiyum was founded around 4,000 B.C.    Located approximately 62 miles southwest of Cairo, Faiyum is partly located in an area that was once the ancient city of Crocodilopolis, whose inhabitants worshipped a sacred crocodile named Petsuchos who had its own temple pond. Today, there are mounds marking the site of ‘The Crocodile City,’ plus Faiyum is home to bazaars, markets, mosques, and baths. 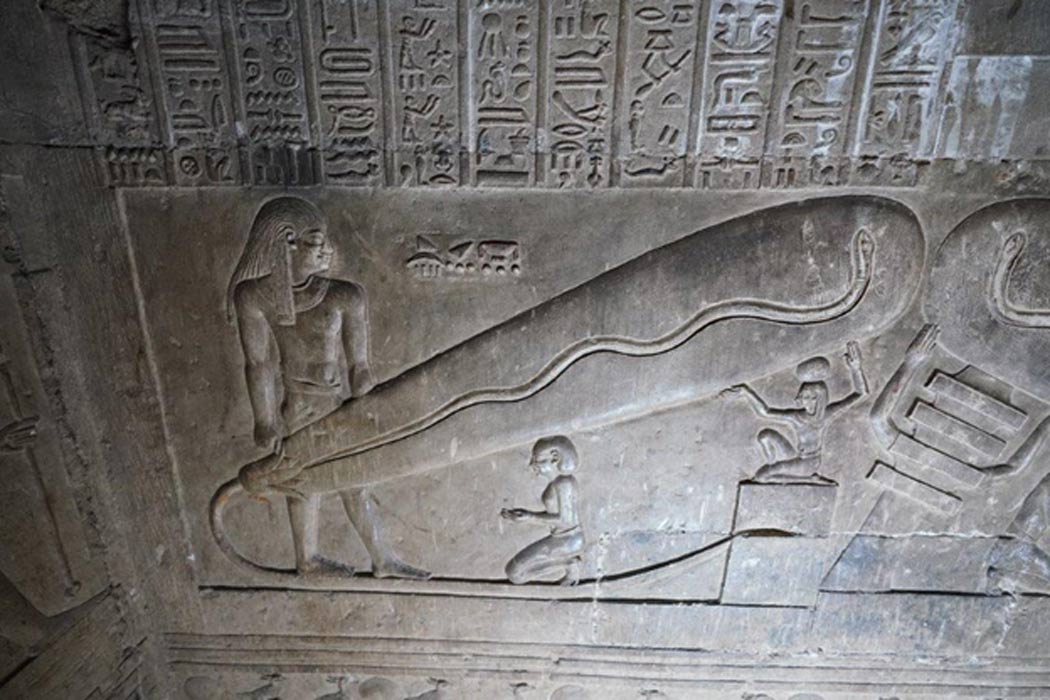 The image known as the Dendera light is found on three stone reliefs in the temple and, at first glance, could be construed as a bulb similar to a Crookes tube, with a lotus “socket” at one end, a “cable” traveling underneath, and a snake-shaped cord “filament” inside. In the most popular representation of the so-called Dendera light a priest is shown holding up the “lamp” and a few smaller figures are seen below it. 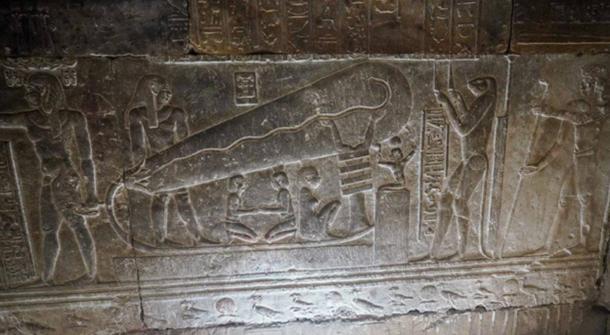 One of the figures appears to be directing the “lightbulb” upwards. A two-armed Djed pillar is also shown with the “bulb” and the hands are apparently connected to the snake/cord inside. A baboon is presented in front of the “lamp” while holding two knives in front of itself.

At a rather isolated place at the edge of the desert, about 2.5 kilometres (1.6 mi) south-west of the modern town, lies what Dendera is famous for, a mostly Greco-Roman temple complex known in ancient Egyptian as Iunet or Tantere. The modern Arab town is built on the ancient site of Ta-ynt-netert, which means ‘She of the Divine Pillar.’ In the Greek era, the town was known as Tentyra.

The whole complex covers some 40,000 square meters and is surrounded by a hefty mud brick wall. The present building dates back to the times of the Ptolemaic dynasty and was completed by the Roman emperor Tiberius, but it rests on the foundations of earlier buildings dating back at least as far as Khufu (known as the Great Pyramid builder Cheops, the second Pharaoh of the 4th dynasty [c. 2613–c. 2494 BC]) but it was the pharao Pepi I Meryre who built the temple.