Choline is an essential nutrient and an organic, water-soluble compound. It is neither a vitamin nor a mineral.    It impacts liver function, healthy brain development, muscle movement, your nervous system and metabolism.  This means it’s required for normal bodily function and human health. Though your liver can make small amounts, you must obtain the majority through your diet.  Cholecalciferol (D3) is a type of  vitamin D found in animal-sourced foods, especially fatty fish, and it’s more effective at raising blood levels of vitamin D than the plant form of vitamin D (D2).. 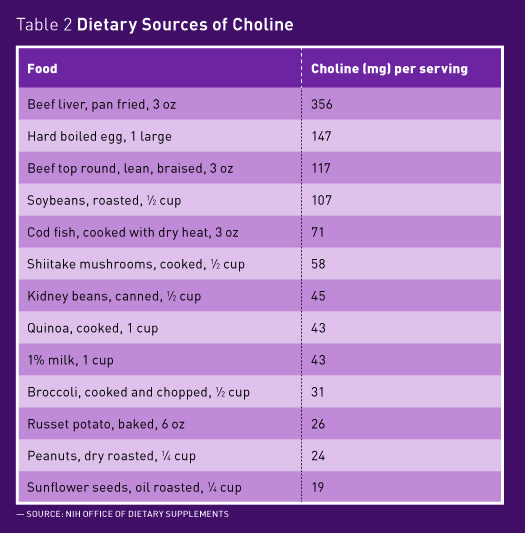 Choline is important to development before birth and throughout the entire life cycle. Unfortunately, recent National Health and Nutrition Examination Survey data suggest that a mere 8% of adults meet or exceed the Adequate Intake (AI) for choline.2 Because few foods are good sources of this essential nutrient, supplements may be necessary.

Moreover, choline is a precursor to acetylcholine, a neurotransmitter and nonneuronal cell signaling compound involved in muscle control, memory, mood, and other nervous system functions.   As a major dietary source of methyl groups, choline plays a role in gene expression, cell membrane signaling, stabilization of DNA, homocysteine reduction, detoxification, and lipid transport and metabolism.   Folate also is a major source of methyl groups, so folate status impacts choline requirements and vice versa. If one of these nutrients is low, the dietary requirement for the other is increased. Common genetic polymorphisms in folate and choline metabolizing genes alter the metabolic use of choline in ways that increase the demand for dietary choline.

The research is limited, but one cohort study involving 647 men and 744 women between the ages of 36-83, did find that a higher choline intake was related to better memory performance.

In this study, the principal findings show that better memory performance is related to a higher concurrent choline intake (exam 7), whereas remote choline intake (exam 5) is associated with a significant inverse relation to larger WMH in a large, nondemented, community-based population.

The neurotransmitter acetylcholine is intricately connected with the cholinergic neural networks associated with memory  and is synthesized from choline and acetyl-CoA through the action of choline acetyltransferase. Neurons obtain choline from 2 sources: uptake from serum choline mainly derived from dietary intake and de novo synthesis. The loss of cholinergic neurons and choline acetyltransferase activity is consistent with abnormalities in AD and is thought to contribute to the learning and memory deficits associated with AD. Adequate concentrations of choline in the brain are believed to protect against age-related cognitive decline and certain types of dementia, including AD  because adequate concentrations potentially preserve neurons, brain volume, and neuronal transmissions.


However, it is often grouped with the vitamin B complex due to its similarities. In fact, this nutrient affects a number of vital bodily functions.    Choline is involved in many different processes, such as cell structure and messaging, fat transport and metabolism, DNA synthesis and nervous system maintenance.

Dietary sources are generally in the form of phosphatidylcholine from lecithin, a type of fat.  Rich food sources of choline include beef liver, eggs, fish, nuts, cauliflower and broccoli. Choline can also be taken as a supplement, of which CDP-choline and alpha-GPC seem to be the best types.

The richest dietary sources of choline include (21):

As a single egg supplies about 20–25% of your daily requirement, two large eggs provide almost half (22).

Out of all the organs, liver is by far the most nutritious.

The liver is a remarkable organ with hundreds of functions related to metabolism. One of its functions is to store important nutrients for the rest of your body.


Small, oily fish like sardines are usually eaten whole, giving you the organs, bones, brain and other nutritious parts.

They contain a little bit of almost every nutrient you need.    Blueberries – Although not as high — calorie for calorie — in vitamins and minerals as vegetables, they’re packed with antioxidants.  They are loaded with powerful antioxidant substances, including anthocyanins and various other plant compounds, some of which can cross the blood-brain barrier and exert protective effects on your brain.

Vitamin D is an essential nutrient with many important functions.   Also called the sunshine vitamin, vitamin D doesn’t have to come from your diet.    Your skin can produce it when it’s exposed to sunlight. However, if your sunlight exposure is limited or you live far from the equator, you must get it from food or supplements.

The best sources of vitamin D3 are fatty fish and egg yolks. Other sources include supplements, cod liver oil, or enriched foods like milk or cereals.

As the main dietary sources of vitamin D3 are not plant-based, vegetarians and vegans may be at a higher risk of deficiency, especially during the winter in countries north or south of the equator.

Deficiency in vitamin D is linked to an increased risk of various adverse conditions, including: