A parent warned his children not to look out of the window and told his wife to put the volume on the TV louder. He didn’t want them to see the horror that was unfolding in broad daylight.     These are the words of a Durban father, who described the harrowing scenes that played out in full view as he looked out of his window and saw two men being beheaded on Taurus Street in Shallcross, south of Durban.     The KZN organised crime unit has now taken over investigations into the murder of suspected Durban drug kingpin Yaganathan Pillay 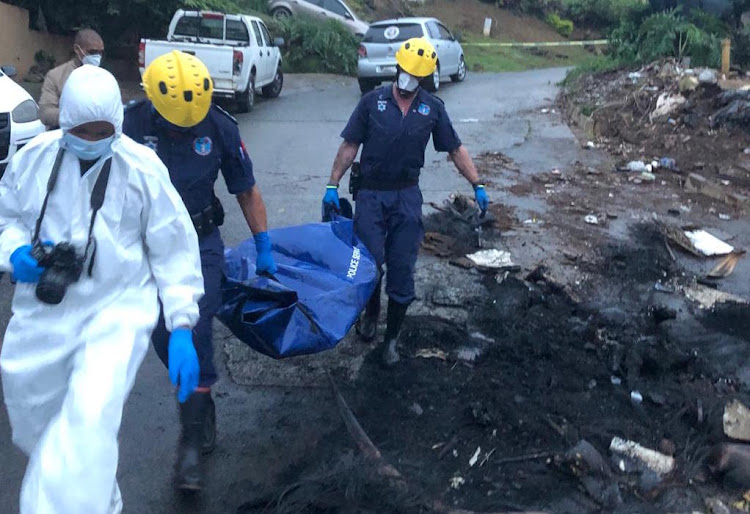 Members of the KwaZulu-Natal organised crime unit have taken over investigations into the murder of suspected Durban drug kingpin Yaganathan Pillay, more commonly known as Teddy Mafia.   The specialised unit will also investigate the murder of the two men who are alleged to have gunned down Pillay before they were shot, decapitated and their bodies burnt by an angry mob on Taurus Street in Shallcross, south of Durban, on Monday.

There are various leads that they are working on and it is looking quite positive at this stage.

“A case of public violence will be investigated by police and not organised crime after members of SAPS were blockaded and prevented from getting into the area .

Pillay was gunned down in his Shallcross home by two men, who it is believed he knew, about 2pm on Monday. It is understood that he was shot twice in the head and succumbed to his injuries shortly after being transported to Chatsmed hospital in Chatsworth.

*
Detectives have returned to the Shallcross home of suspected drug lord Yaganathan “Teddy Mafia” Pillay. He was shot in the head and killed 5 January 2020.
https://twitter.com/DasenThathiah/status/1346439981934530560

On 30 October 2020 it was reported that Simone Jasmin was gunned down on the Bluff, there was an outpouring of jubilation and grief in equal parts in Wentworth, south of Durban, where she is said to have run one the most ruthless drugs gangs in the city.    For people outside of Durban’s violent drug underbelly who heard of her for the first time, her murder carried a fascination with the obvious question, how did a woman rise to the apex of a violent drug gang?

Jasmin, known as Moni on the streets of Wentworth, was introduced to the gang life by a boyfriend, police and community sources who spoke to IOL on condition of anonymity said.    One of her nicknames was Queen of the South, a popular Mexican telenovela which many observers said mimicked the 35-year-old’s life.    Jasmin’s life bears striking similarities to the main character in Queen of the South, Teresa Mendoza, who comes from a poor background and falls in love with a member of a drug cartel.    After falling in love with a drug dealer from a Wentworth gang who was later murdered, Jasmin began dealing in drugs, just like Mendoza.