Pragtige en unieke foto’s asook “drone” beeldmateriaal van die haai wat so naby is.
The footage was captured in Cape Town. The National Sea Rescue Institute (NSRI) has issued a warning to all sea lovers to be cautious when in the water. 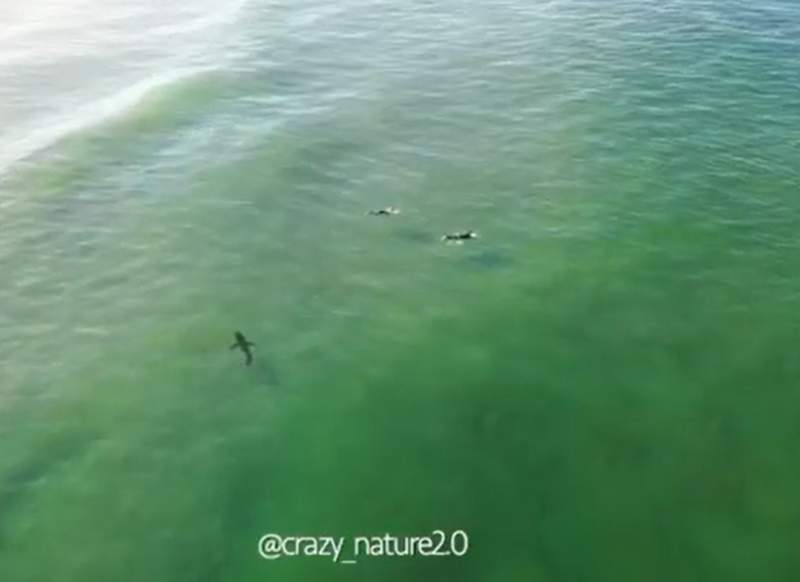 Drone footage, taken by 14-year-old Zach B, of a large great white shark in close proximity to surfers in Plettenberg Bay on Tuesday has gone viral.

The initial video, which has more than 72,000 views, depicts the incredible beauty of a great white shark. Surfers can be seen meters away from the massive beast, who merely swims around whilst the surfers swim away.

I have been filming the sharks all of lockdown but have never and didn’t think I would ever witness anything like this. Although I urge all surfers and swimmers to be careful I think this footage shows the calm and beauty of these incredible animals.

Once the dust has settled I have plenty more footage to share with everyone. I hope you all come along for the journey.

Speechless! I can’t begin to explain the rush of emotions while flying my drone during this encounter. Witnessing what was going on my screen while frantically making my way down to the beach to warn the surfers made for a pretty crazy afternoon for young old me. I have been filming the sharks all of lockdown but have never and didn’t think I would ever witness anything like this. Although I urge all surfers and swimmers to be careful I think this footage shows the calm and beauty of these incredible animals. Once the dust has settled I have plenty more footage to share with everyone. I hope you all come along for the journey. #discovery #natgeo #sharkweek

In the second video, which was released 24 hours later, the great white shark was spotted again circling around surfers. According to Zach B’s post on Instagram, NSRI was immediately notified and all surfers exited the water safely.

The predator – estimated over three metres in length – cruised in among the six surfers and a lone kayaker who had no idea that a lethal attack could be just seconds away.

The remarkable drone footage taken in Plettenberg Bay, South Africa, was filmed by Zachary Berman, 14, who was on the beach with his father.

“We normally fly the drone to capture nature and I was monitoring the shark to see how close it got to the surfers and when I saw it was heading towards them informed my dad to get them out the water,” said Zachary. 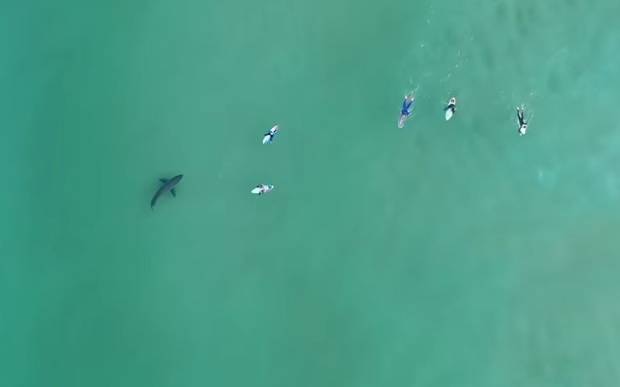 “He was on his way to get them out and by then the shark was moving quite fast. When the shark goes underneath the boards Sea Rescue hadn’t arrived yet. It was really scary standing there with the remote control watching this shark head towards the surfers. You don’t really know what to do in that situation.”

The great white goes undetected by the surfers for 25 seconds until a kayaker in a green canoe appears to spot it and suddenly realises it’s right beneath them and alerts the others.

A man on a surfboard, whose legs are just a couple of metres from the jaws of the shark, suddenly paddles furiously away.

The kayaker seems to bravely put his canoe between the great white and his surfer mate to give him a few vital seconds to get away and then turns and paddles off himself.

The surfer catches a wave to take him safely away from the shark which casually turns away from what could have been an easy meal and glides away but then turns and comes back.

As the warning shouts reach the other surfers they too paddle for the beach and alert the life savers who cleared the beach, ordering everyone out the water.

Plettenberg Bay is just 160km up the coast from Jeffrey’s Bay where professional surfer Mick Fanning had a near miss with a great white in July 2015 at the J-Bay Open surf event. On that day Fanning was also lucky enough to paddle away before anything terrible happened.

National Sea Rescue Institute press spokesman Craig Lambinon said they were appealing to all surfers, paddle boarders and bathers to be on full alert for great white sharks.

“The increase of sharks at this time of the year is part of the normal aggregation of these animals that take advantage of natural prey like seals and fish coming close in shore,” he said.

“The behaviour seen in this drone footage shows the shark is aware of the surfers and is investigating the surfers,” she said.

“It is important for people to remember that great white sharks are naturally inquisitive Apex predators and that although shark bites are rare, water users must understand the inherent risk associated with sharing the ocean with these animals.”

In the past 10 years there have been 12 people attacked and killed in shark attacks in South Africa with five by great whites, four by bull sharks, one by a tiger shark and two by unknown sharks.

There is an average of six shark attacks a year in South Africa with 15 per cent proving fatal and the main culprit is the biggest of them all – the great white, of which there are thought to be 300 to 500 along the coast.

In 2011 Tim van Heerden, 49, was killed by a 2.4 metre great white at the Keurboom River Mouth, Western Province, after being pulled off his surf board twice suffering horrific injuries and dying later in hospital.

The year before Lloyd Skinner, 37, was attacked by a great white at Fish Hoek in the Western Province while swimming in chest deep water and was dragged out to sea after being bitten several times.

In 2012 David Lilienfield, 20, was attacked while on his body board in False Bay, Western Province by a 4.5 metre great white and despite being rescued, he died from his injuries.