Iranians, Canadians, Ukrainians, Swedes, Afghans, Germans and Britons killed in crash.    It is reported that an Ukrainian Boeing 737-800 had suffered an engine malfunction before it went down a few minutes after taking off from Tehran’s Imam Khomeini airport, an airport official has said.    The engine caught fire when the plane was airborne, Ali Khashani, a senior public relations official at Iran’s major airport, was quoted by local media. The fatal engine failure is thought to have caused the jet to come down, between the cities of Sharhiar and Parand in the early hours of Wednesday. 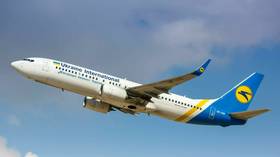 The airliner, operated by Ukraine International Airlines (UIA), carried 176 passengers and nine crew, most of whom were Iranians, according to Reza Jafarzadeh, a spokesman for Iran’s Civil Aviation Organization.

Meanwhile, Ukraine’s diplomatic mission in Iran said later on Wednesday that “any statements regarding the causes of the accident prior to the decision of the [investigative] commission are not official.”

A Ukrainian Boeing 737-800 had suffered an engine malfunction before it went down a few minutes after taking off from Tehran’s Imam Khomeini airport, its official has said. The airliner, operated by Ukraine International Airlines (UIA), carried 167 passengers and nine crew, most of whom were Iranians, according to Reza Jafarzadeh, a spokesman for Iran’s Civil Aviation Organization.

Sincere condolence to the families of those on this flight

“The plane crashed five minutes after taking off,” said civil aviation spokesman Reza Jafarzadeh. “The pilot had no contact with the tower and didn’t announce an emergency situation before the crash.”

The Boeing 737-800 operated by Ukrainian International Airlines took off from Imam Khomeini international airport at 6.12am Tehran time on Wednesday, after being delayed by almost an hour. It took off to the west, but never made it above 8,000 ft and went down about 10 minutes later, according to flight-tracking websites.

There were no early indications the crash was linked to Wednesday morning’s missile strikes on bases in Iraq hosting US and coalition troops. Both Ukrainian and Iranian officials said they suspected a mechanical issue had brought down the plane.

A video purportedly of the crash circulated by Isna showed the aircraft burning as it fell from the sky.

The 737-800 belongs to the same family as, but is different to, the 737 Max 8 aircraft, which has been grounded since two fatal crashes occurred within six months in Indonesia and Ethiopia. The 737-800 operates with a different software system to the one implicated in the Max 8 crashes.

An investigation team was now at the site of the crash on the south-western outskirts of Tehran, Jafarzadeh said. “After taking off from Imam Khomeini international airport, it crashed between Parand and Shahriar.” Jafarzadeh said.

Qassem Biniaz, a spokesman for Iran’s road and transportation ministry, told the state-run Irna news agency that it appeared the pilot had lost control after a fire struck one of the plane’s engines.

Hassan Rezaeifar, the head of air crash investigation committee, said it appeared the pilot couldn’t communicate with air-traffic controllers in Tehran in the last moments of the flight. He did not provide further details.

Ukrainian authorities have offered to help with the investigation. “Our task is to establish the cause of the crash of the Boeing and provide all necessary help to the families of the victims,” Ukraine’s parliament speaker, Dmytro Razumkov, said in a statement on Facebook.

President Volodymyr Zelenskiy cut short a visit to Oman and offered his condolences to those affected.

Journalists from Associated Press, who reached the crash site on Wednesday morning, described farmland covered with debris. The dead laying among shattered pieces of the aircraft. Their possessions, a child’s electric toothbrush, a stuffed animal, luggage and electronics, stretched everywhere.

The only thing that the pilot managed to do was steer the plane towards a soccer field near here instead of a residential area back there, witness Aref Geravand told AP. “It crashed near the field and in a water canal.”

Boeing, like other airline manufacturers, typically assists in crash investigations. However, that effort in this case could be affected by the US sanctions campaign in place since Donald Trump unilaterally withdrew from Tehran’s nuclear deal with world powers in May 2018.

The US’s largest manufacturing exporter has struggled to regain public trust after its 737 Max plane was involved in the two crashes that killed 346 people.

The company has faced intense scrutiny, including allegations that it was aware of problems with a new automatic flight control feature on the 737 Max, which investigators believe is likely to have been the cause of the crashes.

Last month, the company fired its chief executive, Dennis Muilenburg, who had been widely criticised by families and regulators for his handling of the crisis. Muilenburg was accused of a lack of sensitivity and respect towards bereaved families, as well appearing to mislead the aviation regulator.