Poland’s parliament  passed a law punishing judges critical of controversial court reforms, a measure the governing conservatives say is necessary to avoid judicial chaos but that the opposition calls a threat to the rule of law.  The vote came just a few hours after the European Commission called on Warsaw to put off on approving the draft law until it had consulted with international experts. 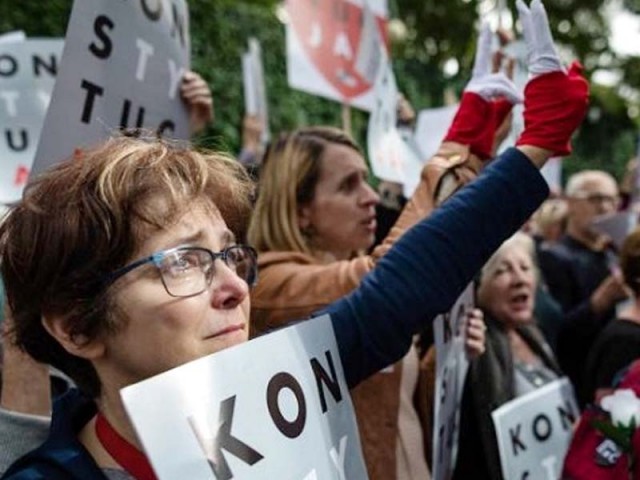 The legislation passed the lower house of parliament with 233 votes in favour, 205 against and 10 abstentions.

It was prepared in haste by the governing right-wing Law and Justice (PiS) party in response to rulings by the European Court of Justice (CJEU) and the Polish Supreme Court, which called into question various judicial reforms introduced by the conservatives.

“This law protects the democratic rule of law against the ‘judiocracy’ that some are trying to usher in through a trapdoor, triggering chaos, anarchy and illegality,” he said.

After it was introduced, critics said the bill put judicial independence at risk and it triggered street protests across the country. Judicial experts in parliament also called the legislation into question.

The document was amended but according to the approved version judges could still lose their jobs for challenging the competence of magistrates appointed by a body which opponents say lacks independence.

She called on Poland to first consult the Council of Europe’s Venice Commission — which advises countries on bringing their laws into line with EU requirements — about the proposed legislation.

Jourova wrote a letter to the Polish president, prime minister and parliamentary speakers to set out the EU’s concerns.

“(She) invites all state organs not to take forward the proceedings on the new draft legislation before carrying out all the necessary consultations with all stakeholders,” Commission spokesperson Christian Wiegand told reporters.

The spokesperson for the United Nations (UN) human rights office, Rupert Colville, also on Friday expressed “concern” over the draft legislation, which he said “risks further jeopardising the independence of the judiciary in Poland.”

Poland’s Ombudsman Adam Bodnar for his part said the draft act “violates the Constitution and the ground rules of the rule of law.”

The document “would definitively put Polish courts and judges under the control of the legislative and executive branches of government,” Bodnar added.

On Wednesday, thousands of Poles protested against the bill in around 100 cities across the country.

The Supreme Court  warned the proposed rules would “very likely” lead to Poland being punished by the EU for failing to respect its treaty commitments.

If the government refused to back down, the country could eventually have to leave the bloc, it added in the 40-page statement.

The senate still needs to approve the legislation for it to come into force.