The Russian Royal Family was executed and buried in July 1918. So why does Vladimir Putin keep bringing up the bodies? 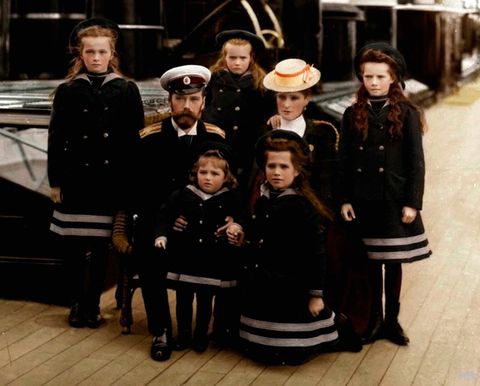 As a Romanov historian who has spent the last 12 years writing about Russia’s last Imperial Family, I have lost track of the number of letters and emails I have received from people claiming to be related in some way to a member of that illustrious family, or whose ancestor was involved in their miraculous escape from Russia. They just keep on coming.

The problem with Russian ancestry is that, after the 1917 Revolution forced many of them into exile, there was a whole diaspora of largely impoverished Romanov princess, princesses, grand dukes and duchesses. Many of them spelled the name in the Frenchified form as Romanoff.

(This in fact more closely mirrors the correct Russian pronunciation than the -ov ending that is favored now.) In exile in Paris, the South of France, London and California, expatriate Romanoffs of one kind or another dined out on the name.

At about 1 a.m. on July 17, 1918, in a fortified mansion in the town of Ekaterinburg, in the Ural Mountains, the Romanovs—ex-tsar Nicholas II, ex-tsarina Alexandra, their five children, and their four remaining servants, including the loyal family doctor, Eugene Botkin—were awoken by their Bolshevik captors and told they must dress and gather their belongings for a swift nocturnal departure.

The White armies, which supported the tsar, were approaching; the prisoners could already hear the boom of the big guns. They gathered in the cellar of the mansion, standing together almost as if they were posing for a family portrait. Alexandra, who was sick, asked for a chair, and Nicholas asked for another one for his only son, 13-year-old Alexei. Two were brought down. They waited there until, suddenly, 11 or 12 heavily armed men filed ominously into the room.

What happened next—the slaughter of the family and servants—was one of the seminal events of the 20th century, a wanton massacre that shocked the world and still inspires a terrible fascination today. A 300-year-old imperial dynasty, one marked by periods of glorious achievement as well as staggering hubris and ineptitude, was swiftly brought to an end. But while the Romanovs’ political reign was over, the story of the line’s last ruler and his family was most certainly not.

For the better part of the 20th century the bodies of the victims lay in two unmarked graves, the locations of which were kept secret by Soviet leaders. In 1979 amateur historians discovered the remains of Nicholas, Alexandra, and three daughters (Olga, Tatiana, and Anastasia). In 1991, after the collapse of the Soviet Union, the graves were reopened and the identities of the interred confirmed by DNA testing. In a ceremony in 1998 attended by Russian president Boris Yeltsin and 50 or so Romanov relatives, the remains were reburied in the family crypt in St. Petersburg. When the partial remains of two skeletons believed to be the remaining Romanov children, Alexei and Maria, were found in 2007 and similarly tested, most people assumed they would be reburied there as well.

On July 17, 1918, Anastasia Romanov, holding her dog Jimmy, followed the family down the steps to the terrible cellar in Yekaterinburg, where they were told to wait. The White Army was nearing their location, desperate to free the czar.

Suddenly the executioners strode in. The family and their servants, arrayed against the far wall, were gunned down by about a dozen men. Anastasia, who had just turned 17, was among the last to die, according to later testimony from the Bolshevik firing squad. Nor did the killers spare her pet. They crushed the dog’s head with a rifle butt and tossed him into the truck with the dead. The bodies of the family and their retainers were disfigured, mutilated, and either burned or buried in the forest.

For 300 years the Romanovs ruled Russia as tsars. But as World War I brought Russia to revolution, Tsar Nicholas II and his family were overthrown. During his World Cup tour of Russia, National Geographic reporter Sergey Gordeev visits the Church on the Blood in Yekaterinburg that memorializes the location of their demise.
https://www.youtube.com/watch?v=IrqZ93r7lzk
*

The Last Memories Of The Last Imperial Family Of Russia
https://www.youtube.com/watch?v=Dby-5tcURao

Mystery of the Romanovs

*
Search of a lost princess

Popular belief has, until recently, been that Anastasia Romanov and her young brother Alexei escaped the assassination when the rest of the Russian Imperial Family was murdered during the Russian Revolution. The reason was, that there where always 2 bodies missing.

Today, people are coming to believe that because the 2 ‘missing bodies’ had been ‘located’, the whole of the Romanov family were killed. The Russians authorities claim conclusively that that those two missing bodies have been proven, by DNA testing, to be Maria and Alexei.Case closed! We dispute that claim on several grounds. Why?
When the Tzar and his family were slaughter by the Bolshivics. He was the richest man in the world.

His death meant his fortune went to the State, the USSR, the Union of Soviet Socialist Republics, the USSR. The country today known as Russia. There is no way Russia is going to entertain any claim against that fortune. The easiest way to stop any potential claim is for the world believe that no heir survived. They say the DNA testing was confirmed by international experts. But these experts only had material to work with that the Russian authorities supplied.

Also the Russian authorities do not have a good track record when it comes to telling the truth. Just look at history and the events of today. In our story the grandchildren of a woman living in South African claimed that their deceased grandmother was the Grand Duchess of Russia. She was presumed to be Anastasia.

They claimed she escaped and lived out her life in fear and hiding as a commoner in South Africa. After exhuming the woman’s remains from a secret grave, we took the remains to four universities including Oxford University in England, to test their claim. Astonishingly the results concluded that is was not Anastasia who escaped the revolutionaries’ bullets but her sister Maria. Which is interesting because since this documentary was first aired on National Geographic the Russian authorities say the missing daughter was Maria – but that she was dead and found in a grave with Alexei, as mentioned above. Convenient. Watch the documentary, weigh up the evidence presented in it and then think about how trustworthy the Russian authorities with so much to lose if we were right. A multi award winning documentary. Also worth considering this comment by 13minutestomidnight “I’m just going to copy my previous answer to this statement. Again: conclusive DNA analysis is impossible on badly chemically and fire damaged bones buried 90 years ago.
The bones might be the Romanovs or they might not be, but it would be impossible to determine by DNA analysis due to the high risk of cross-contamination – particularly from the nearby Romanov mass-grave – and DNA degradation.
Remember, this documentary just showed that complete, whole untouched bones laid in a single grave 30 years ago were already at such high risk for contamination that one per-eminent University wouldn’t touch them and Oxford found completely different DNA results for the skull and bones. If someone had tried to use a DNA analysis of 90-year old mixed bones piled into the same grave and badly chemically and fire damaged in their thesis at my old medical school they would have been failed. How the Americans and Russians got away with it in the media staggers me. Oh, and this was back in 2007, so no, there was no revolutionary DNA testing advancements that would have made this practicable.” If you like the music in the opening of this documentary just follow this link and you can download the mp3 file. Enjoy.