This is not only a dream, but various places on earth show what have been done on rehabilitation of ecosystems.  A main component of desert greening is the planting of trees.  Trees store water, raise water from underlying aquifers, reduce evaporation after a rain, attract animals (and thereby fertility through feces), and they can cause more rain to fall (by temperature reduction and other effects), if the planted area is large enough.   Various solutions. 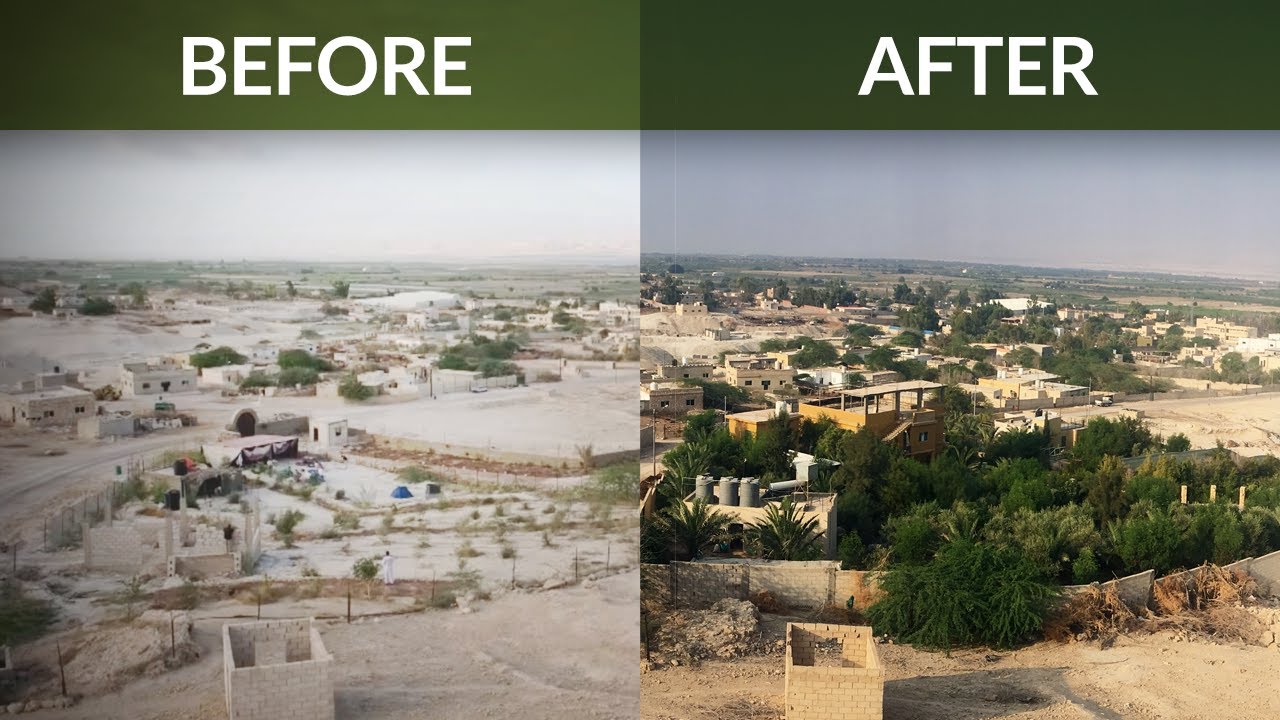 Desert greening is the process of man-made reclamation of deserts for ecological reasons (biodiversity), farming and forestry, but also for reclamation of natural water systems and other ecological systems that support life. The term “desert greening” is intended to apply to both cold and hot arid and semi-arid deserts .  Water can be made available through saving, reuse, rainwater harvesting, desalination, or direct use of seawater for salt-loving plants. These different paths have unique features, i.e.: conserving water is a cheap solution.

This World Bank/TerrAfrica documentary showcases Ethiopia’s success in sustainable land and water management. It highlights how a landscape approach was used to manage land, water and forest resources to meet the goals of food security and inclusive green growth. The lessons drawn are relevant for other countries in the region and other parts of the world fighting land degradation and climate change issues. 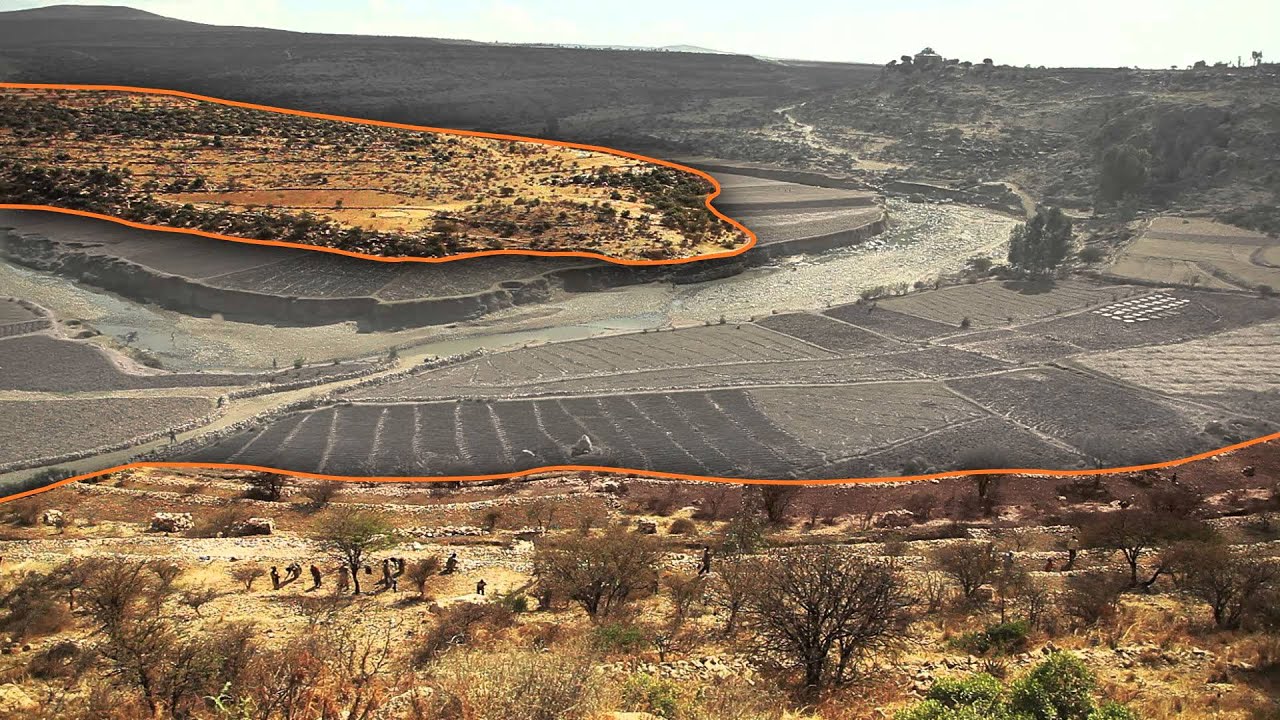 Mark Leisher Production was hired by Trees For The Future to travel to Ethiopia and document the tree planting efforts in the Silte Zone of Southern Ethiopia. During the 10 days we traveled over 2000 kilometers and still made it back every night to the capital of Ethiopia, Addis Ababa.
https://www.youtube.com/watch?v=ZMFbUEz9CAw

For more than 15 years, cameraman and ecologist John D. Liu has been working on his worldwide mission to green deserts and to restore biodiversity. It all started in 1995 when Liu filmed the Loess-plateau in China. He witnessed a local population who turned an area of almost the same size as The Netherlands from a dry, exhausted wasteland into one green oasis. This experience changed his life. From that moment on, Liu has been travelling all over the world to convince and inspire government leaders, policy-makers and farmers with his film material and knowledge. Liu diligently spreads the message that restoration of ecosystems is not only possible, but also economically very meaningful. Backlight accompanies Liu on his mission in Jordan and shows on the basis of Liu’s own film material that a green future is possible worldwide.

The thing is that, once people like Dr. Liu prevent the world from turning to dust, humanity then needs to put an end to desertification, once and for all. Drought has led to famine for millennia and the time has come to end world hunger.

Food and water security is the most important thing in the world, and it always will be. Scarcity can become a thing of the past though, but everyone has to work together to make it happen. Fortunately, there are easy steps to follow in the regreening algorithm. To begin with, work needs to be done in every place that doesn’t stay humid all year round.

Every area in the world that has dried up, or is drying out, must be fenced in. Overgrazing leads to exposed ground, which leads to damaged soil, which contributes to climate change. This does so by releasing carbon and more importantly dihydrogen monoxide, or water, into the atmosphere. The same problem is also caused by slash and burn style farming. Improper herding and farming are detrimental, so everything has to be managed properly to avoid any further damage.

In summation, once most of the soil covering the planet has been turned to grassland, then most of that needs to be turned into farmland. This will require the use of holistic planned grazing and harvesting. Then, in most cases, the sustainable growth of vegetation can be made to occur in a number of different ways. Ideally, though, the goal in all of this is to have Mother Earth grow our food, not Monsanto  (SOROS). To do this, permaculture farming emphasizes patterns of landscape and species assemblies, such as corn, beans, and squash which should always be grown together, not as separate crops. This provides the maximum benefit to the local environment and produces a high density of goods at a minimal cost. So, it really is possible to turn every brown wasteland into a green oasis, no matter how big or small they might be. As a perfect example, the Loess Plateau restoration project, which is pictured below, is proof positive that this can happen, even on a really large scale.

*
Excerpted from Allan Savory’s presentation on January 25, 2013 at Tufts University’s Fletcher School, this segment highlights examples of how Holistic Management restores grasslands from land that’s degraded to desert. This innovative, natural, and simple idea mimics Nature by using careful management of livestock to stimulate the regrowth of grasses, animals, and puts large amount of greenhouse gases (GHG’s) from the air into the soil. Event sponsored by The Center for International Environment and Resource Policy (CIERP) at the Fletcher School at Tufts University, the The Friedman School of Nutrition at Tufts University, and Planet-TECH Associates of Somerville, MA. Videography provided by Local Flavor LLC.

Summary of the method for those confused by the video, it “mimics nature” like the million animal herds of the Serengeti but with livestock. Because of the amount of manure & trampling in such big herds, the animals keep moving. This system moves the animals daily, but keeps them in as small an area as possible while giving enough food for the day. That means as much manure as possible & as much liquid as possible in the form of livestock urine. After one day’s grazing, the fertiliser is allowed to do it’s thing & stimulate plant growth. The animals only return to that ground once the plants are fully grown & therefore at maximum nutritional value – imagine eating wheatgrass v fully grown wheat plants, complete with wheat grain. Most farms let the animals graze at will, creating a wheatgrass situation, this system allows the plants to grow beyond baby stage & produce heavy duty food! (and root length matches plant height, which means an end to erosion & water run off too). On ground with NOTHING growing, they lock the animals onto that ground each night, as tightly backed as possible for a week or so, then move them out to better land for food each morning. The nightly urine & manure means a thick slurry of microbial life, breaking of the surface crust & lots of moisture to stimulate any seeds in the ground & manure into germinating. That new grass is allowed to fully mature before the animals return to eat it & refertiliser.
*

“Desertification is a fancy word for land that is turning to desert,” states Allan Savory in his quiet but inspirational form. And it’s happening to about two-thirds of the world’s grasslands, accelerating climate change and causing traditional grazing societies to descend into social chaos. Savory has devoted his life to stopping it. He now believes, and his work so far shows, that a surprising factor can protect grasslands and even reclaim degraded land that was once desert. The role of livestock in a new agriculture that can save city-based civilization. Allan discusses how animals, such as sheep, can be used to heal landscapes, combat climate change, restore economies, increase soil fertility, produce clean water, provide healthy habitat for wildlife, and more.

This video examines the wastewater treatment process in Anne Arundel County, where plants meet or exceed standards for pollutant removal. Take a look at how it works, and how you can contribute to a healthy environment.