Is not going to disappear “uncles tiger and darkness”…   Makgatho told Sunday World she broke up with Mboweni because he was a “control freak”.     The soap opera doesn’t end there and it will go on.   Mantashe claims that he paid two Sunday World journalists R70,000 not to run with the story.      Sunday World editor and publisher Makhudu Sefara has urged Mantashe to name and shame the two journalists – and provide some receipts too.  On the other side of darkness,  Tito Mboweni’s switched off his lights. 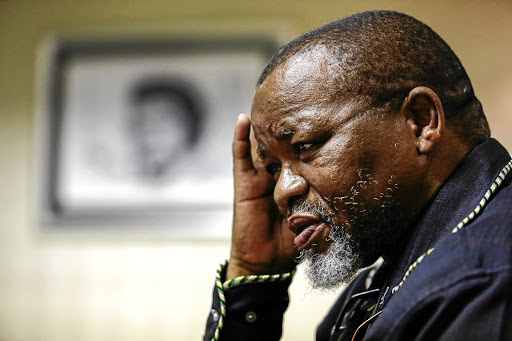 …. It’s alleged that Mantashe admitted to paying journalists a total of R70 000 in order to make the expose disappear. Further allegations claim that Mantashe was caught in a ‘political love triangle’ with Finance Minister Tito Mboweni. It’s been reported that both ministers were having an affair with Lerato Habiba Makgatho, who later bragged about the attention she was receiving.
Gwede Mantashe – Lerato Habiba Makgatho – Tito Mboweni

According to the Chinese zodiac, 2019 is the “year of the pig”, but in Mzansi, it’s clearly the year of the tiger.    “Gwede must choose whether he wants to be a tiger or minister. He can’t hold two positions while unemployment is so high,” @Mmadikgosi_23 opined.   “Now I see why Gwede Mantashe named his dog tiger…” @G_Manchidi joked.
According to a news report by Sunday World, mineral resources minister is “a tiger in bed” after allegedly giving Pretoria slay queen Lerato Makgatho a night to remember.   There are receipts too, in the form of WhatsApp messages between the two and they are very explicit.    Finance minister Tito Mboweni is also dragged into this mess as he also reportedly had a romantic relationship with Makgatho.

The story was published as the newspaper’s lead anyway, with Mantashe reportedly saying the journalist who contacted him was the “third person” who wanted to run with it, and that he refused to pay again.   He told the publication that he “begged” for the story not to be written.   The story details how Mantashe, who is married, was a “tiger in bed” who allegedly gave 26-year-old student and aspiring actress Lerato Makgatho payments of R10,000 – R15,000 at a time, and complained when approached for more money that he had already forked out R70,000 in total.

Minister @GwedeMantashe1 just admitted to bribery of @SundayWorldZA journalists not to publish his “Tiger” story. I really don’t care much on the private life of the man. What should concern us is bribery of journalists. He must hand himself to the police & release the names! pic.twitter.com/fParWFA3hM

Minerals and energy minister Gwede Mantashe allegedly admitted to the Sunday World newspaper that he paid two journalists to “destroy evidence” about an alleged extra-marital affair he had with a student. Here’s everything you need to know.

Minerals and Energy Minister, Gwede Mantashe’s in hot water. There are growing calls that he be investigated on multiple fronts for reportedly admitting to bribing two Sunday World journalists