After 18 years of war, thousands of lives lost, and hundreds of billions of dollars squandered, the United States accomplished precisely nothing.    From 1996 to 2001, the Taliban held power over roughly three quarters of Afghanistan, and enforced there a strict interpretation of Sharia, or Islamic law. The Taliban emerged in 1994 as one of the prominent factions in the Afghan Civil War   and largely consisted of students (talib) from the Pashtun areas of eastern and southern Afghanistan who had been educated in traditional Islamic schools, and fought during the Soviet–Afghan War.

Protesters took to the streets after the Taliban attack… 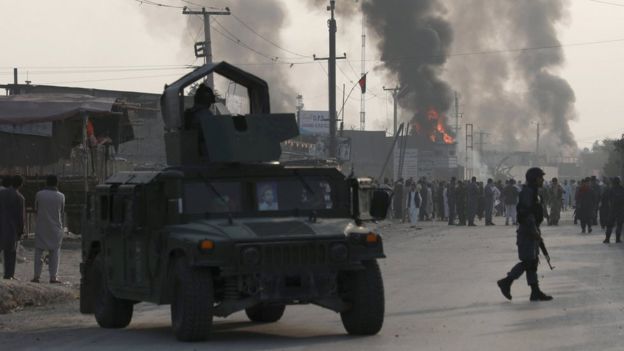 *
The Soviet–Afghan War lasted over nine years, from December 1979 to February 1989. Insurgent groups known collectively as the mujahideen, as well as smaller Maoist groups, fought a guerrilla war against the Soviet Army and the Democratic Republic of Afghanistan government, mostly in the rural countryside.

The mujahideen groups were backed primarily by the United States, Saudi Arabia, and Pakistan, making it a Cold War proxy war. Between 562,000 and 2,000,000 civilians were killed and millions of Afghans fled the country as refugees,  mostly to Pakistan and Iran.  The war derives from a 1978 coup when Afghanistan’s communist party took power, initiating a series of radical modernization reforms throughout the country. These reforms were deeply unpopular among the more traditional rural population and established power structures.

In January 1980, foreign ministers from 34 nations of the Islamic Conference adopted a resolution demanding “the immediate, urgent and unconditional withdrawal of Soviet troops” from Afghanistan

Afghanistan has been back in the news lately, but most commentators are missing the big picture. In recent weeks there has been a raft of articles suggesting the United States and the Taliban were nearing a peace deal that would enable the United States to withdraw most, if not all, of its forces there.

These rumors prompted immediate warnings from skeptics such as retired Gen. David Petraeus, who failed to win the war on his watch but wants his successors to keep trying, and assorted other hawks who want America’s longest war to continue and still think victory is achievable.

The United States would withdraw 5,400 troops from Afghanistan within 20 weeks as part of a deal “in principle” with Taliban militants, Washington’s top negotiator has said.

Zalmay Khalilzad revealed details of the long-awaited deal for the first time in a TV interview after briefing Afghan leaders on the agreement.

But he said final approval still rested with US President Donald Trump.

A huge blast rocked Kabul as the interview aired.

The Taliban said it was behind the attack, which used a bomb strapped to a tractor to kill at least 16 people and injure at least another 119.

The target was a residential compound housing foreigners, just outside the city’s heavily-fortified Green Zone.

However, it was Afghan civilians who paid the highest price. By morning, about 400 foreigners had been escorted out of the area as anger bubbled over onto the streets. Locals set fire to tyres and blocked a main road, demanding foreigners leave the area for good.

“This is not the first time we suffer because of them,” resident Abdul Jamil told news agency AFP. “We don’t want them here any more.”

The attack – the third in as many days – highlights fears that US negotiations with the Taliban won’t end the daily violence in Afghanistan and its terrible toll on civilians.

The militants now control more territory than at any time since the 2001 US invasion and have so far refused to talk to the Afghan government, whom they deride as American puppets.

Ejaz Malikzada, a researcher at the Afghan Institute for Strategic Studies in Kabul, told the BBC he had little hope of change.

“They say: ‘we’ll fight even if we sign an agreement with the Americans we’ll keep fighting and we’ll kill, no matter what’. So the Taliban have not changed, the only change that I can see is their bombs have got bigger.”

In exchange for the US troop withdrawal, the Taliban would ensure that Afghanistan would never again be used as a base for militant groups seeking to attack the US and its allies.

“We have agreed that if the conditions proceed according to the agreement, we will leave within 135 days five bases in which we are present now,” Mr Khalilzad said.

The US currently has about 14,000 troops in the country.

A Taliban spokesman confirmed in a text message to the BBC that the details of the troop withdrawal as outlined by Mr Khalilzad were correct.

A pullout of the remaining forces would depend on conditions, including the start of peace talks between the Afghan government and the Taliban as well as a ceasefire, reports the BBC’s Lyse Doucet from Kabul.

Afghan President Ashraf Ghani will study the deal before giving any opinion, his spokesman Sediq Sediqqi said earlier on Monday. He said the government still needed proof the Taliban were committed to peace.

Many in Afghanistan fear that a US-Taliban deal could see hard-won rights and freedoms eroded. The militants enforced strict religious laws and treated women brutally under their rule from 1996 to 2001.

What’s the background to the Afghan war?

It began when the US launched air strikes one month following the 11 September 2001 attacks and after the Taliban had refused to hand over the man behind them, Osama Bin Laden.

The US was joined by an international coalition and the Taliban were quickly removed from power. However, they turned into an insurgent force and continued deadly attacks, destabilising subsequent Afghan governments.

The international coalition ended its combat mission in 2014, staying only to train Afghan forces. But the US continued its own, scaled-back combat operation, including air strikes.

Nearly 3,500 members of the international coalition forces have died in Afghanistan since the 2001 invasion, more than 2,300 of them American.

The figures for Afghan civilians, militants and government forces are more difficult to quantify. In a February 2019 report, the UN said that more than 32,000 civilians had died. The Watson Institute at Brown University says 58,000 security personnel and 42,000 opposition combatants have been killed.
*

24 September 2019
At least 40 civilians at a wedding party have been killed during a raid conducted by Afghan special forces on a Taliban hideout in Helmand province, officials said. Abdul Majed Akhand, a deputy provincial councilman, said the majority of the dead were women and children attending the wedding ceremony in Musa Qala district on Sunday night. On Monday, Omar Zwak, the provincial governor’s spokesman, told Al Jazeera that at least 14 fighters, including six foreigners, were also killed, adding that authorities were investigating reports on civilian casualties. There is uncertainty as to exactly what happened in the Musa Qala region of Helmand province on Sunday night and why so many civilians died. Al Jazeera’s Rob McBride reports from Kabul.