Houthi rebels fighting Saudi Arabia in Yemen claimed responsibility for the attack. They are backed by Iran and used Iranian weapons. America may have evidence the strike came from inside Iran itself. Mike Pompeo, the secretary of state, has called it “an act of war”. The details matter, but do not change the question: how to curb the aggression of Iran and its proxies? 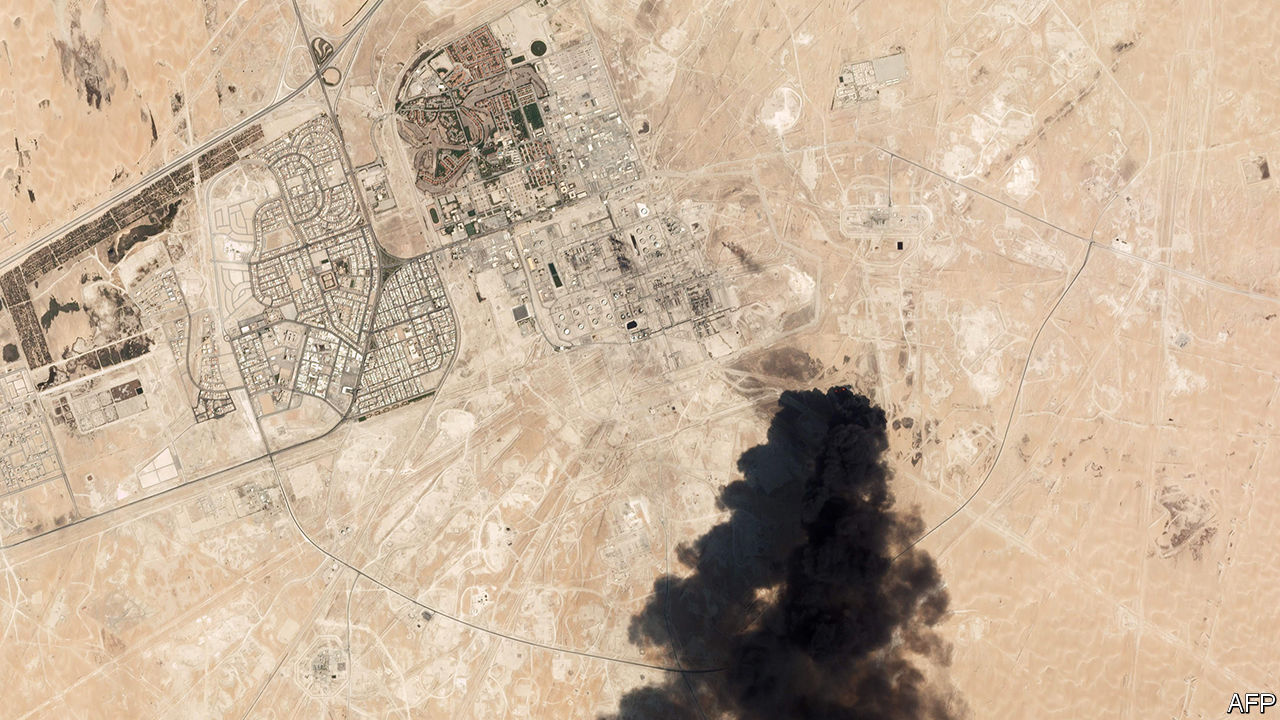 To reduce its climate risks, the world needs to curtail its production of oil. But there was nothing risk-reducing about the strike on Saudi Arabian oil facilities on 14 September 2019.

The drones and missiles that pummelled Abqaiq and Khurais cut the kingdom’s output by 5.7m barrels a day . It was a bigger loss to world markets than that brought about by Saddam Hussein’s invasion of Kuwait in 1991. That aggression led to a march on Baghdad by 35 countries. The strike last weekend was not an invasion; but an attack that reduces global oil supply by 6% is everybody’s business. Even if Saudi Arabia fulfils its pledge to restore output by the end of September, supplies from the world’s largest oil exporter are now vulnerable.

The missiles streaked down and turned the night sky orange. In the early hours of September 14th a barrage of fast-moving weapons hit Abqaiq, a town in the eastern Saudi desert that is home to the world’s largest oil-processing facility. They punched holes in the spheroids that process crude oil and smashed five of Abqaiq’s 18 stabilisation towers, lighting up the night. A separate volley set ablaze the Khurais oilfield, 185km to the south west.

When the sun rose a few hours later, thick plumes of smoke were visible from space. The images reminded some of the 1991 war with Iraq, when Saddam Hussein’s retreating army set fire to oilfields in Kuwait. Oil prices briefly surged 20% on news that more than 5.7m barrels a day of oil production had been halted. This was the biggest disruption to the world’s energy supply in decades

The world’s oil markets depend on Saudi Aramco, Saudi Arabia’s state-owned giant. In turn Aramco depends on Abqaiq. Crude from Saudi Arabia’s legendary oil fields—Ghawar, Khurais, Shaybah—comes to Abqaiq to be processed, coursing through its sprawling network of pipes, spheroids and stabilisation towers before being sent to customers around the world. Last year about half of Saudi Arabia’s production flowed through the facility. Little wonder that the kingdom’s enemies have long sought to cripple it.

On September 14th they succeeded. Drone strikes at Abqaiq and the Khurais oil field knocked out 5.7m barrels per day of production, a staggering 60% of the kingdom’s output and 6% of global supply. By September 17th, however, Abqaiq had resumed processing 2m barrels of oil. Amin Nasser, Aramco’s chief executive, said that capacity would be fully restored by the end of the month and that the attack would not affect plans to list a portion of Aramco’s shares in what is expected to be one of the biggest initial public offerings (ipo) ever.

Who are the Houthis?

Based out of Yemen’s northwest, the Houthis first came to international prominence in 2015, when they helped topple the government of Yemen’s president and regional U.S. ally Abed Rabbo Mansour Hadi.

Their history, however, stretches back to the early 1990s, when a group called Shabab al-Muminin (the Believing Youth) worked to raise awareness about the Zaydi branch of Shiite Islam, which had dominated Yemen for centuries but was sidelined after a civil war in the 1960s.

Hussein al-Houthi, one of the leaders of the Believing Youth, began staging anti-American protests after the U.S.-led invasion of Iraq in 2003. When Houthi was killed by government forces in 2003, his supporters renamed their group after him and continued a shift from religious protest to armed insurgency.

From 2015 onward, the Houthis have participated in the civil war that has engulfed Yemen, primarily facing off against supporters of Hadi, who is also backed by a Saudi-led international coalition.

Have the Houthis targeted Saudi Arabia before?

Yes. Since the start of the conflict within Yemen, the Houthis have sought to punish Saudi Arabia for its prominent role by launching attacks on Saudi soil. Last year, Saudi officials said they had intercepted more than 100 ballistic missiles fired from Houthi territory.

Armed drones attacked oil-pumping stations west of Riyadh in May and caused serious damage, while an attack on Abha airport in the south wounded 26 people in June.

But Saturday’s attack struck right at the center of Saudi Arabia’s oil production facilities, making it a significantly more sophisticated operation than what the Houthis have been known for in the past. The blasts took place in the districts of Khurais and Abqaiq, more than than 500 miles from the Houthi-controlled zones in Yemen, using precision strikes to cause maximum damage.

The attack may have used both drones and missiles. Fabian Hinz, a research associate at the James Martin Center for Nonproliferation Studies at Monterey, argued that photos of the remnants of a missile in Saudi Arabia show a weapon both too sophisticated to be produced domestically by the Houthis and never seen in Iran.

The war has become the world’s worst humanitarian crisis. The violence has pushed Yemen to the brink of famine and killed more than 90,000 people since 2015, according to the U.S.-based Armed Conflict Location & Event Data Project, or ACLED, which tracks the conflict.

Since the start of the Saudi-led war, Houthi rebels have been using drones in combat. The first appeared to be off-the-shelf, hobby-kit-style drones. Later, versions nearly identical to Iranian models turned up. Iran denies supplying the Houthis with weapons, although the U.N., the West and Gulf Arab nations say Tehran does.

The Saudi Minister for Foreign Affairs has told Sky News his country is ready do whatever it takes to defend itself against further missile and drone attacks.
https://www.youtube.com/watch?v=4PTarm1UBnU

(comment:  Iran is not iraq which is a flat country perfect for tanks Iran is a mountain region the usa will succeed but they would get kicked out by guerrilla warfare it would make Vietnam,Iraq and Afghanistan look like a child’s play that’s why the usa will not invade and they keep making accuses on why their not invading they clearly know that the sanctions are not working iran will fight till the death the west will not be able to deal with them the Saudis only want a war because of religion reasons its a sunni country and Iran is a Shia country the west are only interested in their resources and Israel see it as a threat to its regional power)

A drone attack on critical Saudi oil facility is being investigated as Yemen’s Houthi rebels claim they were behind the strikes and have warned of more attacks but the US claim Iranian involvement. The attack on Aramco could mean up to half of Saudi Arabia’s oil production could be disrupted.