There are big differences between a legal and illegal (unauthorised) immigrant, all over the world.   Every country have their own border control (or like in South Africa an Open border policy).   The Open border policy came from George Soros communist.   If  those illegals passed other countries, why don’t they take control of those immigrants and give them houses and work opportunities, but why must people walk through 10 countries and then make problems at their so-called destination? 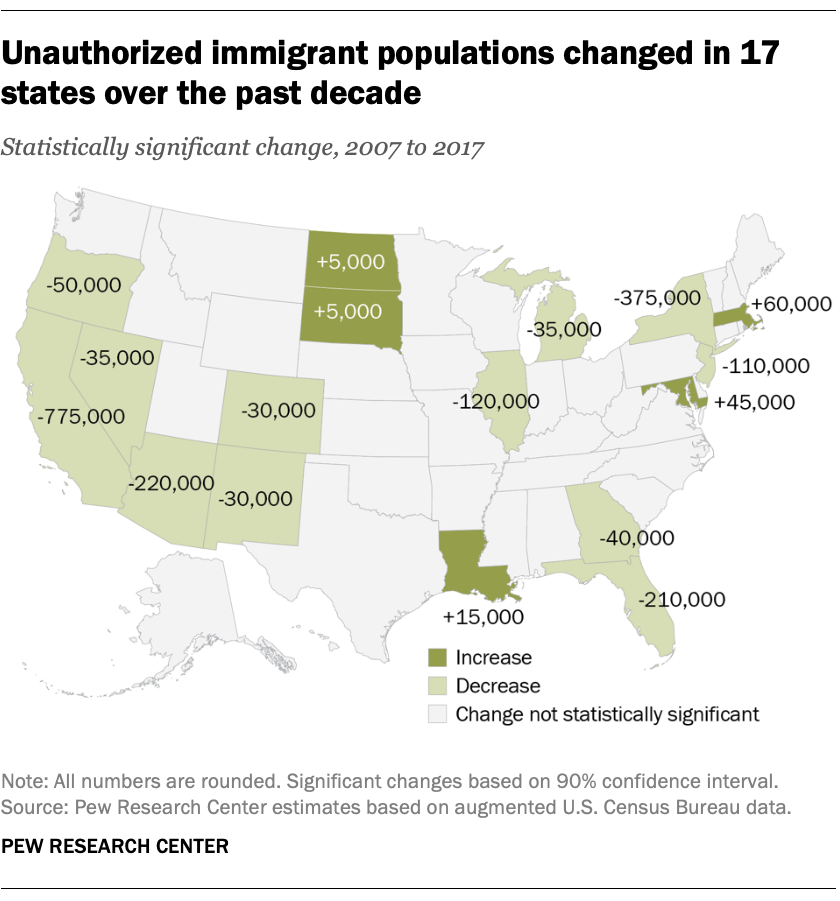 The number of unauthorized immigrants in the U.S. fell to its lowest level in more than a decade, according to new Pew Research Center estimates based on 2016 government data. The decline is due almost entirely to a sharp decrease in the number of Mexicans entering the country without authorization.

From 2007 to 2017, individual states experienced different trends. The unauthorized immigrant population decreased in a dozen states:

Between 2007 and 2017, the number of unauthorized immigrant workers fell by 625,000, as did their share of the total U.S. workforce over the same period.

In 2017, this group accounted for 4.6% of those in the U.S. who were working or were unemployed and looking for work.
*

5 facts about illegal immigration in the U.S.

Correction (June 24, 2019): A previous version of the chart “Mexicans are no longer the majority” gave an incorrect number of unauthorized immigrants from countries other than Mexico in 1990. There were 1.5 million.

The protesters  removed a “Blue Lives Matter” flag, honoring law enforcement, spray-painted it with the words “Abolish ICE,” then raised the flag upside-down, on a pole next to the Mexican flag, according to local media.
American flag – Colorado (ICE)

Several dozen migrants were bused to Denver overnight with the help of the New Mexico governor’s office to help crowded shelters in El Paso and neighboring Las C.ruces, New Mexico, where one shelter reported running low on food
Migrants moved from crowded border shelters as far north as Colorado

The EC’s answer came before the card was found in the hands of the terrorist Isis fugitive in Hungary, who immediately raises doubts about the quality of EU and UNHCR checks; and also about the real possibility that this payment instrument could only be used in Greece.
(Illegal) Refuge cards – Soros – (Hungarian PM)

In the past months an interrogation was presented by MEP Mauro Borghezio. «I understand that an organisation called Humanity Ventures has been established, in partnership between George Soros and MasterCard.
George Soros – Hungary – migrants

In 1979 he launched a scholarship program for black South African students to study at the University of Cape Town—his first ever venture into philanthropy. And in 1987, Soros provided financial support for a first dialogue between South African business and political leaders seeking to dismantle the apartheid system.   Zille and Ramaphela from the DA also is with OSF.SA, as well as Ramaphosa.
OSF.SA (Open Society) (open borders)- George Soros