Authorities in Colorado restored an American flag to its place Friday evening after protesters demonstrating outside a U.S. Immigration and Customs Enforcement (ICE) “Abolish ICE,”facility pulled down the star-spangled banner and flew the flag of Mexico in its place.   The protesters also removed a “Blue Lives Matter” flag, honoring law enforcement, spray-painted it with the words “Abolish ICE,” then raised the flag upside-down, on a pole next to the Mexican flag, according to local media. 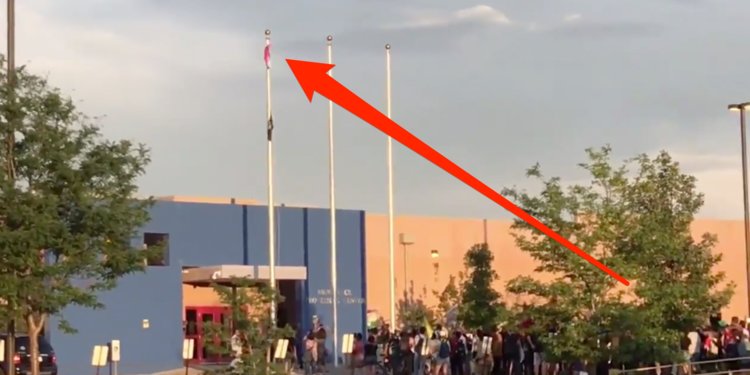 Hundreds of protesters had gathered in Aurora, Colorado, outside the federal facility that holds illegal immigrants, to protest ICE raids scheduled to begin Sunday in Denver and other major U.S. cities, FOX 31 Denver reported.

Aurora police Chief Nick Metz said the majority of protesters remained peaceful and some even thanked officers for their evening efforts.

The protest, part of a network of #LightsForLiberty events, also dubbed the “March to Close Concentration Camps,” called for detention centers at the U.S.-Mexico border to be closed and for all immigrants being held in those locations to be granted entry to the U.S., according to the event’s Facebook page.

President Trump delayed the operation by two weeks to allow Dems to propose a bipartisan solution to the humanitarian crisis at the border.

Speaking to Fox News during his visit to the border Friday, Vice President Mike Pence said the upcoming ICE raids will not be done at random and will be focused on “removing those deported by courts.”

Anti-ICE demonstrators protest at an ICE facility in Aurora, Colorado.

AURORA, Colo. (CBS4)– Hundreds of protesters gathered in Aurora on Friday evening to march to the ICE detention facility where illegal and undocumented immigrants are being housed. They also removed the U.S. flag, replaced it with a Mexican flag, and spray painted graffiti on a Blue Lives Matter flag before it was seen flying upside down on the flag pole.

A U.S. Immigration and Customs Enforcement facility in Colorado was the site of protests where activists removed an American flag.    Hundreds of protesters had assembled at the Aurora facility, which houses unauthorized immigrants, to protest the impending ICE raids that are reported to begin soon. Protesters raised the national flag of Mexico in place of the American flag and vandalized a Blue Lives Matter flag, which honors law enforcement, by spray painting the words “Abolish I.C.E.” on the banner and flying it upside down alongside the Mexican flag. Local authorities worked quickly to take down the symbols of protest and restore the American flag.   The protest in Colorado was one of several that occurred across the country on Friday as part of the #LightsForLiberty-organized “March to Close Concentration Camps” which called for the closure of all immigrant detention centers in the U.S. and for the immigrants being held to be granted access into the country. Protests were also held in California, New York, and Oregon.

The protesters say they are demonstrating against the treatment of the people living inside. The Blue Lives Matter flag was vandalized with “Abolish ICE” in spray paint.   The original flags outside the ICE facility, including the U.S. flag and Colorado flag were placed on the flag poles after the crowd dispersed. The Mexican flag and spray painted Blue Lives Matter flag were removed.

A Colorado man is facing eviction because he is defying a rule prohibiting tenants from his apartment complex from flying the American flag.   MIles Hoenisch, who lives in the Avana Eastlake Apartments in Thornton, said he served in the Army for nearly seven years and had a tour of duty in Iraq, KDVR reported.   “I joined the Army because I wanted to give back to my country,” Hoenisch told the television station.

According to Hoenisch, his lease agreement notes that no flags of any kind are allowed on balconies, KDVR reported.   Hoenisch said he has displayed the American flag on his balcony since mid-June and was told by the property manager last week to remove it.   When Hoenisch asked why he said the apartment official told him “the American flag makes the property look undesirable.”   “We can’t fly the American flag, which makes no damn sense to me,” Hoenisch told KDVR.

In a statement, officials from Avana Eastlake Apartments said they are required “to treat all residents the same.”    “We are proud to support our country and the veterans who have served,” the statement said. “Our lease agreement, which all residents sign, prohibits any type of flag displayed from balconies.  We often remind residents of this policy and whether it is a college football flag or an American flag,”   “The country itself, and the pride of this country is not the same as it used to be,” Hoenisch told KDVR.

Hoenisch said he will continue to fight the rule, the television station reported.    According to Denver attorney Parker Semler, federal and state laws prevent homeowner associations and condominium associations from banning the display of American flags, KDVR reported. Those laws, however, do not apply to tenants in apartments, the attorney told the television station.