29-31 July 2019 – ONGOING     For a moment you saw the pictures and photos, watch them walking, screaming, burning, destroy you know, they are loving to live like that and walk all in litter and demand – a red revolution since 1955.   Revolution is a lifestyle.   This is not the first time and not the last time when they destroy.   Bus and truck drivers were  involved in the illegal protest in the streets of Pretoria – Tswane.   Trucks and buses were used to barricade all entrance and exit points.   It is just easy for them to work together in this situation.     A revolution well-planned to destroy small businesses as well.

The City of Tshwane employees continued with a protest for higher pay (18%) on Tuesday, 30 July blocking roads despite a court order barring them from disrupting traffic.  Hundreds of disgruntled workers affiliated to the South African Municipal Workers Union (Samwu) took to the streets on Monday 29 July, illegally blocking all major routes into the central business district while demanding the salary increase and an end to labour brokering.

The SA Municipal Workers Union (Samwu) and the City of Tshwane will head for a showdown over wage increases at the South African Local Government Bargaining Council in Centurion.  Officers were deployed to guard municipal buildings, bus depots, resevoirs and electricity power stations.    They received news that the protesters planned to tamper the electricity and water supply.   The strike is all about an 18%  salary increase at the bargaining council.

The stench across the capital’s CBD is getting worse

The Tshwane council obtained an interdict against Samwu prohibiting the strike.   A Member of mayoral committee for roads and transport Sheila Senkubuge said the city had suspended A Re Yeng and Tshwane Bus Services operations after some routes were blocked by striking bus drivers.   “We strongly condemn this action and assure the public that criminal charges of theft will be laid against those involved, as well as disciplinary cases opened,” she said.

Groups of protesters were spotted blocking the roads, intersections and disrupting traffic.  Their strike continued for the third day at a time when their union and the City are expected to negotiate over salary increases at the bargaining council.   Meanwhile, the City have announced that it has recovered at least 40 buses, which were used to block the roads and intersections in the past two days.  The City said the buses have been returned to the municipal bus depot.

Tshwane House, situated on Madiba Street in the CBD, was a no-go area on Tuesday as the municipal workers’ strike continued.

*
Mayoral spokesperson Omogolo Taunyane said: “The strike undermines the rule of law, especially after the City obtained an interdict against the action.”

She also confirmed the City would enter into talks with Samwu at the bargaining council and denounced the strike as illegal.  Workers entered day two of the strike after the late-night meeting on Monday between their union representatives and acting mayor Abel Tau failed to yield positive results.    Taunyane said: “It was not a fruitful discussion; that is why they are still continuing protesting.”

Buses and municipal trucks were used to block the roads, impacting negatively on the flow of traffic and business operations.   Litter bins were turned upside down and streets such Madiba, Thabo Sehume, Lillian Ngoyi and Francis Baard were strewn with rubbish. Bad smells from the decomposed garbage permeated the air, causing a possible health havoc.
*

Regional spokesperson Bafuze Yabo said: “The ANC maintains its position of supporting the action and work of Samwu as a labour union. We have full confidence in the ability of Samwu to represent the workers competently towards the resolution of the impasse.”

Yabo said the ANC was monitoring developments intimately and would get involved should there be a deadlock and political disagreement or stalemate between Samwu and the employer.”   Meanwhile, the business community has denounced the unlawful strike as starting to take a toll on their operations.

Taxi drivers expressed frustration with the disruptions caused by protesting workers, saying they had seriously affected their business.   They harboured fears that they would not be able to repay loans for their vehicles after they lost profits due to the protest.

Thomas Ndlovu, who operates a taxi from Thaba Tshwane to the CBD, bemoaned that disruptions on the roads forced him to spend more than two hours on a single trip to his destination.   He was worried that too much petrol was wasted on the road, forcing drivers to spend more money than they could afford.   “It is month-end and most of us are still owing loans to the banks for our vehicles. The worry is that they might be repossessed. It is really bad and we don’t know when the situation is going to end,” Ndlovu said.

His sentiment was shared by most shop owners, who closed their shops because they felt threatened by protesters.   They lamented that their businesses were hard hit by the protest, which made them to lose out on profits.   They had to close their shops for the better part of the day to protect themselves from possible harm.  The stick-wielding protesters went on the rampage, trashing dustbins on the roads and blockading traffic.

Demonstrators are marching in groups through different streets, trashing dustbins on the roads and blocking intersections with rocks.

Shops are being closed in the busy Bloed Streets and taxis have ceased to operate.   Police officers and metro police could be spotted amid the tense situation, watching protesters causing chaos.

Hostile protesters earlier on clashed with a taxi driver on the corner of Madiba and Paul Kruger streets.   They threateningly ordered the driver to make a u-turn after they barricaded the intersection with rocks, but he refused.  They were provoked when he threatened to shoot them and warned him that they would pelt him with rocks.  He eventually gave in and drove back with more protesters confronting him. 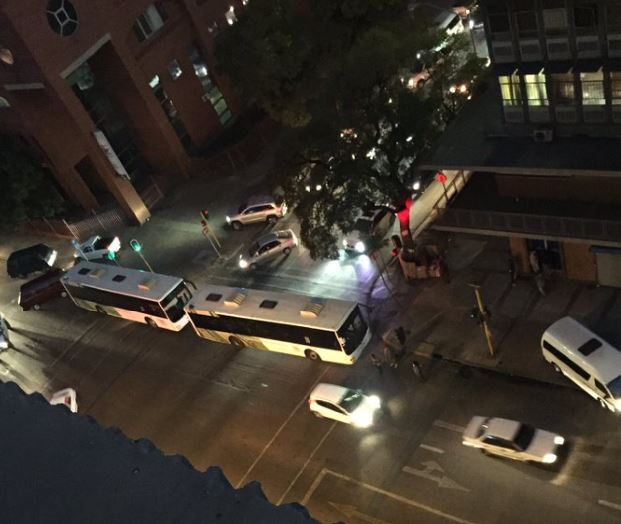