Public Protector Busisiwe Mkhwebane delivered a mortal blow to the reformist President Cyril Ramaphosa on 19 July 2019   The findings against him are the very worst he could have expected. Not only did he “deliberately” mislead Parliament about the paltry R500 000 donation to his campaign by Bosasa’s Gavin Watson, but in doing so he violated the Constitution, failed to declare donations and the National Prosecuting Authority must investigate allegations of money-laundering, she found. 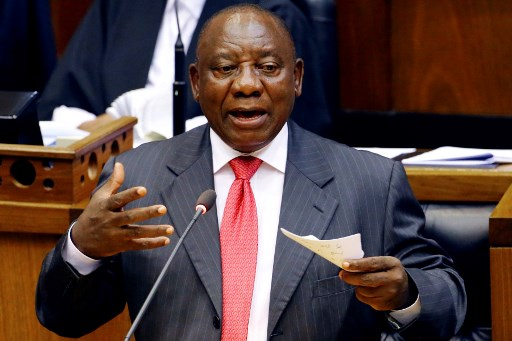 The Public Protector releases a report on President Cyril Ramaphosa

Public Protector Busisiwe Mkhwebane has found President Cyril Ramaphosa lied to Parliament. She says he breached the executive members ethics code when he told Parliament he was not aware of a five hundred thousand rand Bosasa donation to his ANC presidential campaign. Releasing her report a short while ago, Mkhwebane made damning findings against Ramaphosa. She says he materially benefited from donations to his campaign and the allegation of money laundering has merit.

President Cyril Ramaphosa insists that he has complied with Public Protector Busisiwe Mkhwebane’s findings after an investigation into Public Enterprises minister, Pravin Gordhan. Ramaphosa says he submitted a written response to Mkhwebane, explaining that Gordhan is taking the report on judicial review. Manqoba Mchunu reports

Public Protector Busisiwe Mkhwebane has found that President Cyril Ramaphosa misled parliament in his response to a question about a R500,000 donation from Bosasa for his presidential campaign in 2017.

DA leader Mmusi Maimane filed a complaint with Mkhwebane, asking her to investigate whether Ramaphosa deliberately misled parliament in 2018 when he initially said the money was paid to his son Andile as part of a legitimate business transaction.

Releasing her findings on Friday, Mkhwebane said Ramaphosa had misled parliament and acted in violation of the provisions of the executive ethics code.

“President Ramaphosa’s statement on 6 November  2018 on his reply to Mr Maimane’s question … was misleading as he also conceded in his correspondence to my office, and even in his subsequent letter to the speaker of the National Assembly on November 14 2018, where he sought to correct the incorrect information he had provided in the National Assembly.”

Mkhwebane found that the president “deliberately” misled parliament as he should have allowed himself enough time to research a “well-informed” response.

“I therefore find that President Ramaphosa’s conduct … although ostensibly in good faith, to be inconsistent with his office as a member of cabinet and therefore in violation of section 96(1) of the constitution,” read Mkhwebane’s report.

According to Mkhwebane, Ramaphosa acted improperly and in violation of the provisions of the ethics code in that he exposed himself to a situation involving the risk of a conflict between his official duties and his private interests.

“… the campaign pledges towards the CR17 campaign were some form of sponsorship, and that they were direct financial sponsorship or assistance from non-party sources other than a family member or permanent companion, and were therefor benefits of a material nature to President Ramaphosa,” Mkhwebane said.

“He was therefore duty-bound to declare such financial benefit accruing to him from the campaign pledges.”

Mkhwebane’s findings also revealed that there were three donations of R30m, R39m and R51m that came from a donor between March and September 2017, for the CR17 campaign.

These donations, she said, posed a risk of “some sort of state capture by those donating these moneys to the campaign”.

Mkhwebane also found that an “improper” relationship existed between Ramaphosa, his family and Bosasa.

“The allegation that there is an improper relationship between President Ramaphosa and his family on one side and the company African Global Operations [Bosasa], on the other side, due to the nature of the R500,000 payment passing through several intermediaries, instead of a straight donation towards the CR17 campaign, thus raising suspicion of money laundering, has merit,” said Mkhwebane.

She has referred prima facie evidence of money laundering uncovered during her investigation to the National Prosecuting Authority (NPA).

Mkhwebane also gave the speaker of the National Assembly 30 days to refer her finding that Ramaphosa has violated the code of ethical conduct to the joint committee on ethics and members’ interests for consideration.

Mkhwebane has also directed the national police commissioner to investigate criminal conduct against former Bosasa chief executive Gavin Watson for violation of section 11 (3) of the Public Protector Act by lying under oath when she interviewed him in her office.

DA leader Mmusi Maimane wants President Cyril Ramaphosa to pay his own legal fees should he decide to challenge the yet-to-be-released public protector report on Bosasa.

Public protector Busisiwe Mkhwebane is expected to release details of a probe into a R500,000 donation paid towards Ramaphosa’s campaign for his ANC presidential bid in 2017.

“The president has every right to do so. However, South Africans cannot be expected to pay the legal bill for the president to defend himself against allegations of corruption, abuse of power, and money laundering.

“We contend that Ramaphosa would be required by law to pay for such legal action from his own pocket as he would be litigating in his personal capacity,” Maimane said in a statement.

Maimane is the main complainant in the matter, after he initially asked Ramaphosa about the donation during a question-and-answer session.

“I have today approached President Ramaphosa in writing, requesting an undertaking that he will not use any public money to fund his legal action.

“In particular, the president must reassure South Africans that he does not intend to use the services of the state attorney or cause the state attorney to pay legal practitioners on his behalf relating to this matter,” said Maimane.

In his letter to Ramaphosa, Maimane said if the facts around the donation were correct, the money would have been donated to him in his private capacity and not as deputy president of the country, a position he occupied at the time.

“SA is fast running out of money. We cannot afford to hand millions of rands to the president to fight his personal legal battles,” added Maimane.

On Thursday, ANC national chairperson Gwede Mantashe implied that Mkhwebane’s probe against Ramaphosa may be political.

“The [public protector] is a [chapter] nine institution. If it behaves delinquently, that should be followed formally and be engaged. There are times when you think that she has occupied a political space that does not belong to her, but you must find a way of dealing with that. That is why we are in politics,” he reportedly said.

Mantashe also questioned the validity of her investigation into alleged money-laundering during Ramaphosa’s campaign for the position of ANC president.

“There were seven presidential candidates of the ANC. She is not interested in any of them, except one. That is political. If she is really interested to follow the question of fundraising, of campaigning in the party, not in government, which I don’t think is her jurisdiction, if she has an interest in that, she would have investigated seven of them. Once you select one, you are playing a political role,” News 24 reported.
She has subpoenaed three bank accounts linked to the CR17 campaign to investigate who else, besides Bosasa, donated to Ramaphosa’s ANC presidential bid.