The G20 is a forum that is used to discuss policies surrounding international financial stability. The forum was originally formed in 1999. The G20 is made up of a group of nations with the most advanced and emergency economies in the world. These countries make up about 85% of global GDP, over 75% of global trade, and approximately two-thirds of the world’s total population.

Osaka, Japan.  The SABC reported on 27 June 2019 that Ramaphosa is in Japan for the G20 Summit to tell the world that South Africa is open for business. This is according to Minister in the Presidency Jackson Mthembu.   He was accompanied by several ministers, including  Naledi Pandor of International Relations, Ibrahim Patel from Trade and Industry Portfolio as well Finance Minister Tito Mboweni.   Matters relating to trade tensions, debt sustainability, inequality and investment will top the agenda at the conference.

“I think our story is pretty clear. We’ve got seven priorities that the President outlined in the State of the Nation last week. We are focused on insuring that we package them in a way that can attract investments that are critical, because we’ve got a lot to offer. In terms of being a strong base, if you remember our seven priorities is African region. So, we have to create an environment where global businesses come and set base in South Africa so that they can springboard into the rest of the continent.”

G20 Summit
President Cyril Ramaphosa is in Japan for the G20 Summit to tell the world that South Africa is open for business.

AFRICANEWS – Putin and Ramaphosa
Ramaphosa is among leaders attending the G20 summit in Japan, where he met Russian counterpart Vladimir Puti on the sidelines of the summit in Osaka and pay much attention to multifaceted development of their relations with South Africa.

On 29 June 2019 he held a bilateral meeting with Japanese Prime Minister Shinzo Abe on Saturday on the sidelines of the G20 summit in Osaka.   The two leaders were expected to discuss economic cooperation.

The presidency says future summits would also take stock of progress in curbing illicit financial flows.
>
President Ramaphosa has shared his vision of turning south Africa’s economy around with business communities in Osaka japan. The President is leading a high powered delegation that includes the minister of finance and the international relations. He also put a strong case for international business to invest in the continent of Africa

President Cyril Ramaphosa has described his working visit to Japan for the G20 Summit as a success and congratulated Japan on hosting a well-organised summit, the presidency said on 30 June 2019.

In the interest of advancing African development, the leaders reaffirmed their commitment to the timely implementation of the 2030 Agenda for Sustainable Development and the Addis Ababa Action Agenda. There were also enhanced roles for the World Bank, African Development Bank, and International Monetary Fund to implement the compact with Africa.

This initiative would contribute to the realisation of the African Union’s Agenda 2063.     On trade and investment, the summit committed to work towards a free, fair, non-discriminatory, transparent, predictable, stable, and open market environment.     Regarding digitalisation, global leaders agreed that to harness the full potential of data, there needed to be a data flow with trust, to be enabled through international policy discussions on the sharing of good practices and regulatory frameworks.

Additionally, the G20 would implement its anti-corruption action plan for 2019-2021, which strengthened synergies among related international instruments. There was also a strong will among the majority of the member countries to pursue the 2015 Paris Climate Agreement’s goals of dealing with climate change.

Ahead of the summit, Ramaphosa convened the standing trilateral meeting with African Union chair President Abdel Fattah el-Sisi of Egypt and Nepad chair President Macky Sall of Senegal. The discussion made it possible for these leaders to consolidate Africa’s position around the summit’s agenda, the presidency said.

Ramaphosa was also invited to participate in the China-Africa (South Africa, Egypt, Senegal and with the participation of the United Nations secretary general) leaders meeting. The meeting exchanged views on the priorities for the G20, the Forum on China-Africa Cooperation (Focac), and Africa’s development agenda.

The president further participated in the standing informal Brazil, Russia, India, China, South Africa (Brics) leaders’ meeting chaired by Brazil. The meeting reflected on the current geopolitical environment and sought collaboration and synergies among Brics members in preparation for the G20 Summit.

Ramaphosa also had numerous bilateral meetings to strengthen relations with Russia, China, Japan, and Saudi Arabia, and the president of the World Bank.    He concluded his Osaka programme by engaging with business during the Japan-South Africa CEO Business Roundtable. The engagement was chaired by Trade and Industry Minister Ebrahim Patel and included more than 20 Japanese business representatives and a South African business contingent. The event offered a unique platform to explore business opportunities and build partnerships in South Africa and Japan, the presidency said. 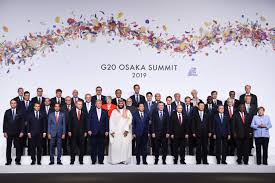