2017 – South Africa  avoided suffering any consequences for failing to deliver Sudanese President and genocide accused Omar al-Bashir to international justice — despite losing every legal argument made before the International Criminal Court (ICC).   South Africa had been under a clear obligation to arrest al-Bashir when he attended an African Union conference in Johannesburg in 2015, the ICC said in a ruling, even though its judges differed on the exact legal mechanisms that had created that obligation.   By failing to arrest al-Bashir, the court said, South Africa had failed to honour its obligations under international law. 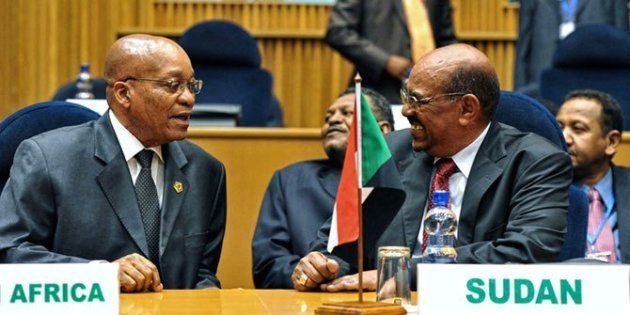 Yet the court chose not to refer the matter to the United Nations Security Council or to the Assembly of The Parties to the Rome Statute under which the ICC operates – meaning no real consequences for South Africa.

This position appeared to be a protest from a court that had been hung out to dry by those who had created it, but now lack the political will to bring those who commit genocide to trial.

In six previous cases where countries had failed to arrest al-Bashir the ICC had referred them to the UN and the Assembly, Judge Cuno Tarfusser said on Thursday. Yet that had “not resulted in measures against state parties that have failed to comply with their obligations”, he said, inaction that rendered such an action “futile”.

To further underscore the evident disinterest in supporting the ICC, the court pointed out that it had invited both the UN and its member parties to give it input while it was considering South Africa’s failure. The UN declined, and only Belgium stepped forward as an individual country to present information.

The ICC has been complaining about the lack of political support in doing its job for some time, said international relations expert Kelly-Jo Bluen of the Institute for Justice and Reconciliation on Thursday.
On Sudan, in particular, it was not likely to get such support from any country of significance.

“Russia and China have an interesting relationship with Sudan,” she said. “Meanwhile the West, broadly, has also started warming towards Sudan. A lot of Western nations who are seeing terrorism on their soil see Sudan as a potential ally in that, and around migration, so geopolitically there is not a lot of incentive to be harsh on Sudan.”

It is probably no coincidence that the ICC chose the South African case to express its displeasure about the lack of support from nation states, said Kaajal Ramjathan-Keogh, executive director of the Southern Africa Litigation Centre (SALC). South Africa’s domestic legal developments allowed the ICC to take a political approach, and South Africa’s wobbly status as an ICC participant compelled it to do so. South Africa has one failed attempt to withdraw from the court’s jurisdiction and there is a standing ANC decision to do so.

“I think the ICC is very sensitive around South Africa,” Ramjathan-Keogh said. “They didn’t want to alienate South Africa, perhaps reduce the chances of a reversal in the decision to withdraw. Under the circumstances, I think it is a very good ruling.”

The SALC brought legal action to compel the South African government to arrest al-Bashir while he was in the country, a fight it won all the way to the Supreme Court of Appeal, even after al-Bashir mysteriously managed to slip out of the country without passing through immigration.

After South Africa’s domestic courts made it clear that the country had been obliged to arrest and deliver al-Bashir, the ICC said on Thursday, the government seemed to accept that obligation, not least because it is no longer appealing that matter.

“It therefore appears that the government of South Africa has accepted its obligation to cooperate with the [ICC] under its domestic legal framework,” said Tarfusser on behalf of the court.

And so, because there is no longer any doubt about South Africa’s obligations, referral of its failure to comply with those obligations to the likes of the UN Security Council would “be of no consequence”.

The ICC made no reference whatsoever to the South African executive government’s attempt to withdraw from the Rome Statute, which was struck down as unprocedural.

Such a withdrawal requires a notice period of one year, under the Rome Statute itself, during which South Africa would definitely remain obliged to arrest al-Bashir should he visit.

The government and ANC have argued that arresting a sitting president would do damage to future negotiations and peace-keeping efforts, especially when they visit South Africa on business of the African Union, as al-Bashir did in 2015.

However, in a minority opinion also delivered on Thursday, one of the three judges who sat in the matter suggested that South Africa’s obligation to arrest al-Bashir may not be undone simply by withdrawing from the Rome Statute.

Both Sudan and South Africa are signatories to the 1948 Convention on the Prevention and Punishment of the Crime of Genocide, said Judge Marc Perrin de Brichambaut. That alone is enough to demand that al-Bashir, who is sought for genocide, be arrested.

The department of international relations could not immediately say whether that meant South Africa would also consider withdrawing from what is popularly known as the Genocide Convention. The ICC judgement still needed to be studied, said spokesperson Clayson Monyela.

South Africa has five days to lodge an appeal, should it wish to do so.

“I think they have given both sides something to be happy about. I think South Africa should grab it [the partial victory] and run away.”

His flight is a se rious challenge to the authority of the ICC, which has issued two international warrants for his arrest.

As Bashir’s plane took off from Waterkloof military airfield outside Pretoria, the local high court was hearing arguments over an application that would have forced the South African government to arrest him.

A South African judge criticised the government for allowing Bashir to leave. “The conduct of the respondents to the extent that they have failed to take steps to arrest and detain the president of Sudan, Omar al-Bashir, is inconsistent with the constitution of the Republic of South Africa,” Dunstan Mlambo said.

The high court ruled after Bashir’s departure that he should have been detained.

Bashir had travelled to South Africa for an African Union summit chaired by Zimbabwe’s president, Robert Mugabe, who has urged African leaders to pull out of the ICC.

African states accuse the court, which is based in The Hague, of only targeting political leaders on their continent and failing to bring those responsible for war crimes in the Middle East and elsewhere to justice.

Human rights groups, however, were outraged that Bashir could openly defy arrest. The Southern Africa Litigation Centre had filed an urgent application to overturn a government decision to grant immunity to all delegates attending the summit.

James Stewart, the ICC’s deputy prosecutor, said: “In our view, it was very clear that South Africa should have detained Bashir so he could have been brought to trial in The Hague.”

On Sunday, judge Hans Fabricius sitting in South Africa’s high court had issued an interim order barring Bashir from leaving the country. The government had said it would argue against the court application on the grounds that it had granted delegates at the conference immunity.