NO – 3338 (killed since 1994)
3 April 2019 – GEMARTEL EN GEMOOR
Today, 9 years ago, Eugène Terre’Blanche murdered on his farm – Saturday, 03 April 2010
Eugène Terre’Blanche, founder and leader of the Afrikaner Weerstandsbeweging (AWB; Afrikaner Resistance Movement in English) was murdered on his farm Villana, just outside Ventersdorp, on 3 April 2010.   He was beaten to death with pipes and pangas (machetes), while napping. His body was found on the bed with facial and head injuries.  Two men, Chris Mahlangu, aged 28, Patrick Ndlovu, aged 15, were arrested. Both were workers on Terre’Blanche’s farm. They were both charged with murder, and one was released on bail. A Black Farmer speaks good about Eugene TerreBlanche at his funeral. That’s an issue that is underreported. AWB leader Eugene Terreblanche is usually portrayed as being “racist” and other phrases. Not untypically for South Africa Boer Farmer Eugene TerreBlanche had actually a good relationship to Blacks. That didn’t preven him being murdered. Their murderers are standing trial at present.

South African white supremacist leader Eugene Terreblanche has been killed on his farm in the country’s north-west. Mr Terreblanche, 69, was beaten to death by two farm workers after a dispute over unpaid wages, police say.

Two people have been charged. President Jacob Zuma has appealed for calm, saying the killing should not incite racial hatred. Mr Terreblanche, who campaigned for a separate white homeland, came to prominence in the early 1980s.

He became the champion of a tiny minority determined to stop the process that was bringing apartheid to an end. “Mr Terreblanche’s body was found on the bed with facial and head injuries,” said Natal Police Capt Adele Myburgh.
“There was a panga [broad-blade knife] on him and knobkerrie [wooden club] next to the bed.” Capt Myburgh said Mr Terreblanche had been killed at his home outside the town of Ventersdorp, North West province, after a payment dispute with two workers, aged 21 and 15, who have been arrested and charged with his murder. Mr Zuma condemned the killing as a “terrible deed”. “The president appeals for calm… and asks South Africans not to allow agent provocateurs to take advantage of this situation by inciting or fuelling racial hatred,” his office said in a statement reported by South Africa’s SAPA news agency. “The murder of Terreblanche must be condemned, irrespective of how his killers think they may have been justified. They had no right to take his life.”
.
https://www.youtube.com/watch?v=m09b8WEaVJ8 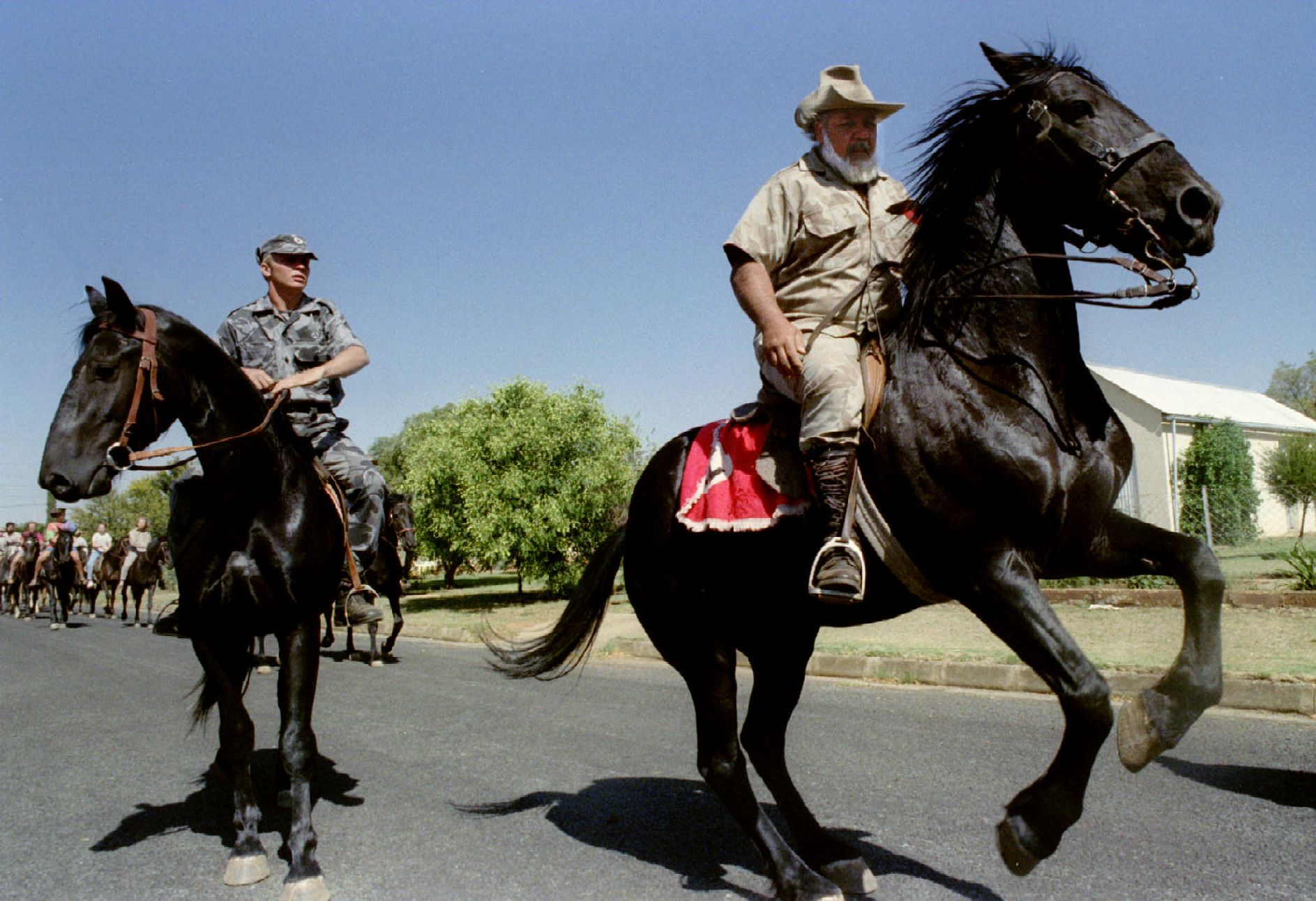 A black farmworker was jailed for life on Wednesday for the murder of the white supremacist leader Eugène Terre’Blanche, ending a two-year case that raised the spectre of racial unrest in South Africa.     About 100 protesters sang racially charged songs outside the courtroom in Ventersdorp in support of 30-year-old Chris Mahlangu, who had pleaded guilty but argued that he acted in self-defence.

They were opposed by 20 white protesters who carried a doll representing a black man, with a rope around its neck, and a sign that said, “Hang Mahlangu”.   Mahlangu was found guilty of beating 69-year-old Terre’Blanche to death at his farmhouse with a pipe in April 2010. The killing shook South Africa and triggered fears of racial conflict that proved largely unfounded.

Judge John Horn said the attack had not been not racially motivated but was a violent dispute over wages. Horn rejected a defence argument that Mahlangu had been sodomised by Terre’Blanche.

This week Mahlangu claimed he was HIV positive and said he believed he had been infected by Terre’Blanche.    Mahlangu’s lawyer, Kgomotso Tlouane, had appealed to Horn not to sentence Mahlangu to life in prison. He said that Mahlangu was drunk at the time of the murder, frustrated because he had not been paid and that he had low intellectual capacity.   Mahlangu has said that he felt he did no wrong by ridding the world of a man some called a monster.   A second man, Patrick Ndlovu, was acquitted of murder but found guilty of breaking and entering with intent to steal. Ndlovu, who was 15 when the killing happened, a minor at the time, received a two-year prison sentence on Wednesday, which meant he was freed for having already served time. He turned 18 during the trial.

The defence lawyer, Zola Majavu, had pleaded for leniency for Ndlovu, saying that he grew up in squalor, had an alcoholic mother and was already a full-time farm labourer with a conviction for petty theft at the age of 15.    “I have never in my professional life pleaded for a client the way I’m doing,” Majavu said. “He did not have the benefit of being raised by a capable, responsible and caring mother. Instead, his mother is an alcoholic who could not provide him with maternal care and guidance.”

Terre’Blanche’s widow, Martie, earlier reportedly said she had no feelings of hatred towards her husband’s killer.   Johan Engel, a social worker, told the court that he had interviewed her in June to determine the impact the murder on her family, Beeld newspaper reported. “I want to reclaim my perspective on life, this court case has been a huge setback,” she was quoted as telling Engel. “I do not hate the accused, and I’m not bitter … they crushed me and they murdered my husband in the most barbaric way.”

She said she still “died 10 deaths” when she drove past his farm in Ventersdorp, 80 miles west of Johannesburg, Beeld reported.   Terre’Blanche, a burly firebrand with an instantly recognisable thick white beard, co-founded the Afrikaner Resistance Movement to form an all-white republic within South Africa. Its members adopted military uniforms and flags with a symbol reminiscent of the Nazi swastika.

A small group of his armed supporters attempted a coup in the black-run “homeland” of Bophuthatswana shortly before the first democratic elections in April 1994 but retreated after meeting resistance from security forces.    In 1997 Terre’Blanche was sentenced to six years in prison for the attempted murder of a black security guard and assault of a black gas-station worker. His influence in the white supremacist movement had waned by the time he died.