If a government goes down the average citizens that graze at the bottom will pay the price with taxes, salary cuts or job loses. The guys on top are already out reinvesting their money elsewhere. This is also the reason why the number of billionaires has doubled since the last economic crash.   If banks fail, same thing happens. The bankers get bailed out from yet another ponzi schemer — the government. The same participants, the citizens, pay. As for legibility? A bank offers nothing but credit. No real value, nada. A government produces absolutely nothing, yet they are all financed by the labour of the citizens, the only ones providing real value.

A possibility for all the SOE’s in South Africa?

An Opinion Piece by Daniel Sutherland in 2016 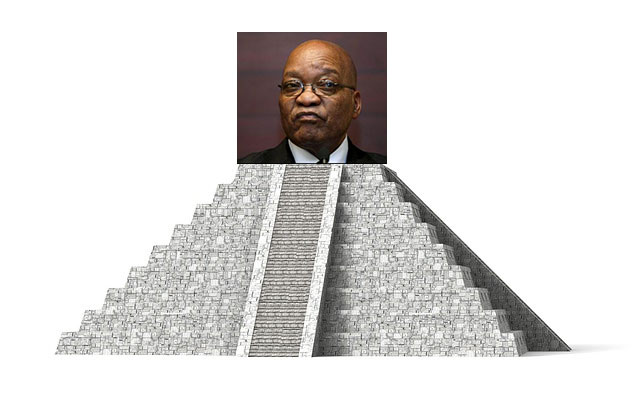 You might have noticed that I always put a Z before the ANC. That Z stands for Zuma ANC.

I only started commenting on social sites when I became aware of the criminal cartel that JZ783 [Jacob Zuma – 783 criminal charges] is running.

ZANC is basically an organized crime group, make that cult, with an omerta code.

Its a pyramid scheme, one that is running the country right into the ground.

I can not keep quiet. I will not.

The higher you climb the steps of the pyramid, the more you benefit. The more the gravy gets.

If you climb the pyramid high enough, you can start to appoint family members to city council administrations for instance, you can ask for the 10% or higher commission on tenders awarded, you can start steering tenders the way of shelf companies registered in the name of your wife or boyfriend. Ask Gwede.

It takes a while before you can start extracting rent.

JZ783 is the master rent seeker.The top of the pyramid.

He is blunt in the way he is doing it. Very simple. He made the Guptas his partners, appointed his son Duduzane as a Gupta shareholder, and outsourced the appointing of ministers to the Guptas.

The ministers can benefit because they can enjoy the spoils of ministerial office, as long as they do the bidding of the Gupta- Zuma partnership.
The Guptas, with the full knowledge of the ministers in charge, have taken over the boards of Transnet, Eskom and Denel. Once they were in charge of the boards of the SOE’s, the tenders to the Zupta entities started flowing.

As exposed by the amaBhungane Centre for Investigative journalism, they also asked protection money from entities that wanted to do business with the SOE’S they controlled. Its like what the Mafia also did. You can not do business with an SOE before you paid off the Guptas, who now owned the SOE’s.

Case in point is the R100 million bribe that Neotel had to pay a Gupta linked shelf company called Homix in order to get a contract from Transnet. Brian Molefe was the CEO of Transnet at that time, and Anoj Singh the CFO. Both are now at Eskom.

All these bribes and protection money eventually gets laundered out of the country.

Trillian is another Gupta money laundering vehicle doing so called business with SOE’s.

All this criminal activity is right under the noses of everyone. Its so rotten that if the Scorpions still existed, it would have never happened. Why do you think that JZ783’s first act was the disbandment of the Scorpions?

The outfit run by Lying Benny Ntlemeza is a Zupta protecting agency..

The NPA run by “the Sheep” is the Zuptas’s protectors.

The new ZP, spy Mkhwebane, is a Zupta Protector.

Its gangster’s paradise. Its a gold rush. How to avoid falling victim to “get rich quick” schemes:

Signs to look out for that it is a “Get Rich Quick scam”:

Awareness tips on how not to fall victim to “Get Rich Quick scams”:

Tips to spot a Ponzi scheme: