USS Salem, a 17,000-ton Des Moines class heavy cruiser, was built at Quincy, Massachusetts. Commissioned in May 1949, she spent her decade-long active career alternating between service in the Atlantic and deployed to the Mediterranean Sea as flagship of the Sixth Fleet. Salem made her first “Med” cruise in May-September 1950. Subsequent annual deployments took place in March-September 1951, April-September 1952, April-October 1953, May-September 1954 and May-September 1955. 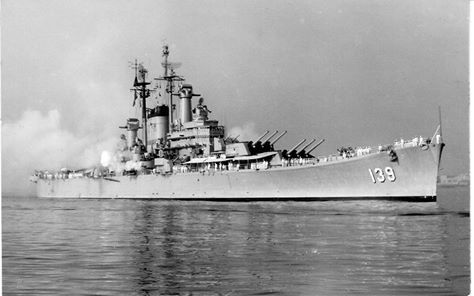 In 1956, Salem was designated as “permanent” Sixth Fleet flagship, and began her seventh Mediterranean tour in May. During this long cruise, she was present during crises over Suez in 1956 and Jordan in 1957. After more than two years abroad, the cruiser departed for the United States in June 1958. The 1958 Lebanon crisis interrupted her planned inactivation.

After briefly serving as flagship of the Second Fleet in the Atlantic, Salem made a final short visit to the Mediterranean Sea in September. She was decommissioned in January 1959 and placed in the Reserve Fleet at Philadelphia, Pennsylvania. Salem remained in “mothballs” there for over three decades. Stricken from the Naval Vessel Register in July 1991, in October 1994 she began a new career as a museum ship at Quincy, Massachusetts.

Inside the Hanger of the Salem