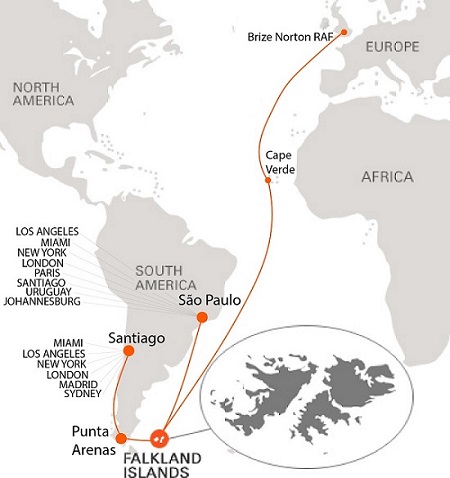 After suffering through six weeks of military defeats against Britain’s armed forces, Argentina surrenders to Great Britain, ending the Falklands War. The Falkland Islands, located about 300 miles off the southern tip of Argentina, had long been claimed by the British.

The Falkland Islands, located about 300 miles off the southern tip of Argentina, had long been claimed by the British. British navigator John Davis may have sighted the islands in 1592, and in 1690 British Navy Captain John Strong made the first recorded landing on the islands. He named them after Viscount Falkland, who was the First Lord of the Admiralty at the time. In 1764, French navigator Louis-Antoine de Bougainville founded the islands’ first human settlement, on East Falkland, which was taken over by the Spanish in 1767. In 1765, the British settled West Falkland but left in 1774 for economic reasons. Spain abandoned its settlement in 1811.

In 1816, Argentina declared its independence from Spain and in 1820 proclaimed its sovereignty over the Falklands. The Argentines built a fort on East Falkland, but in 1832 it was destroyed by the USS Lexington in retaliation for the seizure of U.S. seal ships in the area.

In 1833, a British force expelled the remaining Argentine officials and began a military occupation. In 1841, a British lieutenant governor was appointed, and by the 1880s a British community of some 1,800 people on the islands was self-supporting. In 1892, the wind-blown Falkland Islands were collectively granted colonial status.

Argentina based its claim to the Falklands on papal bulls of 1493 modified by the Treaty of Tordesillas (1494), by which Spain and Portugal had divided the New World between themselves; on succession from Spain; on the islands’ proximity to South America; and on the need to end a colonial situation.

The French navigator Louis-Antoine de Bougainville founded the islands’ first settlement, on East Falkland, in 1764, and he named the islands the Malovines.  In 1820 the Buenos Aires government, which had declared its independence from Spain in 1816, proclaimed its sovereignty over the Falklands.

TREATY OF TORDESILLAS – read more about it at:

In 1494, representatives of the crowns of Portugal and Spain met to divide the world between them. At the Treaty of Tordesillas, Portugal was given everything west of a meridian running between the Cape Verde islands in the mid-Atlantic and the new lands which Columbus had discovered.

From now on what amounted to the center of the world belonged to Portugal and the peripheries belonged to Spain. Thus Africa, the Indian Ocean and Brazil fell to the Portuguese, whereas Spain received the remainder of the Americas but also, for example, the Philippines. This is why people to this day speak Portuguese in Brazil but Spanish in Mexico and Peru. Spain and Portugal respected this agreement fairly conscientiously despite the fact that it was based on maps which were less than perfect. However, other European countries never did. When the Dutch Republic and England took over much of world trade in the seventeenth-century, the Treaty of Tordesillas became irrelevant. In the twentieth-century the Treaty of Tordesillas was invoked by Chile to support its claims to a chunk of the Antarctic, and by Argentina as a part of its claim to the Falkland islands, the Islas Malvinas, in the south Atlantic.

The Treaty of Tordesillas was only the first time that European powers met to divide the world between them in an orderly and civilized fashion. In the nineteenth-century Africa and China were divided in much the same way. [Read more: “The Berlin Conference“] At the end of the Second World War, the United States and the Soviet Union met to determine each other’s respective “spheres of influence.” On none of these occasions were the people who were divided asked for their opinion.

This landmark documentary was produced 5 years after the end of The Falklands War and features interviews and insights from both the Argentinian and British sides.

The British troops who died serving in the Falklands War 40 years ago will continue to be remembered, veterans have said.

In March 1982, Argentine salvage workers occupied South Georgia Island, and a full-scale invasion of the Falklands began on April 2. Argentine amphibious forces rapidly overcame the small garrison of British marines at the town of Stanley on East Falkland and the next day seized the dependent territories of South Georgia and the South Sandwich group.

Under orders from their commanders, the Argentine troops inflicted no British casualties, despite suffering losses to their own units. Nevertheless, Britain was outraged, and Prime Minister Margaret Thatcher assembled a naval task force of 30 warships to retake the islands. As Britain is 8,000 miles from the Falklands, it took several weeks for the British warships to arrive. On April 25, South Georgia Island was retaken, and after several intensive naval battles fought around the Falklands, British troops landed on East Falkland on May 21. After several weeks of fighting, the large Argentine garrison at Stanley surrendered on June 14, effectively ending the conflict.

Britain lost five ships and 256 lives in the fight to regain the Falklands, and Argentina lost its only cruiser and 750 lives. Humiliated in the Falklands War, the Argentine military was swept from power in 1983, and civilian rule was restored. In Britain, Margaret Thatcher’s popularity soared after the conflict, and her Conservative Party won a landslide victory in 1983 parliamentary elections.

Every SRAAM fired contains the machine soul of Margaret Thatcher that guides itself onto target.