Nasa article of 22 October 2021 reported about Ship 20 completed another milestone with its Static Fire testing.   The RVac engine fired up for the first time on a Starship. Then, it fired up again later during the evening, this time accompanied by a sea-level Raptor ignition.   Meanwhile, another milestone was achieved at the Orbital Launch Site (OLS), with the raise and installation of the Mechazilla stack and catch system –  as SpaceX presses down on the accelerator again for what Elon Musk is claiming as vehicle readiness for the orbital velocity attempt in November. 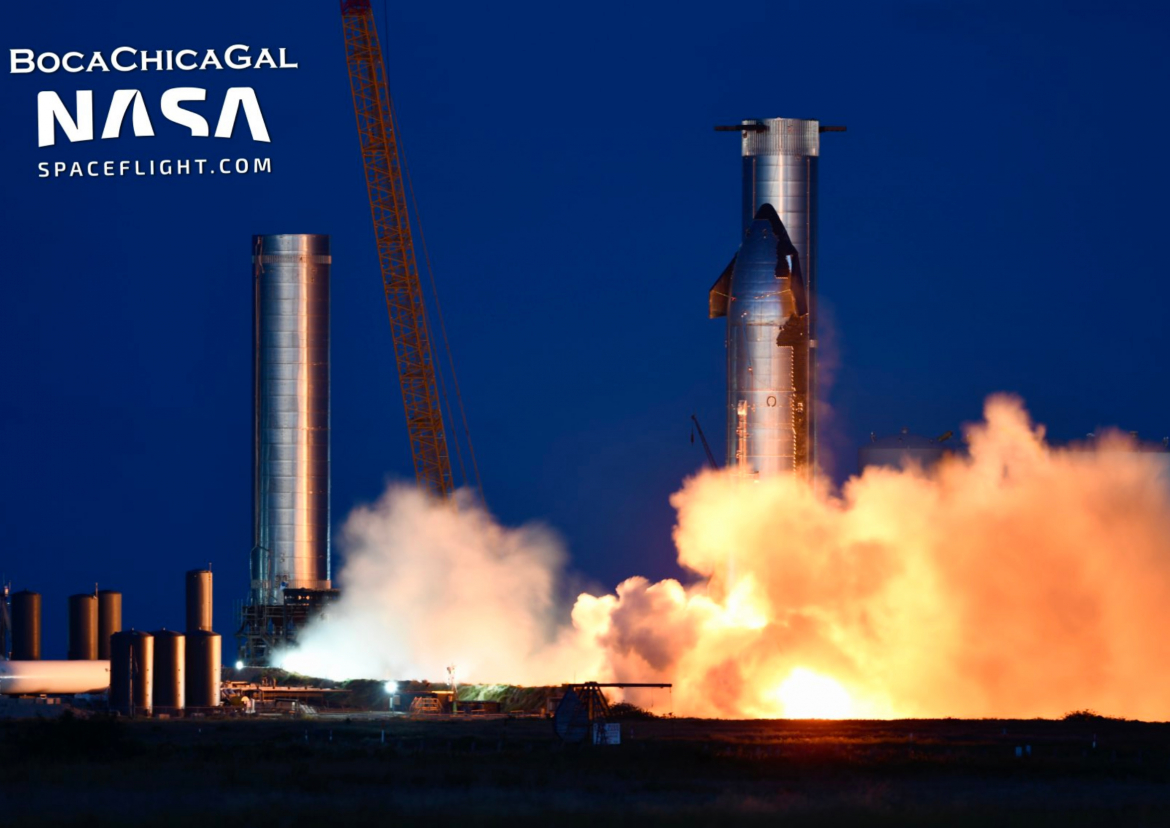 Ship 20 has been the main focus of attention, following the expected ground testing path of ensuring the Ship was ready for its big day ahead of the Super Heavy booster.

Ship 20 fires up its Raptor engines for the first time, first with a single engine firing of a Raptor Vacuum, and then with a two engine firing, one sea level, one vacuum.

The Super Heavy will require proof testing ahead of an unspecified number of Static Fire tests, likely surpassing the current record of three Raptors firing simultaneously, and by some margin.

With 29 engines lighting at launch – eventually evolving to 33 – SpaceX will have options to fire up subsets of engines during initial testing but will eventually fire all 29 at the same time either before or on launch day itself.

If Starbase works to Elon Musk’s latest schedule, these tests will come in short order, following his claim of vehicle readiness for the test flight. “If all goes well, Starship will be ready for its first orbital launch attempt next month, pending regulatory approval,” Musk noted on Twitter on Friday.

With additional rollouts down Highway 4, the OLS now has two sizeable liquid methane tanks stored next to the Tank Farm, which itself has seen the final cryo shell installed over the large vertical tanks.

One of the two recently delivered large Methane tanks was moved to the Launch Site, Skates for the Chopstick Carriage were installed on the Launch Tower, and Liquid Oxygen was delivered to the Orbital Tank Farm for the first time.

Mechazilla – as named by Musk – will provide several services to the Starship Program, starting with the ability to raise and stack the booster onto the Launch Mount, before then stacking Starship atop the booster. Along with the Quick Disconnect (QD) arm, it will also provide stability to the stack when on the mount.

Mechazilla’s Chopsticks and Carriage were lifted into place on the Launch Tower, new framing was spotted on Booster 4’s Raptor engines, and two of the recently constructed staircase sections were moved next to the High Bay.

Eventually, and by far its star role, Mechazilla will catch the Booster and Ship when they return to the launch site post-mission. This first attempt will not occur during the upcoming test flight, with both vehicles set to splashdown at the conclusion of their mission.

Booster 5’s Grid Fins have since been installed in the High Bay, with the completion of stacking operations set to be concluded in the coming days.

Ship 21, with its sections covered in TPS tiles, is currently being stacked inside the Mid Bay. Currently, its Mid-LOX section and Common Dome have been mated. It will eventually head to the High Bay for its nosecone installation.