South African President Cyril Ramaphosa, who currently chairs the security organ of the Southern African Development Community (SADC), ordered high-level envoys to fly to Eswatini to meet King Mswati III to discuss “security and political developments”.  The internet went offline at noon, as students, transport workers and civil servants extended protests that have ground the tiny nation to a halt for more than two weeks.    The internet shutdown made it difficult to share information about the protests, or to alert the families of the wounded and dead. 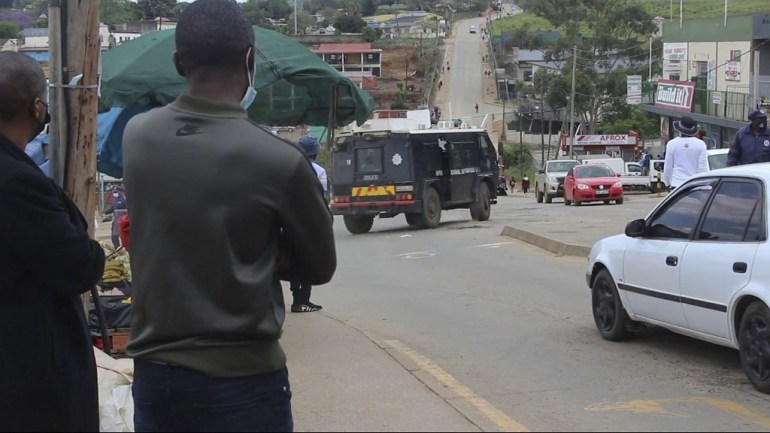 The Swazi nation is an amalgamation of more than 70 clans. Their chiefs form the traditional hierarchy under the ngwenyama and ndlovukazi, who are of the largest clan, the Dlamini. The amalgamation brought together clans already living in the area that is now Eswatini, many of whom were of Sotho origin, and clans of Nguni origin who entered the country with the Dlamini in the early 19th century. Traditional administration and culture are regulated by an uncodified Swazi Law and Custom, which is recognized both constitutionally and judicially. The language is siSwati, which is akin to Zulu, though it shares official status with English, which is in fact used generally for official written communication.

BENEFITS TO THE KING AND HIS FAMILIES

*
July 2021 – deaths and injured
The illegal crossing of Eswatini citizens into South Africa has intensified. Some are fleeing the civil unrest and others are crossing into the country to buy goods including food.
https://www.youtube.com/watch?v=oNWPGtJCd5c

June 2021 – protest actions are still going on against the Swaziland king.   They also did the same as what those did in Kwazulu-Natal and Gauteng.  Run from shop to shop and steal everything possible.  They are not hungry, because they can not eat television or furniture.

Compare those actions with the terrorism of a so-called “democratic South Africa” July 2021 and even before.

Pro-democracy protests are continuing in the country where residents demand electoral reforms.
https://www.youtube.com/watch?v=JHokEAhOceI

NOTHING HAS BEEN CHANGED

Reports say women and children are among casualties as King Mswati’s forces intensify shooting of protesting civilians. As protests continue to intensify, authorities have deployed security forces to crush dissent, closed schools indefinitely and instructed mobile telephone network companies to shut down the internet and social media platforms. Some reports say there is an uneasy calm in Eswatini after trust broke down between Mswati III and his subjects.

#Eswatini, a landlocked country nestled between #SouthAfrica and #Mozambique, was called “Swaziland” until 2018. The very last absolute monarchy on the African continent has been facing a growing wave of unrest since June 2021. What initially started as peaceful demonstrations was met with repression, violence and death. King Mswati III is being blamed for not listening to his subjects’ demand for a modern political system and more democracy. As the protest movement keeps growing, Caroline Dumay and her team bring us this report from the troubled monarchy.
https://www.youtube.com/watch?v=LkP6TcdqEqg

Public Sector Associations in eSwatini are expected to march to the Public Service Ministry in efforts to deliver a partition today. This comes after students boycotted classes and called for free schooling and the end of King Mswati III’s rule. eNCA speaks to General Secretary of the Swaziland National Union of Students Bafanabakhe Sacolo.

Please be warned, some of the visuals sent by citizens of eSwatini are graphic, and may upset some viewers. The situation in the Kingdom of eSwatini remains tense. Video of police shooting citizens are circulating on social media as pro-democracy protesters intensify their actions. They are calling for the release of two Members of Parliament arrested in July. Residents are demanding political and democratic reform in eSwatini.

Southern African countries have deployed envoys to Eswatini, formerly known as Swaziland to try to stem the unrest that saw one person killed and at least 80 people wounded by security forces in the latest wave of pro-democracy protests.   The demonstrations in the kingdom have flared up recently, months after authorities loyal to the country’s absolute monarch quashed an earlier round of demonstrations.

The delegation includes Jeffrey Radebe, a former South African government minister and Candith Mashego-Dlamini, South Africa’s deputy minister of international relations and cooperation, as well as representatives from Botswana and Namibia. The envoys will be accompanied by SADC Executive Secretary Elias Magosi and other senior SADC officials.

Gunfire was heard into the night on Wednesday in the Eswatini capital Mbabane, and the civil servants’ union NAPSAWU said at least one man had been shot dead earlier in the day. “The army and the police killed one person at about 3pm (13:00 GMT) today,” Oscar Nkambule, the president of the union, told the AFP news agency.

Fifty of its members were taken to hospital in Mbabane, with another 30 admitted to hospital in the city of Manzini, including some with gunshot wounds, he added.   Hundreds of soldiers and police began fanning through both cities early in the day, firing tear gas at even small gatherings of people and unleashing volleys of rubber-coated bullets, AFP reported.

Meanwhile, MTN Eswatini and other mobile network operators have been told to suspend access to Facebook and its messenger app until further notice, the Eswatini unit of MTN Group said in a statement.

“The business has implemented the directive and access to Facebook and Facebook Messenger has been suspended. … We will continue engaging with the relevant stakeholders to minimise the impact and duration of the service disruption,” MTN Eswatini said, without saying why it had been told to suspend access to Facebook.

Heavily armed soldiers and police were seen on the streets, while one Mbabane high school caught fire, sending plumes of smoke billowing over the city.

King Mswati III has ruled the landlocked nation since 1986 and owns shares in all of the country’s telecoms.   He is criticised for living a lavish lifestyle in one of the world’s poorest countries and is also accused of stifling political parties.

“The king is fighting for a war, he is making the country ungovernable by deploying the armed forces.”

Eswatini (out of control?)