According to ancient Greek mythology, Ikaria owes its name to Ikaros, the son of Daedalus who was the architect hired by Minos (King of Crete) to built the famous Labyrinth where the Minautor was held.    …  Ikaria, the legendary home of Icarus whose wings melted when he flew too near the sun, is home to 8,000 Greeks, many of whom live much longer than average. In fact, one in three Ikarians lives well into her 90s, and many here go on to become centenarians.  But not only do Ikarians live long, they also tend to be in more robust health and die naturally. 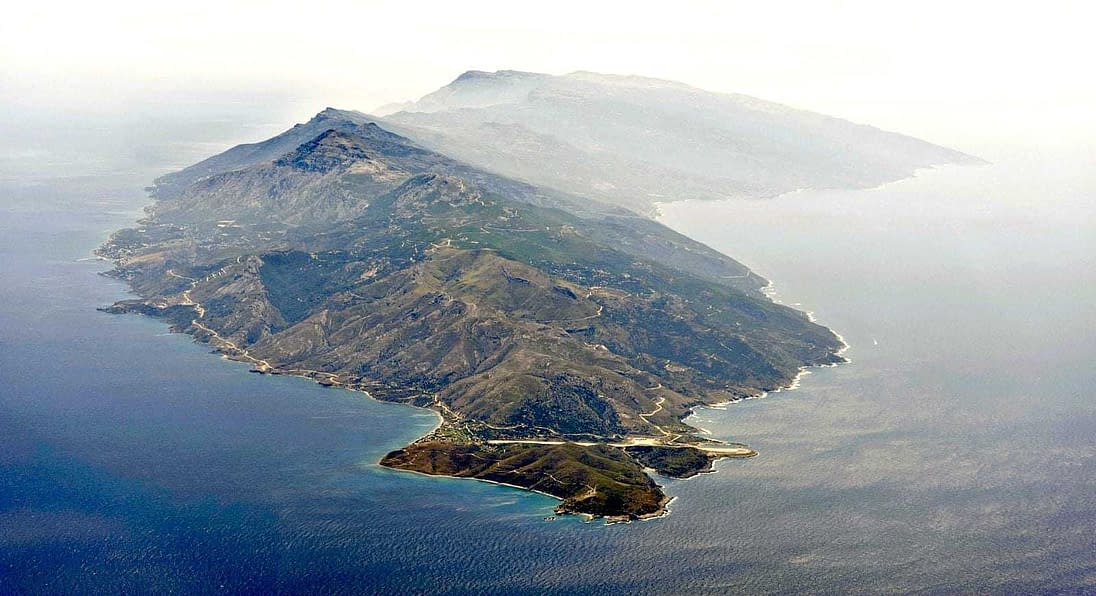 Since Daedalus and Ikaros were the only ones who knew how to escape from the Labyrinth, Minos forbade them to leave Crete, to avoid the spreading of the Labyrinth’s plans. Daedalus created wax wings for him and his son in order to fly away from the island. Ikaros, ignoring the advice of his father, fled too close to the sun, because he believed that he could be as strong as the gods and fly as high as them. His extreme pride made him careless and he got too close to the sun, his wings melted and he fell into the deep sea surrounding Ikaria, which was then named after him.

Archaeological evidence shows that the history of Ikaria starts in the 7th millennium BC when it was first inhabited. In the 6th century BC, Ikaria was a dependant of Samos. Since antiquity, the island was known for its spa springs. After the Persian War, Ikaria joined the Delian League and started flourishing to the point where temples such as the Temple of Artemis at Nas, were being built. This wealth declined after the Peloponnesian Wars, a period during which the inhabitants of the island suffered enormously from the numerous pirate raids.

In the 3rd century AD, Ikaria fell under the control of the Byzantine Empire. A couple of Byzantine castles and an odeon survive today from that era. But, by the end of the 12th century, the Byzantine Empire cut back its naval defense of the Aegean and the islands, among which Ikaria, a continuous pirate target, and the population moved inland, avoiding the coasts. In fact, they built Koskina Castle for their protection.

On 4 November 1912, Ikaria became officially liberated by the Greek Army and joined the rest of free Greece. The inhabitants of Ikaria were dissatisfied with the Greek government which did not invest in its development. They, therefore, cultivated self-sufficiency and received a lot of help from expats Ikarians to the USA and Australia. Till 1973 and the fall of the Greek Military Regime, Ikaria was used as an exiled land for political prisoners and mostly communists.

During the second world war, when the island was occupied by the Germans and Italians, there was a substantial loss of life through starvation. The villages affected were only those without olive groves around. As Stylianos Moulas, the priest of Aghios Polykarpos village said, “We owe our survival to olive oil.”

Olive harvesting is an important seasonal job of a typical Ikarian household. Every year from the end of October until February you’ll find many Ikarians out in the fields.

Ikarians who don’t have olive trees go and help those who do. Instead of money, they get olive oil in return. Often, they work a field of olive trees and give the owner half of the harvest.

Between Ikaria and Samos there is a sea channel of about 18 km width. To the south lies the complex of small islands Fournoi.  The administration of Ikaria belongs to the Region of North Aegean, while the island forms the Municipality Ikaria, with its capital the village of Agios Kirikos. The population is estimated at 8,423 inhabitants, according to the census of 2011.

Ikaria has an elongated shape with a NE-SW direction. Generally characterized as a mountainous island, with several intense geomorphic contrasts between bare cliffs and green valleys. Crossed by the sierra Atheras (or ‘ Pramnos’ ) of EW direction located at the center of the island and the highest peak is about 1,041 meters.

Ikaria is as an island with a great volume of water. Due to the geological and tectonic structure, the island has rich aquifers and many springs. There are about 65 springs that are used for water supply and 290 springs that are used for irrigation. Almost all the villages have their own springs, nevertheless there is an important number of drillings on the island. The abundance of groundwater, combined with the tectonic structure has created many caves,  which are well worth visiting.

This project will produce clean energy, which would solve the energy needs of Ikaria for decades. The net annual energy production of the Hybrid Energy Project will reaches 10,96 GWh, significantly reducing the need for local operation of the thermal power plant in Agios Kirykos.
Based on the innovative combination of two different forms of renewable energy:

Mesakti Beach is the best and most popular beach in Ikaria island in Greece. It is known for its large waves and many surfers choose this place for that reason. The video was shot from a DJI Phantom 3 Professional quadcopter and edited in Adobe Premiere Pro CC.

Less stress and crime – with olive oil, red wine, fresh caught fish, lots of vegetables and a better quality of life contribute to their long lives.    And do not forget the dancing.   The Oldest People In the World.