Poverty is all over in all countries, not only in Morocco or other African countries.  Even in South Africa.  If you want to go to another country, there are procedures to follow.     During May 2021 more than 8,000 people – mostly men, but also some women and children – entered Ceuta after swimming around a breakwater that extends into the Mediterranean Sea, or climbing over the border fence that separates the Spanish territory from Morocco.
Waar kry die man soveel geld om tatoeës te maak op sy lyf – as daar soveel vreemdelinge opdaag aan Morokko so kant, gaan immigrante verwelkom word?  Wie betaal vir al die immigrante, nie net hier nie, regdeur alle lande? 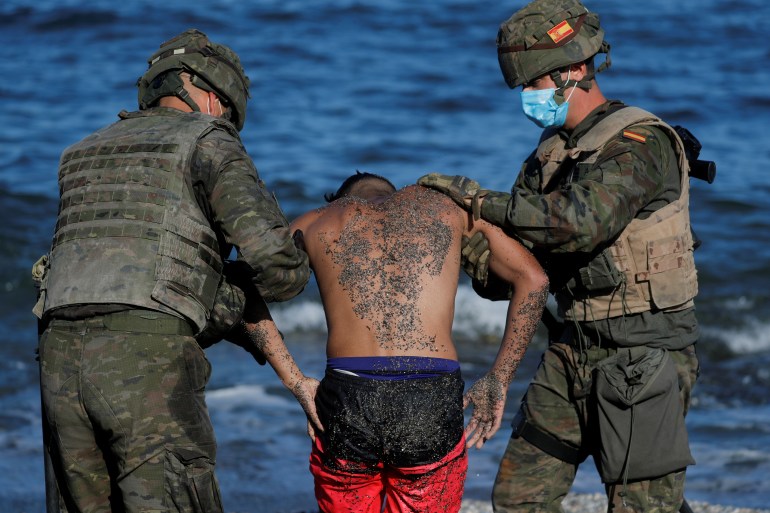 Is that fair to Spain or EU countries – will Morocco like that if thousands illegals enter their country? Most countries do have border control.

“We have never seen such an arrival of this magnitude,” said Red Cross spokeswoman Isa Brasero. “The city has the means to take care of all the people that arrive to its shores, but you never imagine that you will face this type of situation.” 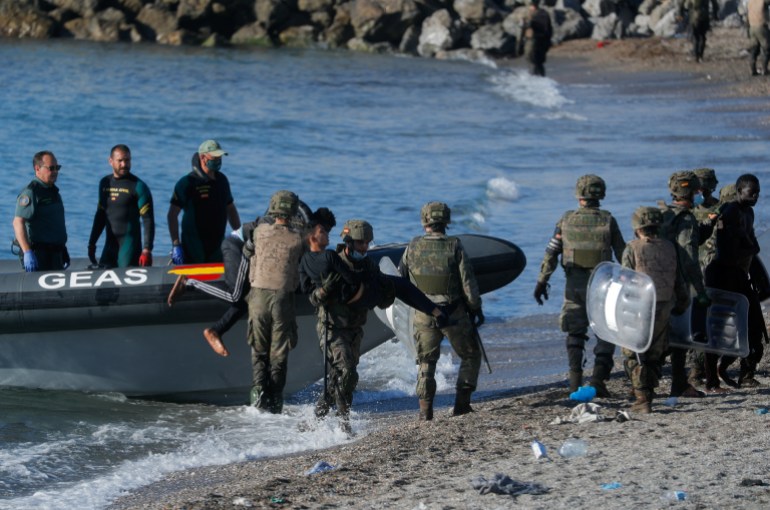 Among the arrivals were sub-Saharan Africans, who often migrate to flee poverty or violence at home and saw the suddenly porous border as a chance to avoid an even more deadly sea journey to the Spanish mainland.

In his address to Parliament, delivered a day after he visited Ceuta, Sanchez criticised Moroccan officials for a “lack of border control” in comments that could escalate a diplomatic row between his government and Rabat.

“This is an act of defiance,” he said. “The lack of border control by Morocco is not a show of disrespect of Spain, but rather for the European Union.”

Meanwhile, Spanish Foreign Minister Arancha González Laya said for the first time in public that Madrid believes Morocco loosened its border control in retaliation against a decision by Spain last month to give medical assistance to a rebel leader from Western Sahara, a disputed territory held by Morocco.

Spanish authorities were caught by surprise when large numbers of people began crossing the frontier on Monday as the Moroccan border forces looked the other way, quickly leaving the tiny territory overwhelmed.

Analysts said it was clear Morocco had turned a blind eye to the human tide entering Ceuta in order to put diplomatic pressure on Spain to recognise its sovereignty over Western Sahara.

“Morocco is playing with people’s lives. They must not use people, among them its own citizens, as pawns in a political game.”

At least 4,800 Moroccans adults were returned to Morocco, in line with a decades-old agreement between the two countries to expel all those who swim across the border.

Spain stepped up diplomatic pressure on Rabat Tuesday as its prime minister flew into #Ceuta, vowing to “restore order” in the North African enclave after a record 8,000 #migrants reached its beaches from #Morocco.

They are most of the time aggressive and think that to burn down things, will help them.  An unprecedented number of peopl have crossed the border over the past few days, with figures estimated to be around 8,000.

Police and security forces clashes with would-be migrants in the Spanish enclave of Ceuta, as they blocked access to the border.

Spanish tanks and soldiers are protecting the beaches of Ceuta after thousands of migrants crossed from Morocco into the Spanish enclave this week.