On 21 November 2013, at 11:27 a.m., a leaky ship arrived in Beirut’s port. It never left, and its volatile cargo would lead to tragedy in the city almost seven years later. The Rhosus was loaded with 2,750 tons of ammonium nitrate, which is believed to have blown up most of the port and damaged large parts of the city when it ignited in a warehouse on 4 August 2020. 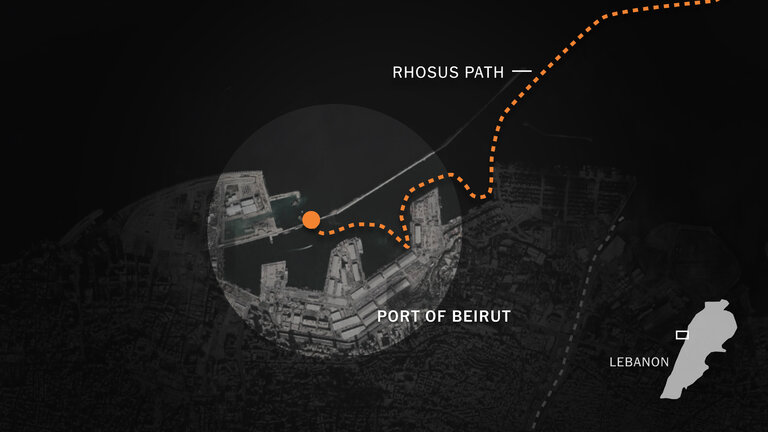 The Rhosus left for its last journey from Batumi, Georgia, in September 2013. Its cargo was destined for Mozambique, but the captain was ordered to make an unscheduled stop in Beirut to take on additional freight.

Captain Prokoshev said they needed to make extra cash to pay for their passage through the Suez Canal. Lawyers for the ship’s creditors said the additional cargo was supposed to be transported to Jordan.   In Beirut, port authorities impounded the 27-year-old ship after they found multiple deficiencies, according to a maritime news article from 2014. The captain and some of his crew were ordered to stay on board.

A photo from 2014 shows him with some of the 2,750 bags of ammonium nitrate in the port. These bags match the bags photographed later at the warehouse that eventually blew up, posted by a Lebanese journalist on Twitter after the incident. The warehouse pictures also show the name of the company: Rustavi Azot L.L.C. of Georgia, which is also listed on the 2013 shipping documents for the voyage.

The Rhosus was left abandoned, and Lebanese authorities transferred its cargo to a warehouse in the port. In 2015, the ship was moved 1,000 feet up the pier where it remained for about three years. Satellite images show a ship matching the dimensions of the Rhosus, with open cargo bays, indicating it is empty.   It can also be seen in the background of a picture posted on Twitter in March 2016, clearly recognizable through the yellowish color of the ship’s bridge.

The Rhosus was leaking badly and began sinking in February 2018. Within days, the ship was fully submerged. Stephen Wood, a satellite image expert at space technology company Maxar, analyzed an image from Feb. 18, 2018, for The Times. He used multi-spectral imagery that can penetrate water and better reveal submerged objects and features. The resulting image shows the ship in great detail, despite being underwater.

Authorities never removed the shipwreck on the northern edge of the port, where it did not seem to obstruct ship traffic. The Rhosus remained out of sight and forgotten until now. So was its explosive cargo, stored a mere 1,500 feet away in a warehouse. On Aug. 4, a fire ignited the ammonium nitrate, killing more than 150 and injuring thousands.

The former captain of the ship, Boris Prokoshev, told The New York Times that he heard from other sailors that the Rhosus sank in 2015 or 2016. This time frame turned out to be incorrect. Using satellite imagery analysis and ship tracking data, our Visual Investigations unit went back in time to follow the ship that brought the disastrous cargo to Beirut. We found its exact location, where it remains hidden a short distance from Beirut’s ground zero.

Fábrica de Explosivos Moçambique (FEM), a Mozambican explosives manufacturing company, told CNN that they were the ones who originally ordered the ammonium nitrate that was left at Beirut’s port for nearly seven years.

The order of ammonium nitrate was intended for manufacturing explosives for mining companies in Mozambique, the spokesperson said.

The ammonium nitrate never made it to Mozambique, the source said, and instead was kept in a container at Beirut’s port for over six years before exploding earlier this week. The catastrophic blast has resulted in widespread devastation to Lebanon’s capital city and left at least 154 dead, according to the Lebanese Health Ministry.

“The cargo was highly explosive. That’s why it was kept on board when we were there … that ammonium nitrate had a very high concentration,” Prokoshev said.

Russian-leased cargo ship carried ammonium nitrate to Beirut port in 2013 and left it after port dispute.     “They were being greedy,” said Boris Prokoshev, who was captain of the Rhosus in 2013 when, he says, the owner told him to make an unscheduled stop in Lebanon to pick up extra cargo.   Prokoshev said the ship was carrying 2,750 tonnes of ammonium nitrate, a highly combustible chemical compound, from Georgia to Mozambique when the order came to divert to Beirut on its way through the Mediterranean.   The crew were asked to load some heavy road equipment and take it to Jordan’s Port of Aqaba before resuming their journey to Africa, where the ammonium nitrate was to be delivered to an explosives manufacturer.   But the ship never left Beirut, the crew having tried and failed to safely load the additional cargo and the owners getting embroiled in a lengthy legal dispute over port fees.

“It was impossible,” said Prokoshev, 70, of the operation to try and load the extra cargo, speaking by phone from his home in the Russian resort town of Sochi on the Black Sea coast.   “It could have ruined the whole ship, and I said no.”

In 2013, after it became clear the additional cargo could not be accommodated, Lebanese authorities impounded the vessel for failing to pay port fees. Prokoshev and lawyers acting for some creditors accused the ship’s owner of abandoning the vessel without paying his outstanding debts to the port or the crew.

Nearly a year later, once the crew had disembarked, the ammonium nitrate was unloaded and put in a dock warehouse for safety reasons.

On Tuesday, that stockpile caught fire and exploded not far from a built-up residential area of the city. The huge blast killed more than 145 people, injured 5,000, flattened buildings and made more than a quarter of a million people homeless.

The ammonium nitrate was sold by Georgian fertilizer maker Rustavi Azot LLC and was to be delivered to a Mozambique explosives maker Fabrica de Explosivos.

Levan Burdiladze, the Rustavi Azot plant director, told Reuters that his company had only operated the chemical factory for the last three years and so he could not confirm whether the ammonium nitrate was produced there.

He called the decision to store the material in Beirut port a “gross violation of safe storage measures, considering that ammonium nitrate loses its useful properties in six months.”

According to Prokoshev, the ship had been leaking but was seaworthy when it sailed into Beirut in September 2013. However, he said Lebanese authorities paid little attention to the ammonium nitrate, which had been stacked in the hull in large sacks.

“I feel sorry for the people [killed or injured in the blast]. But local authorities, the Lebanese, should be punished. They did not care about the cargo at all,” he said.

According to Prokoshev, he received an email in May 2018 from a lawyer telling him the ship sank “recently.”

Prokoshev said the ship had a hole in the hull, and the crew, while on it, had to regularly pump water out to keep it afloat.

An analysis of a satellite image from February 2018 commissioned from space technology company Maxar by the New York Times showed the sunken ship a few hundred metres from the warehouse where its cargo was stored. The times reported that the ship sank between Feb. 16 and 18, 2018.