It is a real tragic – to those that lost their lives – condolences to the families and RIP.   To those injured, a speedy recovery from all this trauma.     The investigation is still ongoing.  The Lebanese government has placed officials in charge of Beirut port under house arrest a day after blasts that killed at least 100 people and injured nearly 4,000, reported local media on Wednesday.    Lebanese rescue workers dug through the rubble looking for survivors of a powerful warehouse explosions that shook the capital Beirut, killing 100 people and injuring nearly 4,000 in a toll that officials expected to rise.    NO FOOD !! 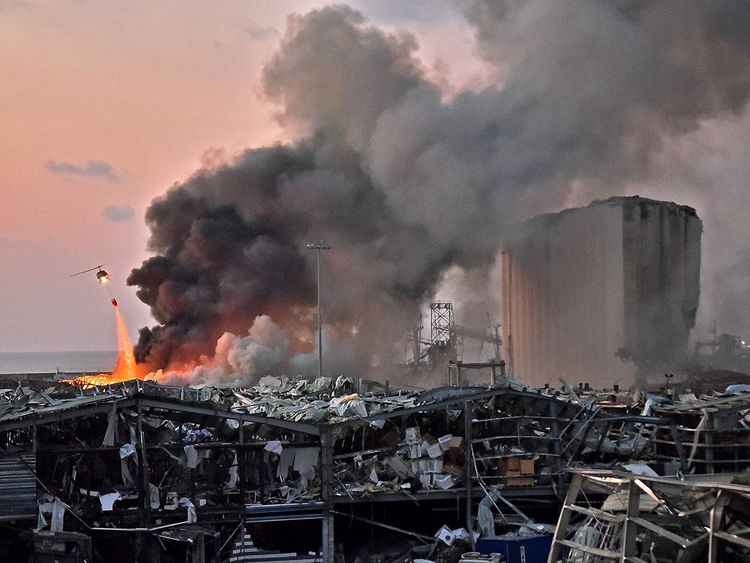 The massive warehouse blast that killed at least 100 in Beirut has also left up to 300,000 people homeless, the city’s governor said Wednesday — comparing the devastation to Hiroshima and Nagasaki.

“I think there are between 250,000 and 300,000 people who are now without homes,” governor Marwan Abboud told Agence France-Presse, estimating the damage to be $5 billion.

So far:
• #Israel has denied involvement
• #Lebanon General Intel Director stated chemicals where stored in the port after seizure from ship

Only thing confirmed thus far is the tragic magnitude of destruction pic.twitter.com/gXIiPwRi69

Meanwhile, fears abounded for children hurt and separated from their family members in Tuesday’s powerful explosions. Jad Sakr, Save the Children’s Country Director in Lebanon, said:

Jad Sakr, Save the Children’s Country Director in Lebanon, said: “We are shocked and devastated by the explosion today. The death toll may not be known for several days but what we do know is that in a disaster like this, children may be hurt, shocked and separated from their parents. Our Child Protection teams are ready to support the government’s efforts which will almost certainly go on for several days to come. It is vital that children and their families get access to the services they urgently need, including medical care and physical and emotional protection.”

Preliminary investigations, said an official, indicate that highly explosive materials stored in ward 12 were the cause of the blasts. Later, Lebanon’s prime minister said 2,750 tonnes of ammonium nitrate exploded in the port.

Lebanese Prime Minister Hassan Diab has called on brotherly and friendly countries to help his country. Those responsible for Beirut ‘catastrophe’ must be held to account, he added. “The warehouse in which the explosion occurred is dangerous and has been in existence for 6 years,” said Diab. Later, he said 2,750 tonnes of ammonium nitrate exploded in the port.

Countries around the world have been paying tribute to victims of two deadly blasts in Beirut on Tuesday and sending offers of assistance to Lebanon, a country already reeling from the effects of overlapping crises before disaster struck its capital.   Countries in the Gulf paid tribute to victims as well, with Qatar saying it would send field hospitals to support Lebanon’s medical response.

Field hospitals would be dispatched, the report added.

Elsewhere in the Gulf, the United Arab Emirates’ Minister of State for Foreign Affairs Anwar Gargash tweeted that “our hearts are with Beirut and its people”.   He posted the tribute alongside an image of Dubai’s Burj Khalifa, the world’s tallest building, illuminated in the colours of the Lebanese flag.   “Our prayers during these difficult hours are that God… protects brotherly Lebanon and the Lebanese to reduce their affliction and heal their wounds,” he wrote.   Gulf countries including Qatar and the UAE maintain close ties with Beirut and have long provided financial aid and diplomatic assistance to mediate Lebanon’s political and sectarian divisions.   Bahrain’s foreign ministry urged its nationals in Lebanon to contact the ministry’s operations centre or Manama’s representative in Beirut, while Kuwait ordered its citizens to take extreme caution and stay indoors.   It also asked those in need of assistance to contact their embassy.

The United Nations High Commissioner for Refugees extended his best wishes after the tragedy in Beirut.    “France stands and will always stand by the side of Lebanon and the Lebanese. It is ready to provide assistance according to the needs expressed by the Lebanese authorities,” French Foreign Minister Jean-Yves Le Drian said in a tweet after the incident in Beirut which left scores dead and wounded thousands more.    In the United States, the State Department was closely following reports of an explosion in Beirut and stands ready to offer ‘all possible assistance’, a spokesperson for the agency said   The State Department has no information about the cause of the explosion, the spokesperson said and added that the agency is working closely with local authorities to determine if any US citizens were affected in the incident.       In Britain, Prime Minister Boris Johnson said his country stood ready to provide any support it could to help.

“The pictures and videos from Beirut tonight are shocking,” Johnson wrote on Twitter. “All of my thoughts and prayers are with those caught up in this terrible incident.   “The UK is ready to provide support in any way we can, including to those British nationals affected.”

Israel offered humanitarian aid to Lebanon, with which it is still technically at war, after Tuesday’s explosions.   “Following the explosion in Beirut, Defense Minister Benny Gantz and Foreign Minister Gabi Ashkenazi, on behalf of the State of Israel, have offered the Lebanese government — via international intermediaries — medical and humanitarian aid, as well as immediate emergency assistance,” said a joint statement from the two ministries.      Meanwhile, Iran’s top diplomat expressed Tehran’s support for the “resilient” people of Lebanon after the blasts.   “Our thoughts and prayers are with the great and resilient people of Lebanon,” Iranian Foreign Minister Mohammad Javad Zarif tweeted.

A BBC reporter in Beirut was online conducting an interview when the #BeirutBlast took place.

This is horrifying to watch 😥@akhbarpic.twitter.com/0MNp4dOhha