Blame game, same as in South Africa – Who are the elites that are involved here?    In a video clip Kembo Mohadi said Zanu PF is failing to run the economy because the white man never gave them the knowledge to run the economy. The video was shown on the state broadcaster ZBC. 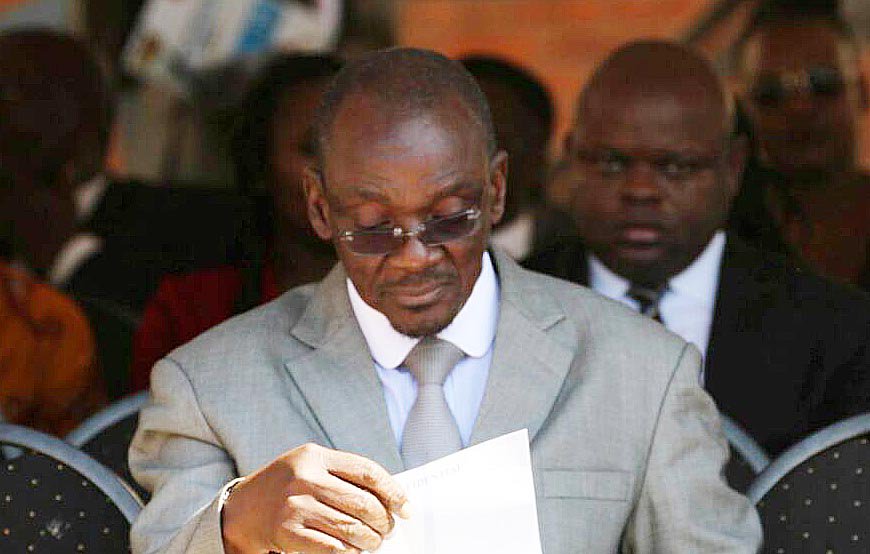 He also blamed the country’s detractors for sabotaging the economy. Mohadi said Government is not responsible for the collapse of the economy.

Upon independence in 1980, Robert Mugabe’s government moved cautiously to alter the pattern of management that it inherited from the white minority regime. The first budget of July 1980 was described by the finance minister as “conservative [with] a mild and pragmatic application of socialism.”

But the white minority had passed on government machinery that included many levers of economic power. While the members of the white minority were by inclination wedded to a system of private enterprise, they had evolved a system of government intervention to support infant industries and maintain agricultural prices through marketing boards. The need to cushion the blows dealt by economic sanctions during UDI brought acceptance of the imposition of exchange and import controls.

Zimbabwe’s economy began experiencing a decline in the 1990’s that accelerated in the early 2000’s.

The Mugabe administration’s problematic program of land reform – which sought to hasten the slow reallocation of farmland from the white minority to black Zimbabweans –  began in the 1990’s, gathered speed after 2002, and is one of the most-often-cited causes for the economic decline, but other factors also played a role.

Mugabe’s controversial 1998 decision to intervene in the Democratic Republic of the Congo’s civil war not only cost the Zimbabwean economy hundreds of millions of dollars but also resulted in the suspension of international economic aid for Zimbabwe. Aid and loans to the country were withheld in later years in protest of the land reform program and violations of human and political rights and in response to Zimbabwe’s inability to repay previous loans. Economic mismanagement, rampant inflation, and record-high rates of unemployment complicated the worsening economic situation.

Zimbabwe’s economy depends heavily on its mining and agriculture sectors. Following a contraction from 1998 to 2008, the economy recorded real growth of more than 10% per year in the period 2010-13, before falling below 3% in the period 2014-17, due to poor harvests, low diamond revenues, and decreased investment. Lower mineral prices, infrastructure and regulatory deficiencies, a poor investment climate, a large public and external debt burden, and extremely high government wage expenses impede the country’s economic performance.

Until early 2009, the Reserve Bank of Zimbabwe (RBZ) routinely printed money to fund the budget deficit, causing hyperinflation. Adoption of a multi-currency basket in early 2009 – which allowed currencies such as the Botswana pula, the South Africa rand, and the US dollar to be used locally – reduced inflation below 10% per year.

In January 2015, as part of the government’s effort to boost trade and attract foreign investment, the RBZ announced that the Chinese renmimbi, Indian rupee, Australian dollar, and Japanese yen would be accepted as legal tender in Zimbabwe, though transactions were predominantly carried out in US dollars and South African rand until 2016, when the rand’s devaluation and instability led to near-exclusive use of the US dollar. The government in November 2016 began releasing bond notes, a parallel currency legal only in Zimbabwe which the government claims will have a one-to-one exchange ratio with the US dollar, to ease cash shortages. Bond notes began trading at a discount of up to 10% in the black market by the end of 2016.

Zimbabwe’s government entered a second Staff Monitored Program with the IMF in 2014 and undertook other measures to reengage with international financial institutions. Zimbabwe repaid roughly $108 million in arrears to the IMF in October 2016, but financial observers note that Zimbabwe is unlikely to gain new financing because the government has not disclosed how it plans to repay more than $1.7 billion in arrears to the World Bank and African Development Bank. International financial institutions want Zimbabwe to implement significant fiscal and structural reforms before granting new loans. Foreign and domestic investment continues to be hindered by the lack of land tenure and titling, the inability to repatriate dividends to investors overseas, and the lack of clarity regarding the government’s Indigenization and Economic Empowerment Act.

Ordinary Zimbabweans have suffered for years as a result of currency manipulation and corruption by the elites who have siphoned US dollars away into their overseas bank accounts. Now, a recent ruling by the Zimbabwe Supreme Court, declaring that up until February 2019, the US dollar and Zimbabwe RTGS dollar were valued at 1:1, has provided another windfall for the rich. In a country in the throes of a deepening food crisis, it will also deepen the economic meltdown at the expense of human rights.

Land grabs are also happening in other African countries.   ZIMBABWE!   It is a serious point to destroy food security as well, is happening here in SA too.  No farmer – No food.  The ANC do have already 5000+ farms, they bought since 1994 in South Africa – what happened to all those productive farms?   Another point – why did the ANC not rehabilitate the old mines – there are more than 6000 open cast mines not in use anymore, but nobody can use that lands at all –  the governments  have enough money to rehabilitate them to farm.  Do they really care what happen after the mines have been closed down?   What happened in African countries, are there rehabilitation on their mining lands, previously used for agricultural purposes?   Minerals are not food and can not take the hunger away.